Žibuoklė Martinaitytė. Photo: Tomas Terekas
I am looking at the pages of the score of the newest Žibuoklė Martinaitytė’s opus for symphony orchestra Saudade. Even the performance directions – “with palpable inner longing,” “when heart is filling up with impossibility,” “with nostalgia for things faraway,” “overwhelmed by the sudden wave of emotions” – can be perceived as music. And music in the listener’s imagination can turn into an image: a multitude of small motifs or micro-movements reminiscent of a huge swarm of birds overshadowing the sun (Sort Sol for two string quartets, 2016); the electronic part depicting the structure of Pinwheel Galaxy in the piece Illusions of Time and Space (for string quartet and recording, 2006); the canvas of orchestral overtones “blooming in a thousand flowers” (Millefleur for symphony orchestra, 2018). Occasionally, the composer envelops her music in images herself – as in the over-an-hour-long suite In Search of Lost Beauty... (for violin, cello, piano, recording and video, 2016) where the music is accompanied throughout by the video made by herself. Alternatively, she as if paints music by revealing the ideas and programmatic moments of her compositions in vivid, imaginative sentences. The fact that this composer has something to say not only through the sounds of music but also in writing is attested to by her New York diaries that for several years appeared in the weekly newspaper Literatūra ir menas (Literature and the Arts). 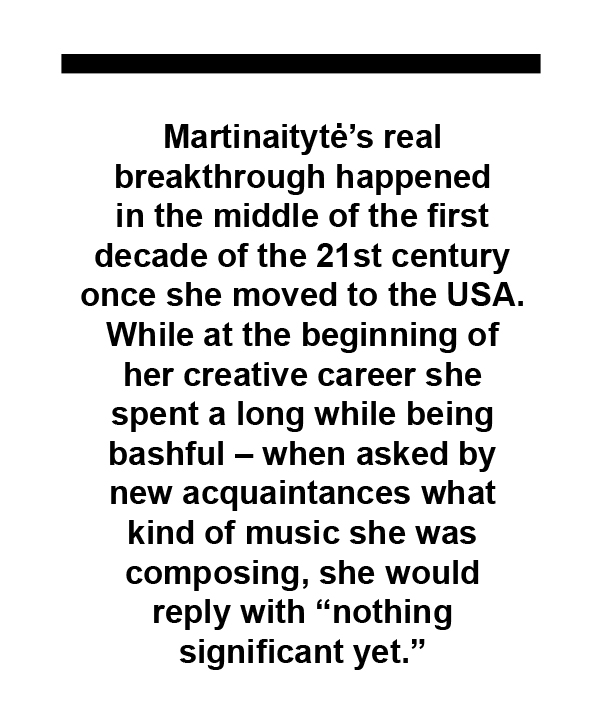 At the beginning of her creative career, even after the completion of composition studies in 1997 (at the Lithuanian Academy of Music and Theatre under Prof. Julius Juzeliūnas), Žibuoklė Martinaitytė spent a long while being bashful – when asked by new acquaintances what kind of music she was composing, she would reply with “nothing significant yet.” But even then, there was something to listen to in her opuses. It was rather extroverted music filled with concentrated energy and surprising with unusual instrumentations and ‘angular’ timbral combinations, sometimes even aggressive-sounding, but it exuded inner anxiety rather than industrial cold. The effect of the works of this early period would be best expressed with the title of one of them, Attention! High Tension! (for tuba and piano, 2001).

But Martinaitytė’s real breakthrough happened in the middle of the first decade of the 21st century once she moved to the USA. Increasingly, her music started to be performed by Lithuanian and foreign soloists, ensembles, choirs and orchestras, such as New Pacific Trio, The New Paths Chamber Ensemble, Ergo Ensemble, Lithuanian National Symphony Orchestra, Lithuanian State Symphony Orchestra, Kaunas City Symphony Orchestra, Lithuanian Chamber Orchestra, Pacific University Symphony Orchestra, Silesian Philharmonic Choir, San Francisco’s Volti Choir, among others. One of the most important pieces in the development of Martinaitytė’s work is the elegy dedicated to the memory of her deceased father Completely Embraced by the Beauty of Emptiness (for large ensemble, 2006). That same year, she wrote the Concerto for accordion and chamber orchestra that was very different in mood, entitled precisely that – Breakthrough. These events marked the beginning of what she calls the ‘blue period’ of her creative path – which continues until present time (the rich blue colour of the packaging and booklet of Martinaitytė’s debut album, the CD Horizons released in 2017 by Music Information Centre Lithuania, also symbolically reflects that). In the balance of musical means of expression, there was now less bravura; more contemplation and depth emerged, while the harmonic palette acquired more neo-romantic and impressionistic colours. 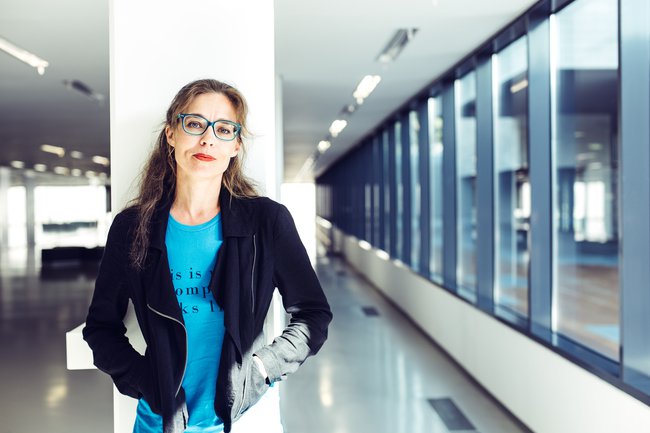 Žibuoklė Martinaitytė at the National Gallery of Arts in Vilnius. Photo: Tomas Terekas
In her current work, perhaps three areas can be distinguished. The first includes lavish orchestral opuses for philharmonic venues (Thousand Doors to the World for symphony orchestra, 2009; Horizons for symphony orchestra, 2013; Chiaroscuro Trilogy for piano and string orchestra, 2017). The second comprises comebacks – as if to the inevitable reality we are in, to the aesthetics of the ‘high tension’ period (Unique Forms of Continuity in Space for 2 pianos and 2 percussionists, 2017; the piece depicting the metropolitan everyday American Hodgepodge for ensemble and electronics, 2011), or such experiments as Ping Pong Concerto (for chamber orchestra and 4 table tennis players, 2011). The third area is journeys through soundscapes for more intimate concert spaces. Belonging here are choral (The Blue of Distance, 2010; Chant des Voyelles, 2018) and chamber instrumental (Incessant Confluences for flute and piano, 2014; Flashes of Illumination for piano, 2016) pieces; in the latter category, small ensembles are often complemented by organically sounding electronics. 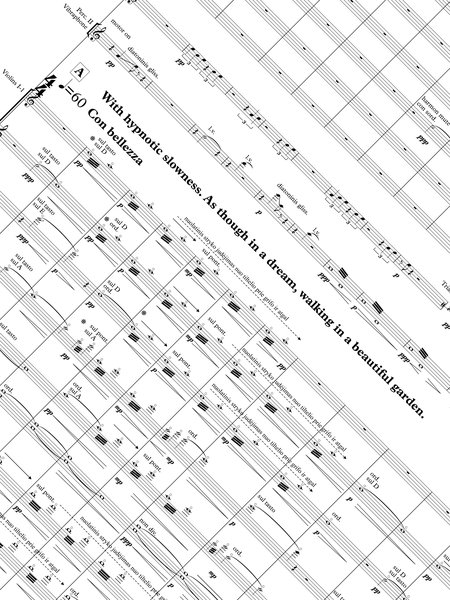 The symphonic score by Žibuoklė Martinaitytė. Millefleur (2018)
One such is her opus magnum, In Search of Lost Beauty ..., released as a CD album in 2019 by the American label Starkland (performed by the trio FortVio, which delivered the premiere of the piece in 2016: Ingrida Rupaitė-Petrikienė – violin, Povilas Jacunskas – cello, Indrė Baikštytė – piano). That same year Martinaitytė won two golden Global Music Awards for this album – Best Album and Best Composer. Two of the six larger movements of this continuously developed cycle are the incorporated and adapted earlier pieces (Serenity Diptychs, 2015; and Inhabited Silences, 2010); and those key movements are linked into a continuous, seamless musical canvas by electronic interludes. Perhaps it resembles some ideas of progressive rock concept albums (I suspect, the fans of that music style would love this, too). The composer describes the whole as visualised audio meditations / audiovisual short stories on the subject of beauty, “as if moving into another time dimension, where reality swaps places with reflections and shadows. The range of ephemeral beauty quest encompasses nature, objects of everyday life and art. The project In Search of Lost Beauty ... has emerged as a counterweight to the increasingly hurried culture and everyday life of the technology age. When people come to museums to see art, they only stop for a few seconds, and that minuscule amount of time is spent taking pictures in front of a masterpiece. There appears to be no time left to look at and truly comprehend the work of art. The same thing is happening with us in nature – when we see some amazing natural phenomenon, we often fail to dedicate the amount of attention to it that it deserves because we only care about how to capture it. We do not even bother to ask if we will have time to look at the whole archive of documented moments later. So, these ‘searchings for beauty’ as if force us to suspend our daily perception and accelerated mind, often operating in autopilot mode.”

The author of the CD sleeve notes, American composer Ingram Marshall, wrote: “Over the course of some seventy minutes, Martinaitytė has created a world of hidden beauty in a bridge-like form that begs you to enter. [...] The work is delivered in sections, which gives it an almost symphonic structure, but I would caution the listener to listen to the whole thing first; then the parts can be heard for their own sake and that’s a revelatory thing too. She uses technology in a masterly way but is never beholden to it. If I were to pinpoint specific places where this kind of digital delay or that kind of timbral processing were in force, I would be committing the sin of confusing the essence of the sounds with a mere description. The inner workings of this music are elusive but worth digging up with sharply tuned ears. In reference to the sectional aspect of the piece, it’s worth listening to it as a series of narratives or special stories. Or, as she said, “storyless narrative.” If this music transports you into a haunting, mysterious dream world, don’t worry about it – it’s only doing its job.” 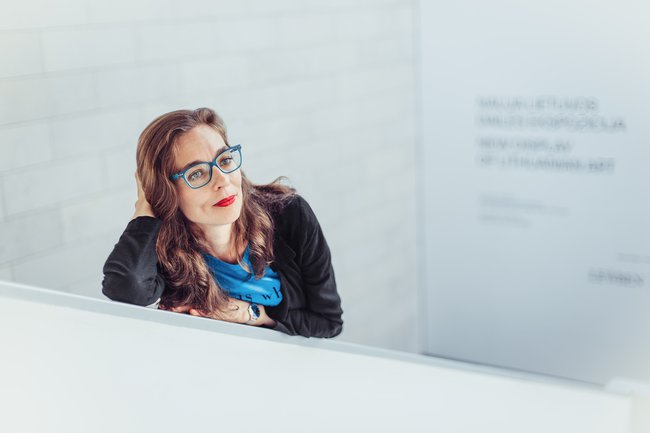 Photo: Tomas Terekas
Richard Allen from the music review portal A Closer Listen states: “The latest work from New York-based Lithuanian composer Žibuoklė Martinaitytė is a gorgeous, slowly-building suite that invites listeners to lose track of time. The tracks range from a minute to a quarter hour, but the transitions are virtually invisible: segues between scenes. When the journey is over, one is stunned to realize that seventy minutes have passed. [...] In the final minutes, the catchiest passages appear once more, tumbling back on themselves like folded time. A couple minutes later, the album will end, but it can be crumpled and un-crumpled, leaving mirrored reflections, tracks pressing into tracks, minutes into minutes, memories into memories. Did we recover that lost beauty? Or was the beauty in the search?” 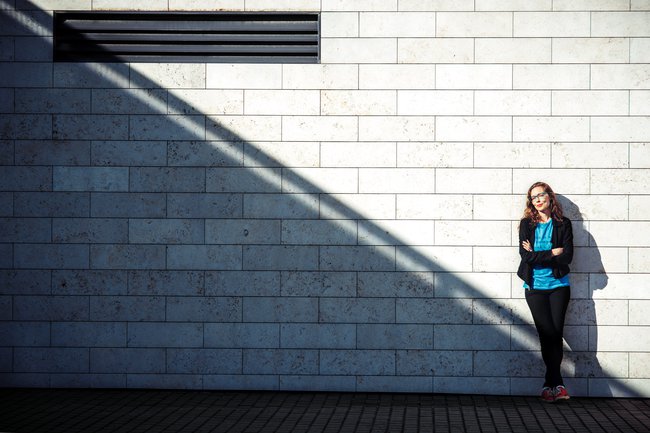 Photo: Tomas Terekas
Or in the longing for something that is (almost) out of reach. As you may have noticed, the reappearing leitmotifs in Martinaitytė’s work are emptiness, loneliness, silence, tranquillity, transience, longing, memories, distances... And these are never empty sentimental words – the existential anxiety and blissful sadness emanating from her music are what convinces. In the programme note to her new symphonic opus Saudade (premiered at the Gaida Festival in 2019), the composer writes: “According to the writer A. F. G. Bell, the famous saudade of the Portuguese is a vague and constant desire for something that does not and probably cannot exist, for something other than the present, a turning towards the past or towards the future; not an active discontent or poignant sadness but an indolent dreaming wistfulness. Saudade has evolved into a philosophical concept that means “nostalgia for nostalgia”, a meta-nostalgia, a longing towards the longing itself. As poetess Florbela Espanca put it, “I long for the longing I don’t have.” In my personal experience, this notion of saudade symbolises the stratum of multiple yearnings that have started layering with the ‘blue period’ – the death of my father and immigration to the USA. For the last decade, this thread of longing has been woven into my life colouring all experiences with the myriad hues of blue.”

As I was finishing writing this text, I saw a rare phenomenon: a fireball meteor flying over my home city, eventually disintegrating into smaller fragments. It is symbolic – and not only because of the astronomical themes that are sometimes found in Martinaitytė’s works. Her music can both shine in vivid colours and make one yearn for something that was felt or perhaps understood when listening to it as if we saw something astonishing that we can’t really bring back, which no longer belongs to us, just like that glow of a fireball.

Translated from the Lithuanian by Julija Gulbinovič