Vilnius Municipal Choir Jauna Muzika at Vilnius Book Fair. Photo: Tomas Terekas
Between the years of 1988 and 1991, the Baltic countries were living a ‘singing revolution’ – a peaceful mass movement for their independence from the Soviet Union. Named after commentary on the spontaneous crowd singing during the Tallinn Song Festival, this movement with its numerous demonstrations, rallies and patriotic songs soon took over the squares and parks of all three Baltic capitals. In the context of such events, two independent professional choirs were formed in Lithuania in 1989, Jauna Muzika and Aidija, which had a privilege to disregard conventions and routine habits of the local choral singing tradition and so were able to boldly dive into new practices. At present, both chamber choirs are the strongest and most active vocal ensembles in Lithuania, always invited where skill, intuition and determination to perform previously untested experiments in new music are needed. From the beginning, both mixed choirs have been innovative, full of new initiatives, constantly guided by their creative impulse and marked by their professional work and will, the characteristics that were changing the choir music landscape of Lithuania. On the other hand, the cultural field of Lithuanian choirs, their shift, rapid development and the variety of repertoire were also shaped by prominent Lithuanian composers who wrote music for them. 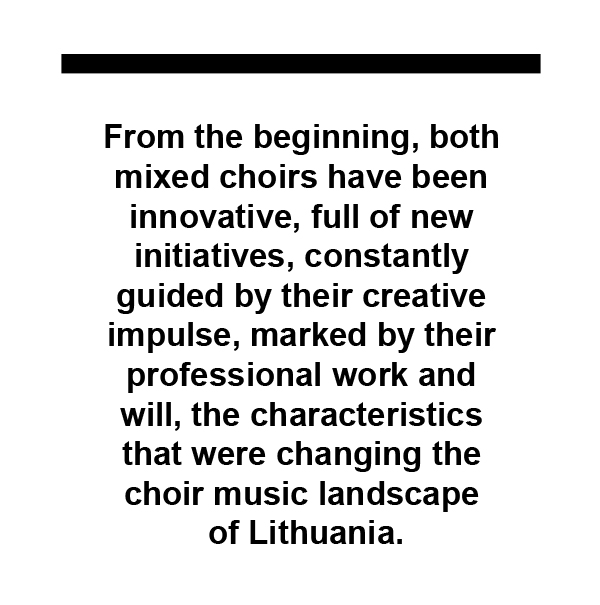 Vilnius City Municipal Choir Jauna Muzika (Young Music) is led by Vaclovas Augustinas (b. 1959), who has been with the choir from the beginning and has held the baton of an artistic director and conductor since 1992. “While I was one of the choir members, I just liked the company of people there, the artistic ambitions of the choir, quite a high level of it. I came to lead it gradually, unnoticeably. There was no clear dividing line between the ‘choir member’ and the ‘leader,’ recalls Vaclovas Augustinas. “In the first year, things were developing somehow unaided, without my clear understanding of what was going on. Trips, competitions, adventures, excitement, accomplishments, euphoria, sometimes frustration – everything was happening on the level of instincts and emotions. Over the years, consciousness was growing – both mine and the choir’s, self-awareness was deepening and the level of professionalism increasing. Little by little, we stopped going to competitions, focusing instead more on the conceptuality, integrity and stylistic direction of our concert programmes. Invitations to festivals and tours abroad at the professional level became increasingly frequent. So did the collaborations with orchestras, and thus the trust of Jauna Muzika among composers grew.” 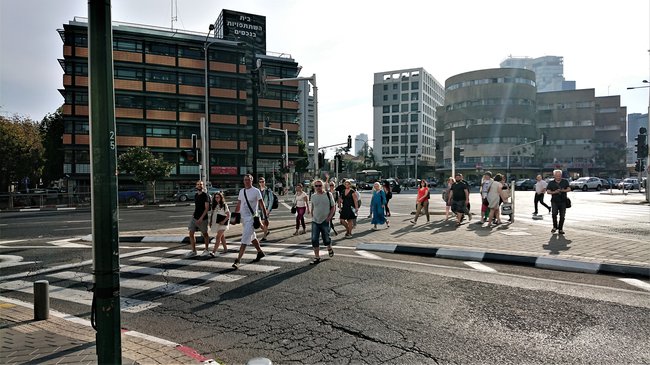 Jauna Muzika concert tour in Israel. Photo: from the choir's archive
Although the repertoire of Jauna Muzika includes scores of masters from all epochs of Western music history, the choir pays great attention to the works of Lithuanian composers: from harmonised folk songs by the national music classic Mikalojus Konstantinas Čiurlionis to large-scale conceptual compositions by contemporary Lithuanian composer Justė Janulytė or the ‘melancholy blue’ sound swarms by Žibuoklė Martinaitytė. According to the choir leader, over the past 30 years, a number of notable friendships with composers Algirdas Martinaitis, Raminta Šerkšnytė, Vidmantas Bartulis and others have developed and continue today. Augustinas remembers: “I am happy that we were the first to perform Justė Janulytė’s Radiance (2015) or Žibuoklė Martinaitytė’s The Blue of Distance (2010). After all, it proves that we are trusted. We have a reputation for being able to prepare sophisticated contemporary scores.”

Nonetheless, Jauna Muzika weaves between different epochs and styles, producing one programme with the alternative world music band Merope and diving into archaic folk songs, and the next with American post-minimalist David Lang, together reproducing the hypnotic effect of his music. “We are quite versatile,” says the choir director, “though I think we should no longer take on early music (because it requires narrower specialisation), gospels, spirituals, pop show style... Of course, with some rare exceptions. The tendencies of the choir’s repertoire are changing – although I personally find the music of the 20th and 21st centuries the most interesting.” 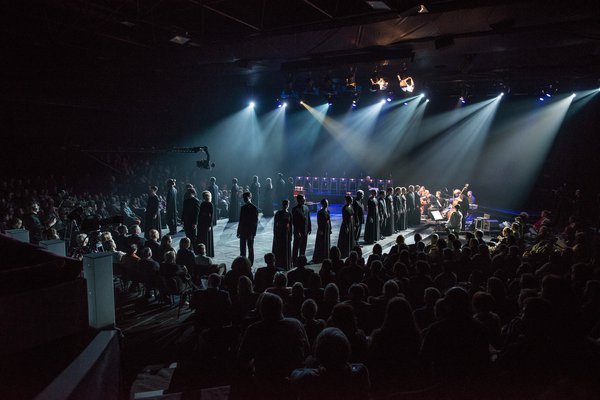 A concert for the 25th anniversary of the choir Jauna Muzika. Photo: Rytis Šeškaitis
Vaclovas Augustinas is a multifaceted figure in Lithuanian music: he is also a rock musician who has played with the legendary Lithuanian bands Antis and Saulės Laikrodis (Sundial), and a composer whose works are eagerly included by various choirs and music publishers into their repertoire, as well as professor and head of the Department of Composition at the Lithuanian Academy of Music and Theatre. For at least the last two reasons, the focus of the choir Jauna Muzika is the development and promotion of Lithuanian choral music. For more than a decade, Jauna Muzika together with the Lithuanian Composers’ Union has been organising the young composers’ choral music competition Vox Juventutis, providing debut authors with a practical creative platform.

Vox Juventutis constantly attracts the attention of young composers. A competition of such format is probably one of the best ways to practice, test one’s knowledge, discover one’s unique composing style, and test one’s ability to write choral scores that are then performed by the professional choir, Jauna Muzika, in concert. For emerging composers, this is an opportunity to experiment, to get acquainted with the peculiarities of choir singing, the possibilities of the human voice, and for Lithuanian choirs – a chance to discover new names. 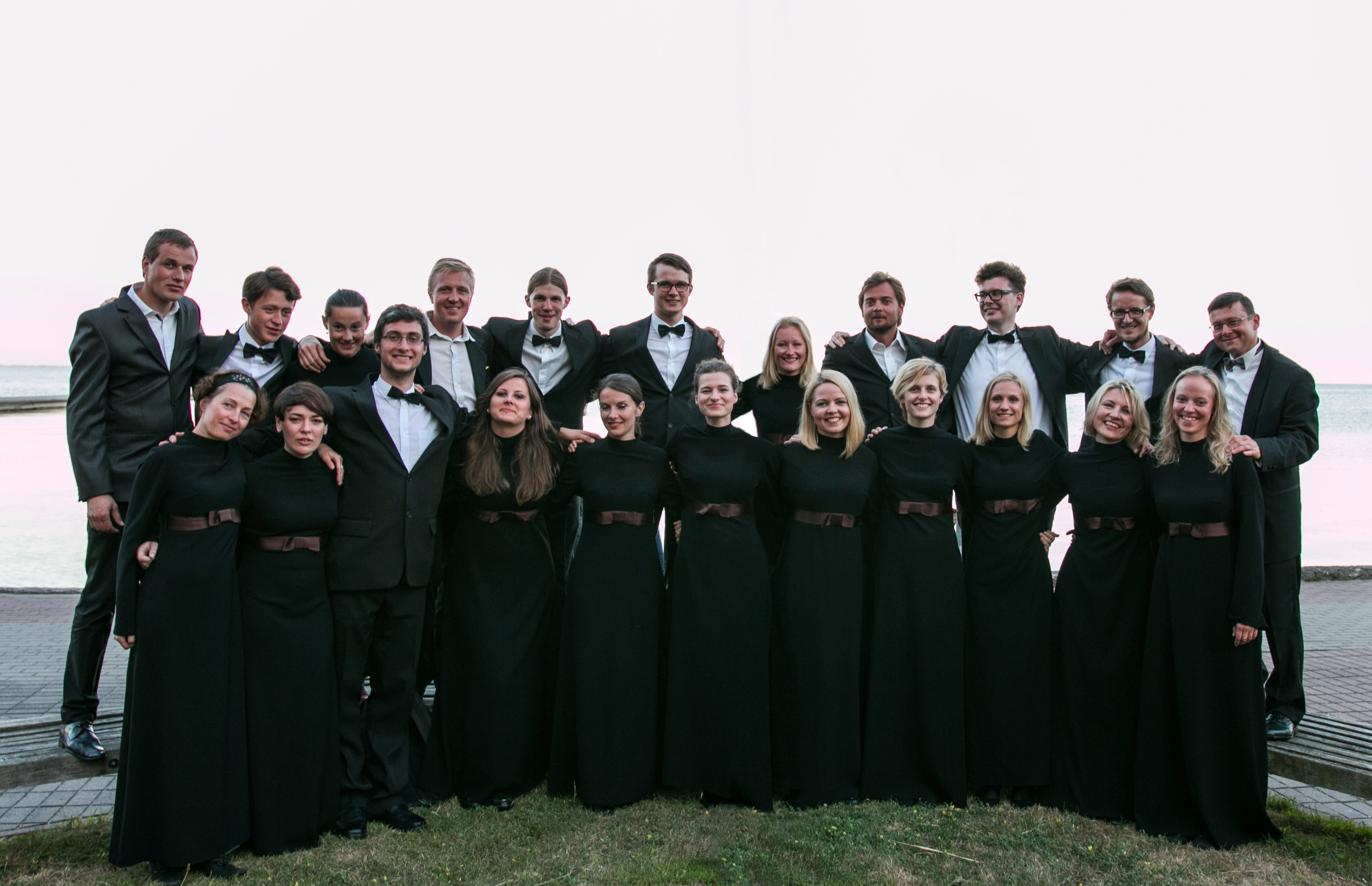 Aidija Chamber Choir. Photo: from the choir's archive
Although the Aidija chamber choir was founded 30 years ago, it remains youthful and energetic, consisting mainly of former and current students of the National M. K. Čiurlionis School of Art and students of the Lithuanian Academy of Music and Theatre. It is always the same yet different, subject to the laws of inevitable change, and that is why it doesn’t lose its vitality. However, the constant rotation of members of the youth groups is a major challenge that only strong leaders, capable of maintaining the creative fervour, can overcome. The stable axis around which Aidija choir has been revolving for three decades is Romualdas Gražinis (b. 1962).

According to musicologist Vytautė Markeliūnienė, the choir Aidija is distinguished not only by its youthful intensity and fresh creative spirit but also by its selected programmes and the unexpected interplay between details and the whole. Performative elements, rituality, extended ways of performing and the use of archaic instruments comprise another strong feature of Aidija, formed by a long-standing authentic connection with the music by the Lithuanian composer Bronius Kutavičius. Ritualistic, elemental, graphic oratorios by the composer of the ‘pagan avant-garde’ – The Last Pagan Rites (1978), From the Yotvingian Stone (1983) or The Magic Circle of Sanskrit (1990) – are deeply rooted in the repertoire of the ensemble and are actively performed both in Lithuania and abroad.

Back in 2001, the record label Ondine released a CD of the choir performing Bronius Kutavičius’ pieces entitled The Last Pagan Rites, which was rated with five stars by international experts. This year, the choir recorded the composer's oratorios again, this time for a vinyl record released by the Music Information Centre Lithuania – and with such fervour that even the great stones of the Baltic lands used in the performance which have long come to be seen as relics by performers were cracking. Thus, it can be said that this creative and personal connection with Kutavičius shaped some of the distinctive features of the choir.

“I met the composer Bronius Kutavičius around 1976 as a student at the M. K. Čiurlionis School of Art,” recalls the artistic director of Aidija. “At the time, he was working at the school and taught me score reading. It was from him that I experienced a slightly different ‘feeling’ of a lesson: it was not that important to ‘deliver,’ which was usual at the time, but rather to discover and understand. Later, while rehearsing Kutavičius’ works, I used to invite the composer to rehearsals, hoping for his advice on performing. However, he amazed me with a completely different view of the world, understanding of the situation and his compositional hearing. Initially, I even felt disappointed because I didn't get any tips from the artist... He kept wanting to hear if there was music in the piece he wrote. He kept saying: “Sing, sing, please! I want to hear if there is the music I imagined.” 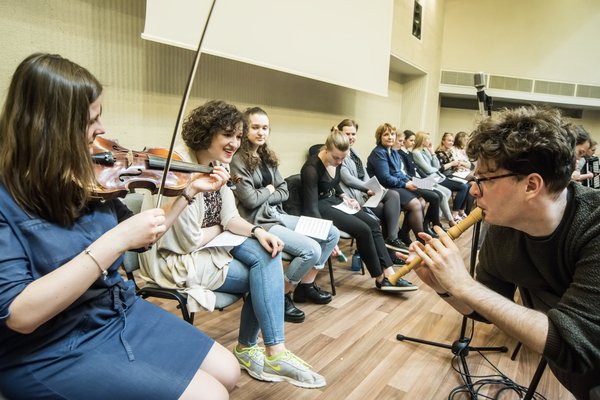 Aidija’s repertoire also includes the music of other Lithuanian composers. The choir was the first to perform large-scale scores by Onutė Narbutaitė, Algirdas Martinaitis and Osvaldas Balakauskas. It regularly presents fresh premieres at the Thomas Mann Music Festival in Nida. Aidija takes on the most diverse repertoire of professional Lithuanian music, from the works of the classic M. K. Čiurlionis to the creative puzzles of the most radical experimenter Rytis Mažulis. In general, Aidija’s repertoire is especially marked by variety, including works from all epochs of Western music history, from Gregorian chants to the 21st-century compositions. 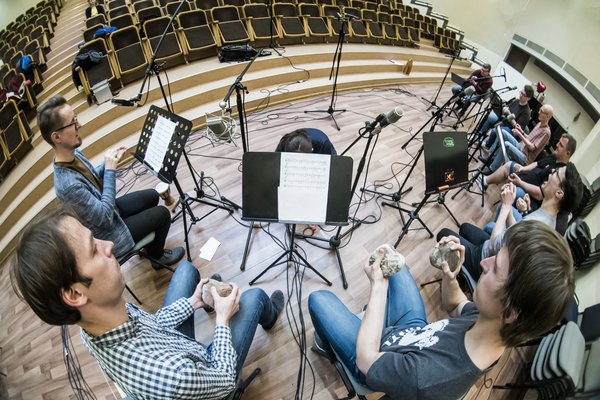 Aidija during the recordings of the oratorio "From the Yotvingian Stone" by Bronius Kutavičius. Photo: Dmitrij Matvejev
The chamber choirs Jauna Muzika and Aidija hold dozens of concerts of various genres and formats each year in Lithuania and abroad. They have performed in many European countries, as well as in China, and visited Japan and Israel several times. Nevertheless, on the international scene Jauna Muzika and Aidija were not yet able to establish themselves as strongly as other choirs from the Baltic countries. Vaclovas Augustinas comments on this situation by saying: “The Latvian Radio Choir and the Estonian Philharmonic Chamber Choir have a better-developed management, a more favourable local cultural environment, more talented leaders, directors and producers, a better infrastructure and an incomparably greater and more stable funding, which secures a more efficient singer selection and higher level of professionalism.”

Indeed, during the 30 years of Lithuanian independence, the professional growth of the Lithuanian choir community has been uneven: visible and progressing, yet in some places still inhibited, as if drowning in the abundance of the cultural field, and sometimes irregular, when something is only being done ‘from project to project.’ Therefore, the fact that Jauna Muzika and Aidija survived to this day in such a turbulent context of changing times is an exceptional phenomenon, especially having in mind that both choirs continue to seek new directions for development and operate with great vitality.

Translated from the Lithuanian by Julija Gulbinovič