In the year 2000, Vytautas Laurušas celebrated both his 70th birthday, and the golden jubilee of his manifold relationship with music - both as a composer, and as an important figure in the public musical life. He has also lately been experiencing a true creative resurgence: his music is in constant demand at contemporary music festivals, concerts, and portrait evenings, with both his latest works and new interpretations of earlier ones, being performed by superb Lithuanian and international musicians. Since the premiere at the Gaida Festival in 1999 of his Concento di corde for two violas (score released in 2002 by the Schott Publishers), Laurušas has been augmenting his output with reassuring regularity, averaging two works per year. The above-mentioned Concento di corde also became the focal point for the composer's first portrait CD, "Harmony of Strings", released in the autumn of 2002 by the Lithuanian Music Information and Publishing Centre, and presented in February of this year at a portrait concert at the Vilnius City Hall. The CD also includes three of his works written during 1979-2000: Concerto for voice and string quartet (1983), String Quartet No.1 (1979), and Symphony of Prayers (2000). The latter will be performed by Hellos Orchestra of Patras at the Athens Festival on May 28.

Laurušas' work is acquiring new impulses because the aesthetics of post-modernism puts it in quite a substantial context.
Donatas Katkus, Muzikos barai

Laurušas has not lacked creative energy even when various organizational concerns frequently restricted the time set aside for composing. For many years he has been director of the Lithuanian National Opera and Ballet Theatre, chairman of the Lithuanian Composers' Union, rector of the Lithuanian Academy of Music, and the present Chair of the Lithuanian Music Foundation. Despite the constant shortage of time, with many of his works, Laurušas managed to leave a deep imprint on Lithuanian music. Making his debut in the mid-sixties with the works written in the then obligatory style of "soviet romanticism" (such as the vocal cycle for tenor, Waves, which was much admired by Shostakovich at the time), he developed to become one of the first Lithuanian composers who tried keeping pace with the current music tendencies – dodecaphony, aleatory and sonorism. Among the most indicative pieces of Laurušas' early work are the poem for male choir Voices of the Night (1969), Sonata for Violin (1977), String Quartet No. 1 (1979), cantata The Night Is Aflame for soprano and string quartet.

With his very first pieces Laurušas defined himself as a composer of vocal music. Human voice and vocal expression has retained its pivotal role in Laurušas' work until this day. The composer has just completed a cycle of vocal miniatures entitled Seven Images for soprano, viola da gamba, and theorbo, set to the short poems by John Gracen Brown. Three parts of this work were performed for the first time at last year's Gaida Festival, by the Swedish Kairos Ensemble. Those laconic vocal pieces bring into focus two principal aspects of the late Laurušas' style. On the one hand, it is a certain precision of expression, particular 'histrionics' that is related to the poetic images of the text in a programmatic way. On the other hand, it is an utterly free, colour-based treatment of sound material within musical forms based on aleatory and/or serialism. "Confrontation of characters, thoughts, and colours has to be present in a dramatic structure. Of course, I am talking about music that is not strictly constructive. Pure constructivism is not my speciality… There has to be a bit of surprise sparking in a piece of music. To find that little diamond is the most difficult task", admits the composer.

The composer is currently coping with the new commission from "Gaida" festival – Concerto for cello and orchestra which is due to premiere in October. The solo part will be performed by distinguished Lithuanian-born cellist David Geringas, whose technical and expressive capabilities will be challenged right from the start of this one-movement composition. "I've transferred the traditional golden-section cadence of the soloist to the very beginning of this concerto. Following the wish of the performer, I've also provided a plenty of opportunities to show off his virtuoso abilities", says Laurušas of his yet unfinished work. 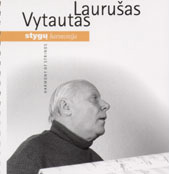