The number of diverse events of varying cultural and artistic significance is increasing within the sphere of Lithuanian experimental and electronic music. This is due, on the one hand, to the fact that the status of electronic music as a mode of serious art has solidified in the community. On the other hand, it is also directly related to the emergence of a body of new, well informed and educated creators, performers, organizers and listeners who are versed in the global musical culture.

Important phenomena reflecting these trends included the first "e-muzika" festival in Vilnius in April, and "Baltas triukšmas" ("White Noise") in Birštonas in August. Both festivals were attended by the majority of Lithuanian performers of contemporary electronic music. And both events revealed that the generation of sound explorers who have appeared in Lithuania during the last decade (Antanas Jasenka, Darius Čiuta, Raimundas Eimontas, Gintas K., Darius Gerulaitis, Algimantas Mielius, Rolandas Cikanavičius, etc), have a new group of successors. Young people who are naturally wired to the latest communication and electronic technologies - computers, advanced sound generating and processing programs, virtual space, etc. - are moving boldly towards electronic music. Among the young generation I'd include Vytautas V. Jurgutis, Artūras Bumšteinas, Skardas, and dj dr.x-ray - they encompass a very broad spectrum, style-wise, of electronic music: from industrial, minimal, and ambient music, to intellectual dj'ing.

The fact that collaboration between "high" and "low" - or to be more exact, "prestigious" and "non-prestigious" - art is on the rise in this country, is indicated by BBC 3 correspondent David Ellias, and ORF representative Susanna Niedermayr. After a comprehensive look at the electronic, experimental, and avant-garde music being created in various cities throughout the country, they produced a series of programs about Lithuania's avant-garde culture. 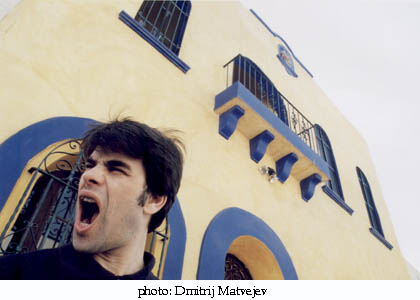 Worthy of special mention is the complex, diligent, always boldly experimenting composer Antanas Jasenka, whose full-length electroacoustic work, suggestively titled Deusexmachina, was released this year by Moscow-based Electroshock Records. The composer has been working for some time in the spheres of electroacoustic and noise music. "Deusexmachina", however, is the first of Antanas Jasenka's electroacoustic music CDs to be truly acknowledged by the international music media. It has been played as a whole, or in separate parts, by radio stations in Holland, USA, Croatia, Canada, Germany, Australia, and elsewhere.

Deusexmachina is a large, complex, multi-faceted work, whose controversial ambiguity is encoded in its very title... The antithesis of its meanings also lies in the symmetrical-oppositional sound construction, wherein the composer frequently combines totally contradictory textures: gentle elegiac piano tones and somnambulist whisperings are "bombarded" with sharp electronic noises... An ambient impassive tranquility is annihilated by expressive surrealist outbursts, while maniacal passions are tamed by the halters of an exalted prayer.
Raimundas Eimontas, Tango

In this work, Antanas Jasenka adapted his newly acquired knowledge of computer-aided composition, combining it with his own familiar electroacoustic, collage, and cut-off technique. But the composer does not limit himself only to electronic expression and the techniques that this mode offers. This autumn, two of his latest acoustic chamber compositions will be presented at two Lithuanian contemporary music festivals: Composition (2001) for string quintet and harpsichord, commissioned by and dedicated to the Kremerata Baltica Sextet, will be performed at the "Gaida" festival in Vilnius in October, and Hear, Hear (2002) for soprano and cello will premiere at the "Iš arti" festival in Kaunas. Though different in form, expression, structure, and inspiration, the works are connected by the same models of balance and symmetry: "It's a sort of motto of mine: to string everything together from start to finish, but to leave a niche for the deviations out of which creativity in fact is born."

The premiere of yet another of Antanas Jasenka's new works (performed by the Ex Tempore ensemble) is slated for December 18 at the Lithuanian National Philharmonic.