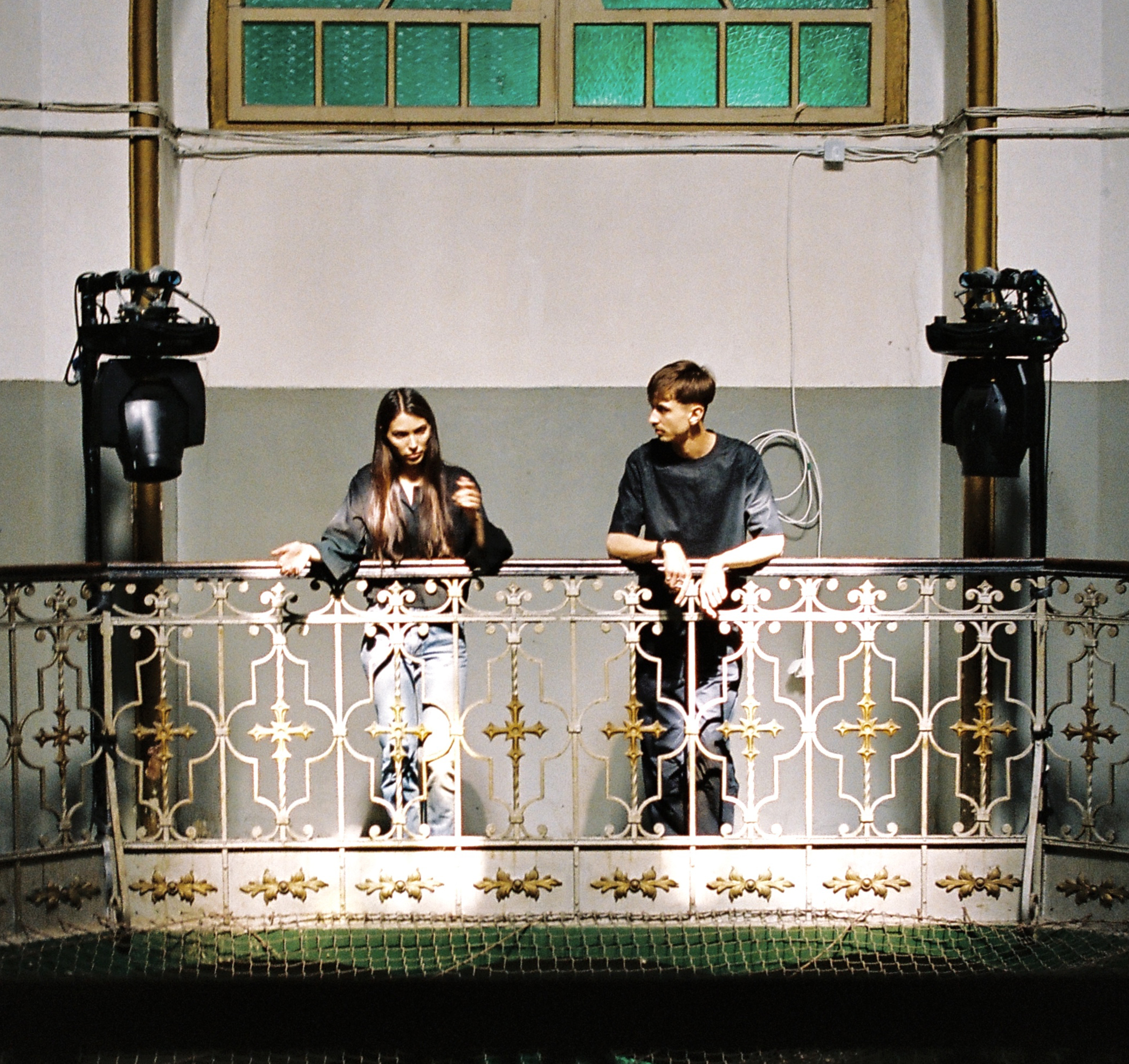 An experimental ensemble that reflects the state of modern culture—this is the Twenty Fingers Duo. It is a duo of a sister and a brother, violinist Lora Kmieliauskaitė and cellist Arnas Kmieliauskas. Although still very young in terms of both their age and the duration of their collaboration, they have already performed over fifty works by Lithuanian and foreign composers, released their debut album, and caught the eye of the international community.

Like many other members of the contemporary art community, the duo settled in the premises of the former Lukiškės prison, which today has become a real art incubator, operating 24 hours a day and aspiring to become one of the most interesting locations in the cultural landscape of Vilnius. For these reasons, I am not at all afraid to call the Twenty Fingers Duo one of the most striking phenomena on the Lithuanian contemporary music scene.

The performers stand out not only for their musical performances and interpretations but, above all, for their attitude, their behaviour on and off the stage, the principles behind how they promote their work, and the authenticity of their creative process. They have a modern attitude towards the world, themselves, and music, refusing to remain in an academically framed, isolated field of activity. Instead, they boldly open the door to wider society not by adapting to its conditions but by introducing inclusive ideas, high quality, and an openly declared need to experiment—all of this is characteristic of this ensemble, which does not lack enthusiasm and creativity.

A distinctive feature of the Twenty Fingers Duo is their sibling bond, which Lora and Arnas always like to emphasise. Their familial relation, like their similar path of professional development and their parallel cultivation of love for contemporary music, manifests at almost every stage of the ensemble’s creative work—from rehearsals, when, as they admit, they can openly tell each other anything, to stage performances, where their intimacy can be seen as well as heard. One of the clearest examples of this intimacy that I myself have noticed many times is their tendency to play facing each other rather than the audience. 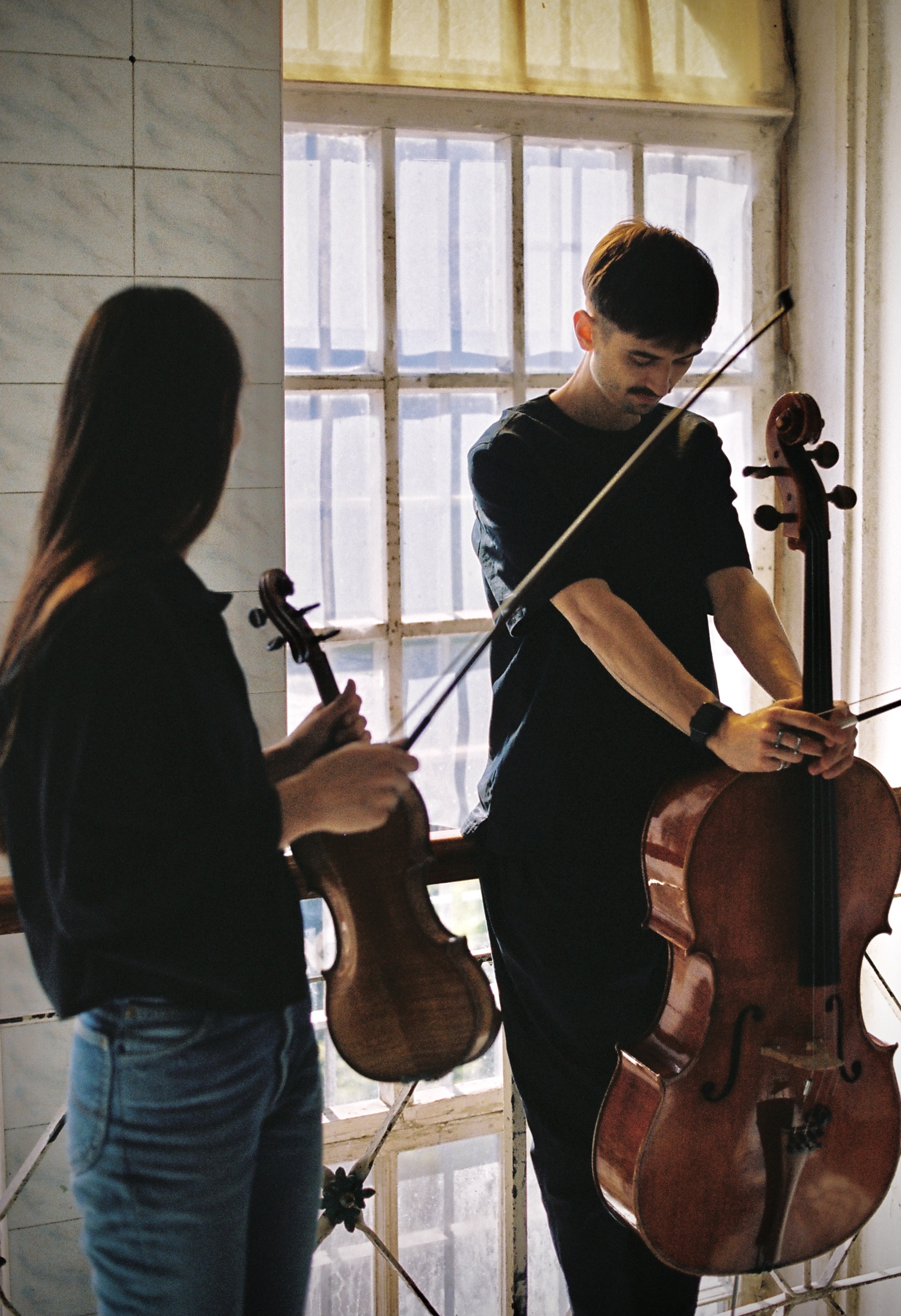 In fact, this ensemble attracts attention before playing a single note, because, either consciously or subconsciously, Lora and Arnas have created their own visual as well as sonic identity. They wear strictly black clothing on stage (I have never seen this duo dressed differently on stage), favour dark colours in the scenery, and stick to sharp, intense, and electrified movements: recurring elements in their concerts that create an additional visual narrative.

In their live performances, the Twenty Fingers Duo creates a unique space around themselves, a mental bubble that bursts on the last note of the programme. As the Estonian composer Aleksandr Žedeljov has interestingly observed, and in doing so quite inadvertently defined the form of the ensemble’s work, the violin and cello, Lora and Arnas, are like two strands of DNA connected by a continuous force, running in parallel, but very different. There is a high-voltage energy between these two circuits that permeates not only works such as Aukštetas by Rūta Vitkauskaitė, which trains the ears to high tones, but also different profile compositions filled with long tones or the spirit of melancholy.

I have had a chance to talk to Lora and Arnas in different contexts, and each time they kept reminding me that they were particularly interested in work that went beyond pure music. I could say that moving towards interdisciplinarity is one of the creative directions of the Twenty Fingers Duo. The ensemble’s most frequent collaborators are visual artists, with whom they look for points of contact between sound and visuals, enriching the audio narrative with the visual and vice versa.

One of the most prominent works of the ensemble so far is the audiovisual project Performa, which exists in a state of constant change. As Lora and Arnas have said, it is ‘one visually intonated sound journey’ in which six works by Lithuanian composers, created specifically for the project, are interpreted visually—the compositions are accompanied by visual artworks, video projections, and specially designed scenery. Today, Performa operates in two formats—the programme is still shown on stage, and it became the debut album of the Twenty Fingers Duo at the end of last year (Music Information Centre Lithuania, 2020). It is interesting that, even in CD format, the ensemble did not give up the audio and video connection encoded in Performa—the visual aspects of the album were created by the artist, Lauryna Narkevičiūtė. This visual narrative directly complements the audio content of the album. The conceptual nature of the album has not gone unnoticed and has attracted a lot of interest not only in the field of contemporary academic music but also far beyond. The tracks from Performa have been successfully migrating, one by one or a few at a time, to other programmes prepared by the Twenty Fingers Duo.

The ensemble’s tendency to move towards interdisciplinarity is also reflected in the interaction of violin, cello, electronics, and video in my___is your___ created during the Druskininkai art residency in collaboration with the Polish composer Piotr Bednarczyk. This work combines acoustic instruments, electronics, and visual material, bringing together different types of art and exploring the expression and development of the self and the other in interesting ways. The central premise of the work is the influence of the other on the self, exploring how people can and do interact with each other. In Bednarczyk’s work, Lora and Arnas seem to invade and disturb each other’s audio and visual space, thus rethinking the very phenomenon of an impact on the other. 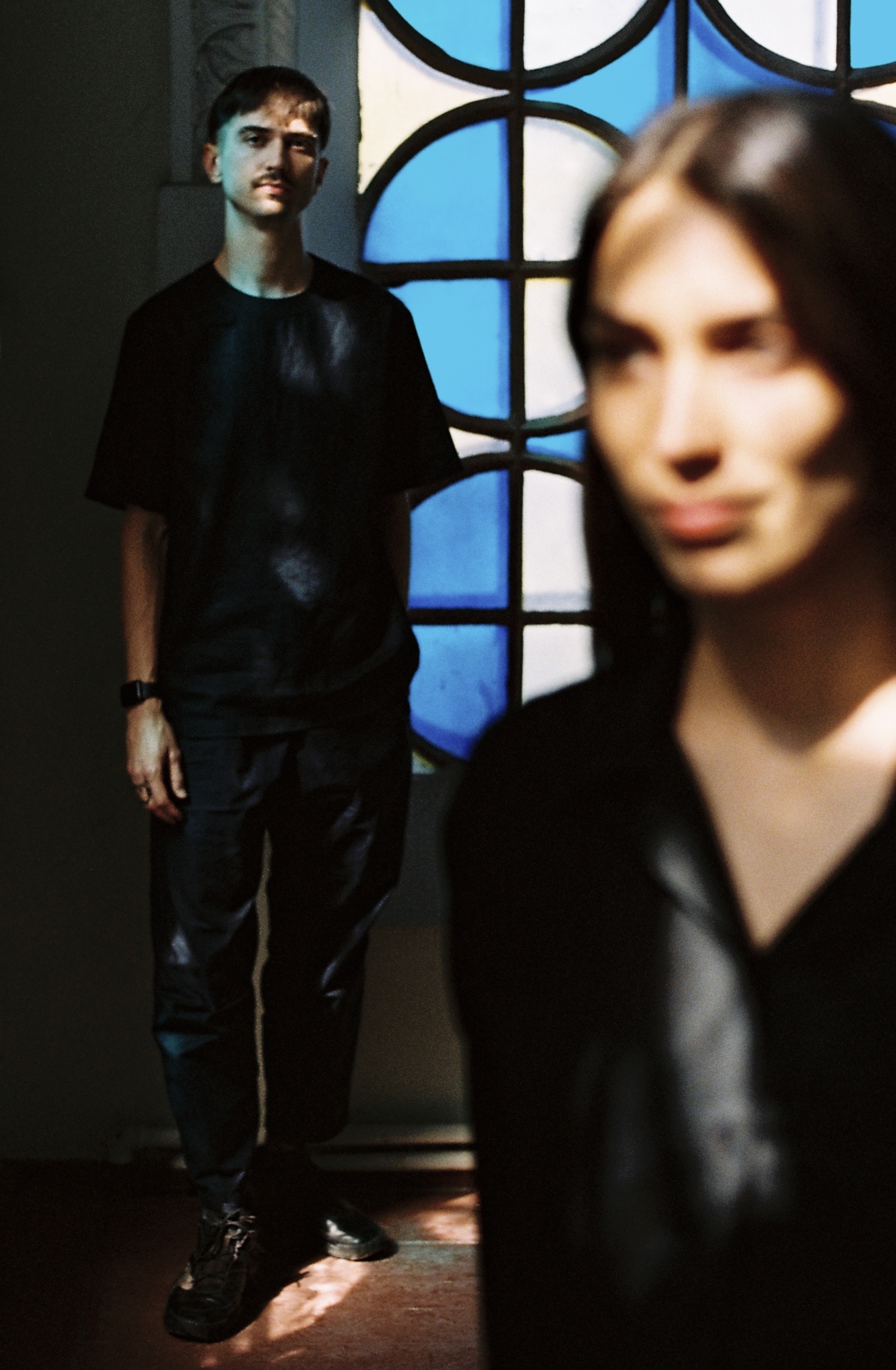 The Twenty Fingers Duo has taken on a different project in collaboration with designer Morta Nakaitė and composer Dominykas Digimas: to create a soundtrack for the nostalgic collection Blue, which explores post-apocalyptic aesthetics. Blue was inspired by a specific interest in the phenomenon of collective gardens that were common in Soviet times. This phenomenon is gradually fading from the memory of people today, but, surrounded by an atmosphere of light nostalgia, it has been reborn in the form of conceptual design accompanied by a unique soundscape. Undoubtedly, the involvement of the Twenty Fingers Duo in the creative process of this designer is not entirely accidental—Nakaitė is well acquainted with the field of contemporary art and has created many costumes for performances, films and various interdisciplinary projects.

Going back to the musical choices of the Twenty Fingers Duo, although they look at music very broadly and do not adhere to one specific style, a large part of their repertoire consists of works by young, approximately 30- to 40-year-old, composers. The duo often performs the works of Rūta Vitkauskaitė, Mykolas Natalevičius, Dominykas Digimas, Julius Aglinskas, Rita Mačiliūnaitė, and other creators of that generation. From the older generation of composers, the ensemble’s repertoire includes Dialogues by the late Anatolijus Šenderovas. His music became a sort of link between what they performed as ‘new music’ while still studying at the Lithuanian Academy of Music and Theatre and the experimental works that now make up the majority of the Twenty Fingers Duo repertoire.

Certain repertoire inclinations of the duo might have been determined by their declared desire for consistent participation in the creative process. This process-oriented view and the integration of performers into the creative process is characteristic of the younger generation in the field of Lithuanian contemporary music. Lora and Arnas have repeatedly mentioned that, for them, participation in the initial development of a project is one of the most important elements of their creative activity as a duo. Performers like to follow the process, observe it, participate in it, and discuss it, rather than being left alone with the composer’s score. Their intimacy with the development of a piece and close communication with the creators puts them in a unique position as performers, which enables them to become deeply immersed in every new piece. Likewise, Lora and Arnas’ repertoire choices suggest a sense of detachment from academia and a commitment to experimentation, rejecting the framing of music into styles or genres, leaving only the pure sound and the ideas it encodes as its main driving force.

The Twenty Fingers Duo retain this diversity of musical views by actively participating in other ensembles or playing in orchestras. The majority of these performances are not focused on new music. Until recently, Lora could be heard playing in the St. Christopher Chamber Orchestra, and she also creates solo programmes. Arnas plays in the contemporary music ensemble Synaesthesis; he is a member of the cello section of the Lithuanian State Symphony Orchestra and recently founded the cello ensemble Cello Club with his colleagues. Together as the Twenty Fingers Duo, Lora and Arnas collaborated on the recording of Rita Mačiliūnaitė’s opera NO AI DI and, in my opinion, one of the most interesting recent releases, electronic music composer Fume’s neoclassical album Data Sapiens. It is clear that the Twenty Fingers Duo is in great demand today not only because of their energy and enthusiasm but also because of the reports of their mastery spread by their collaborators.

Expressive and open, and rejecting an elitist approach to contemporary music, artists like these are as necessary as air in today’s musical culture. Such is the Twenty Fingers Duo. At the moment, the energetic buzz on the contemporary music scene is really noticeable in Lithuania, where the talented sister and brother are making waves in an interesting, stylish, and professional way.