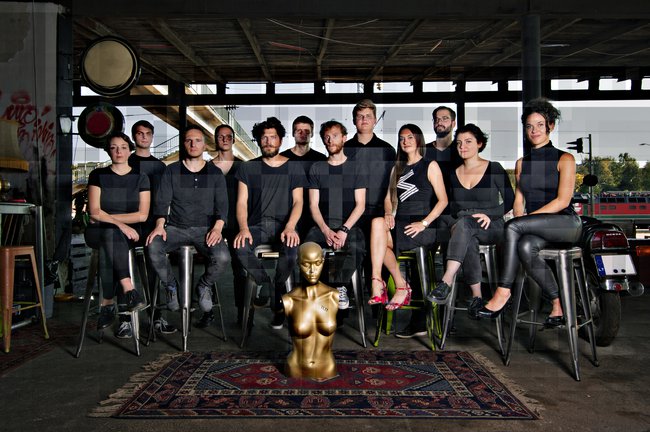 Contemporary Music Ensemble Synaesthesis. Photo: Tomas Terekas
The need for specialized ensembles performing exclusively contemporary music arose particularly in the 1960s when a musical language grounded in new means of expression began to spread extensively. The Melos Ensemble founded in London in 1950 still had a lot of classical works in its repertoire, as did the Nash Ensemble also founded in the same city in 1964, but later a number of ensembles slowly began to move away from classical compositions and even those from the first half of the 20th century. It was then that well-known collectives still active to this day were founded like the French ensemble Ars nova (established in 1963), the University of Chicago Contemporary Chamber Players (1964), the Asko ensemble in Amsterdam (1965), the Pierrot Players in London (1965), and the London Sinfonietta, a chamber music orchestra (1968). Later there was a constant increase in similar ensembles, usually marked by various non-traditional formations, so they themselves began to inspire the composition of new work specially for them to reflect their makeup. Some of the formations were the size of a chamber orchestra, including instruments from all the groups, in such a way that they could be divided into smaller ensembles and as a result more easily build up a more varied repertoire. In some cases, these were ensembles with a traditional makeup, like, for example, string quartets specializing in contemporary music (Arditti, Kronos, in Lithuania – the Chordos quartet, for example), in other cases, they were very specific, like Les Percussions de Strasbourg, established in 1962, playing only percussion instruments. It is true that some ensembles, in particular vocal ones, like the Hilliard Ensemble (active 1974–2014) or the Theatre of Voices, formed by the same founder Paul Hillier in 1990, specialize in two areas – the performance of old and new music, whereas other contemporary music ensembles increasingly limit themselves to the performance of one particular style of music. 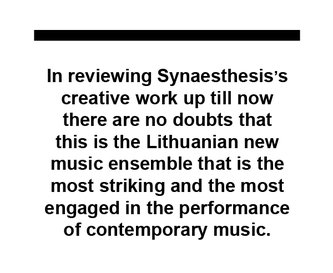 In this active international context, the Lithuanians were not pioneers, but the need to dedicate themselves to perform the newest music, not infrequently specially created, came into existence quite a long time ago. Over the last several decades there have been several similar specialized ensembles. Their main feature and difference from contemporary music ensembles in other countries was the fact that they were created with the purpose of performing most often exclusively the newest music by Lithuanian composers at the time and, practically speaking, didn’t play work by composers from other countries or, when they did, those were only isolated, exceptional cases.

The contemporary music ensemble of the Lithuanian Composers’ Union was founded through the initiative of its leader the cellist Iminas Kučinskas in 1975. During the period of its existence it has premiered about 120 compositions by Lithuanian composers. The ensemble’s sound was most clearly reflected by Kučinskas’s electric cello with the modifications made to its sound, at that time sounding especially new and attractive to composers, while the make-up of the ensemble although not large was quite flexible.

The Vilnius New Music Ensemble, with the composer Šarūnas Nakas as its leader and conductor, was active between 1982–2000. Initially the ensemble specialized in Bronius Kutavičius’s vocal-instrumental compositions to be performed by groups with a non-traditional instrumentation, it later expanded its repertoire with work by other Lithuanian composers. After independence, the ensemble often presented Lithuanian contemporary music abroad. 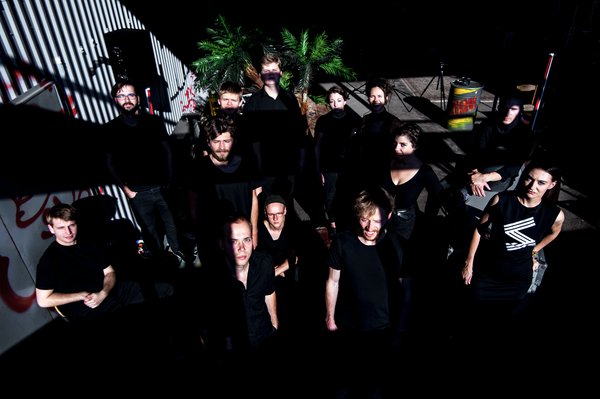 The Lithuanian Ensemble Network established under the initiative of the composer and conductor Vykintas Baltakas and already active for 10 years brings together practically all the Lithuanian ensembles and soloists performing contemporary music. Those participating in the network are the string quartet Chordos, the piano trio Kaskados, the St Christopher Woodwind Quintet, individual performers of new music, as well as the youngest group – the ensemble Synaesthesis. 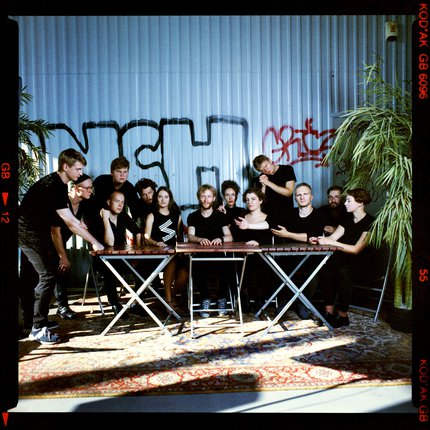 Photo: Tomas Terekas
The contemporary music ensemble Synaesthesis was founded in 2013 by the conductor Karolis Variakojis and the composer Dominykas Digimas. The ensemble initially brought together people that had studied at the M. K. Čiurlionis School of Art and was later supplemented by new members that had studied or were still studying in Lithuania and abroad. Synaesthesis from the very beginning was oriented to performing mostly the very newest creative work composed already in the 21st century by composers from various countries. First and foremost, the ensemble chose to perform the work of its friends, that is, the young composers Dominykas Digimas and Andrius Arutiunian. Shortly thereafter they included the music of their former professors Yannis Kyriakides and Rytis Mažulis, and later the works of other young composers.

From the very first concerts it became clear that it was important for the ensemble as to where and how they played, and for this reason they looked for non-traditional spaces, making use of light, movement, video projections and other means, by now commonplace in contemporary music concerts. The ensemble’s spiritus movens Karolis Variakojis managed not only to bring together performers dedicated to performing contemporary music but also to inspire them so that the ensemble’s energy during concerts seems to be boundless. This enthusiasm, with which the ensemble works and gives its concerts, is not diminishing – on the contrary, both its programmes and its performances at every concert are only moving in an upward trajectory, ever more complex and stylistically diverse contemporary music compositions – occasionally even classics from the second half of the 20th century – are being included in its programmes.

It’s clear that compositions of such a diverse style and musical language like, for example, Terry Riley’s In C or Gérard Grisey’s Vortex Temporum I, II, III, need a completely different interpretive experience. Since the ensemble is still growing and maturing, these kinds of challenges only serve to toughen up the young musicians and expand their opportunities. Bearing in mind the increasing specialization of the above-mentioned contemporary music ensembles, it would seem that a more targeted positioning of themselves in the new music marketplace might be more beneficial. Although that may narrow the opportunities for performances, it would undoubtedly bring in more audiences who like a specific aesthetics. On the other hand, at work here is the syndrome of a small market, and as much as possible being done in a wide-ranging manner is how the collective can survive from the sort of activities they’re engaged in. It doesn’t seem that the broad range of styles has given rise to any problems for Synaesthesis but perhaps the members of the collective themselves will want to form their own specific face more clearly. 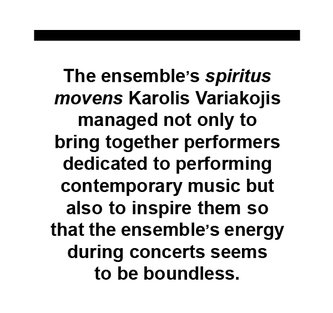 The strongest and most interesting programmes prepared by Synaesthesis up till now can certainly be called conceptual: they were well thought through both as regards the choice of the pieces, their totality, and the venue chosen for said performance. There are few coincidences here, everything being determined by the totality of the concert, into which seemingly not always easily compatible compositions were sometimes introduced. Lights and even some minimal theatrical direction are employed without the appearance of chance playing any part in the way the compositions work together leading us to the conclusion that the programme was conceived in that particular way. The conceptual nature of the programmes and the refusal to take part in occasional appearances are among the ensemble’s strongest qualities. On the other hand, as a young collective which takes part in various master classes, seminars, festival programmes, and having not quite yet formed a strong image or made a name for itself, it often has to submit to the wishes of organizers or perform compositions which they would not otherwise include in its own programmes. Nor does the ensemble reject the obligation of performing more compositions by its contemporaries, often without paying attention to their artistic effect or even their professionalism. But those are the problems of every beginning collective. In this and similar cases Karolis Variakojis’s comments add a great deal to the atmosphere of a concert, comments that are always very direct, spontaneous, as if improvised, creating a feeling of intimacy and commonality between the ensemble and its audience.

In its debut music album, commissioned by Music Information Centre Lithuania, Synaesthesis chose work mostly composed after 2000 by Lithuanian composers of different generations. The programme featuring pieces by the above-mentioned composers Dominykas Digimas, Andrius Arutiunian and Rytis Mažulis, as well as Julius Aglinskas, Rita Mačiliūnaitė, Ramūnas Motiekaitis and Ričardas Kabelis, reflects a part of the more striking tendencies of the last quarter of a century in Lithuanian music. It’s hard to say though how well an audio format can present Synaesthesis in these visual times because it seems to me that without experiencing them in concert the picture we have of it would remain far from complete. 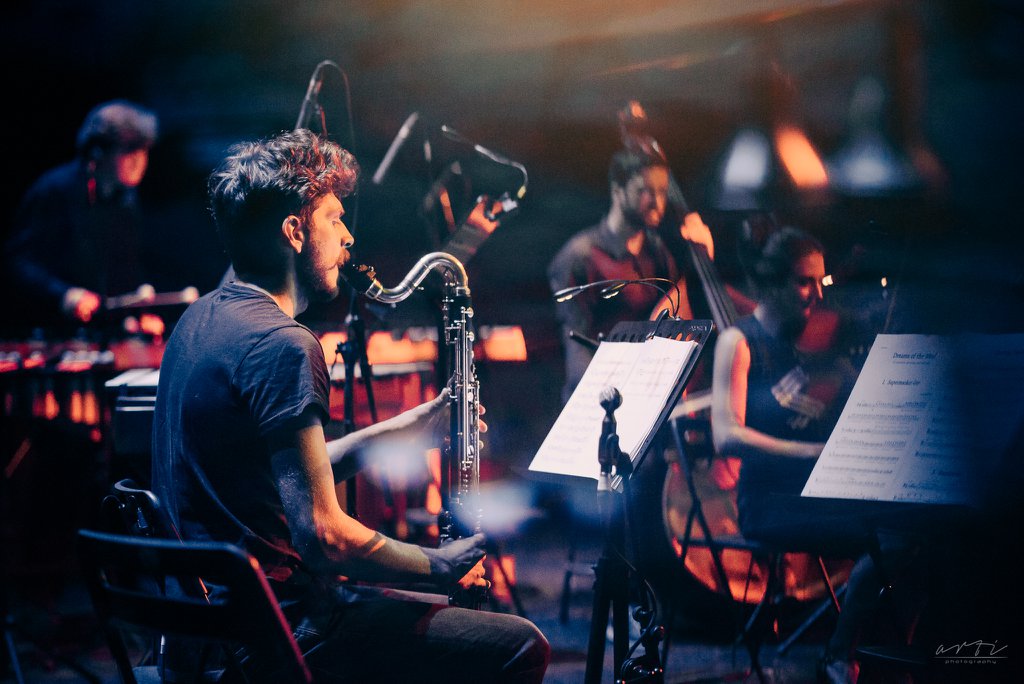 Up till now the ensemble has presented itself in the most diverse way possible with programmes commissioned by two Gaida festivals, namely Cool People Playing Strange Music and Strange People Playing Cool Music in 2017, as well as In Celsius and In Fahrenheit in 2018, where compositions by European and American composers were presented. David Lang’s composition Cheating, Lying, Stealing performed by them in one of these concerts in 2017 was, perhaps, the most driving and energetic I’ve ever heard. 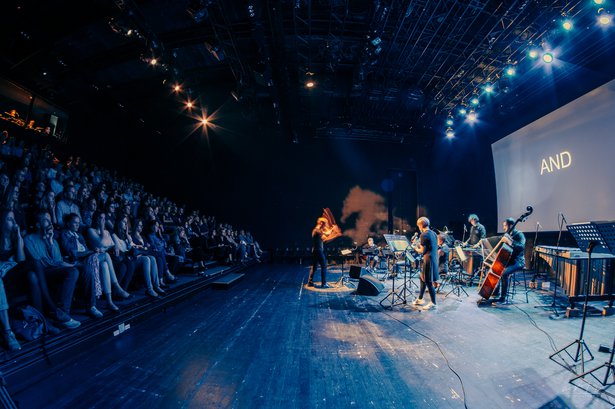 A concert of the Contemporary Music Ensemble Synaesthesis at the Arts Printing House in 2018. Photos: Artūras Arti
In reviewing Synaesthesis’s creative work up till now there are no doubts that this is the Lithuanian new music ensemble that is the most striking and the most engaged in the performance of contemporary music. Over the five years of its existence the collective has already attracted attention not just in Lithuania but also abroad. In 2016 and 2017 improving their skills at the international summer academy in Austria the group won the Just Composed category for the best performance and interpretation of a newly composed work. In 2017 the Lithuanian Ministry of Culture awarded it the Young Creator prize, and in 2018 Synaesthesis became the Lithuanian Composers’ Union’s ensemble in residency.

However, in the future not only the question of choosing a repertoire will undoubtedly arise for Synaesthesis but also that of survival. The present ardour of the ensemble’s members may not be enough to help the ensemble survive, if it isn’t regularly and appropriately supported by the Lithuanian institutions funding culture and the arts – just contemporary music festivals and the odd concert will certainly not be enough. It is to be hoped that Synaesthesis’s dedication, achievements and endeavours in playing contemporary music will be adequately recognized by the relevant institutions and that its work doesn’t remain just a pastime driven by enthusiasm. Moreover, Synaesthesis has already shown that the newest music can be not just strange but also cool.