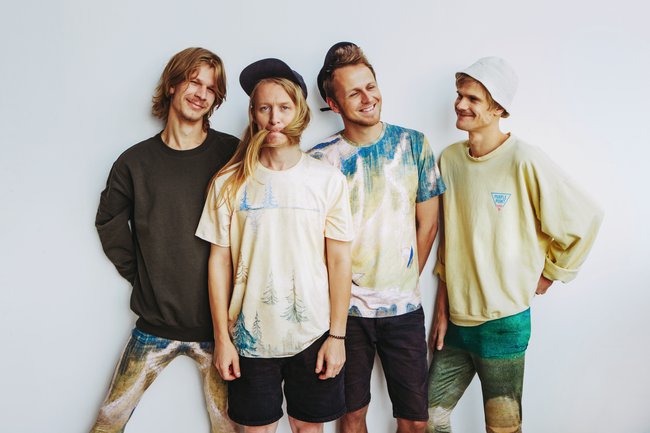 Garbanotas. Photo: Artiom Ponkratenko
I can say exactly when I first found out about the existence of the band Garbanotas Bosistas (the Lithuanian name means ‘curly-headed bassist’) and heard it performing live at the same time. That was on 1 December 2011 – as it happens, during the day and not in the evening. And not in some Vilnius club fashionable at the time but in the dance hall of the M. K. Čiurlionis School of Art, into which over 300 first-time participants at a TEDxVilnius event had gathered. Garbanotas Bosistas was the focal point for the Vilnius Temperature series of video clips matched to the weather. The temperature of the audience if not of the hall rose by several degrees. Regardless of whether you listen to music at all, what sort you like, what sort you take an interest in – the curly-headed performers have always gone for the feelings and still do.

‘The music, it’s beautiful! Good for a trip, with hair hanging loose, jeans frayed – as if being out of a 21st century context full of hashtags. In this case it’s only an advantage. For some the psychedelic stories of Garbanotas Bosistas remind of Tame Impala, for me perhaps it’s more DJ Harvey, but only because it was his album that I listened to a lot and frequently over the last season,’ I wrote three and a half years later, when the first blossoms of May 2015 decorated the capital’s pavements, and the group released their album Above Us. It was a Wednesday evening and it wasn’t even the first time that the people of Vilnius packed in a concert hall quite big one even for a capital city. By the way, the psychedelic Australians Tame Impala have always been the ones mentioned first, when talking about foreign equivalents and those who might serve as an inspiration to Garbanotas Bosistas, that is, if you listen to that kind of music at all. I didn’t listen to it. I know that I was one of the group’s fans and not the only one. 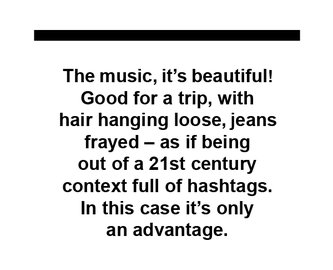 Quite recently, mulling over of how to present this Lithuanian phenomenon to those who don’t understand how much, for example, the phrase ‘Come back from far away’ means to us, I decided to write to Gabrielė Tamutytė, a former member of Garbanotas Bosistas, who later became their manager and even set up her own agency Tilto namai (Bridge House) promoting music which she feels close to. ‘Would you agree with the statement that the group began a new tradition in the Lithuanian music business – a real honest sound without a single scandal, without any publicity about the private lives of its members?’

‘What’s set out here is true but as to whether it’s a new tradition – that’s hard to say,’ said Gabrielė modestly, who as the group’s manager undoubtedly contributed to the fact that the musicians (who at some time in the past had played with a Christian music band and that’s a very interesting piece of information when reflecting on the message of peace they promote) have never been the object of sharp criticism even from music critics who aren’t at all careful about the words they choose. The only exception perhaps being… their name. Yes, even in Lithuania not everyone manages to write it correctly, never mind when they’re touring abroad, when the letters in incomprehensible words get twisted up like flowers in one’s hair. Perhaps that’s why the group is now called just Garbanotas (yes, that’s an autumn 2018 announcement). 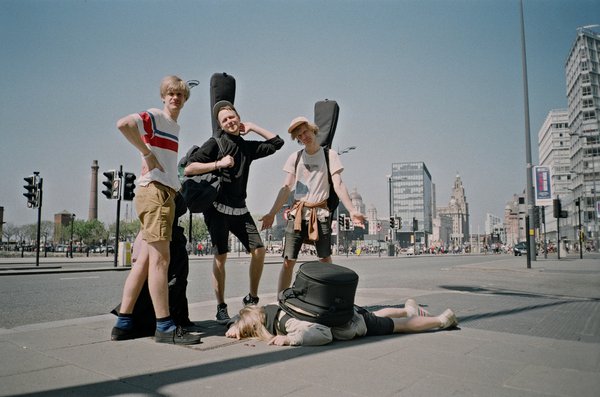 Garbanotas in Liverpool. Photo: Gabrielė Tamutytė
The musicians didn’t comment on the change of name but allowed me to interpret it for myself. I’ll be able to finally make sure only at the end of the year, when the group’s album comes out only in Lithuanian (that’s courageous!) and it will be possible to measure how much bass there is in it. But it’s high time. Have you noticed that ‘Oh, My Brother’ and the songs from the group’s first EP can no longer be heard in their concerts? Nor do their audience ask for them as they grow with the musicians. Even though the vinyl record Room For You is what those who use English call ‘timeless’. I think it’s meaningful that this album in particular and not Above Us is on timeless vinyl.

A little before I put the word ‘courageous’ in brackets since over the last several years, besides the fact they are the darlings of all those who have ever seen them in Lithuania, the musicians are regularly touring abroad. By the way, I personally made the acquaintance of Gabrielė in Estonia when both of us participated in Tallinn Music Week, the strongest event in the Baltic countries in terms of international relations, and this fact explains why some bands tour abroad while others remain jealous. 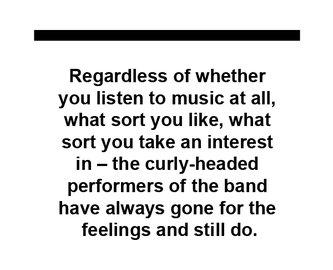 Gabrielė, although again a little too modestly, says that concerts abroad – 13 countries at last count – also add to their popularity in Lithuania: ‘The doors in Lithuania opened up from the time of their first concerts in Great Britain when we had the opportunity to take part in the showcase type festivals The Great Escape and Liverpool Sound City while the opportunities abroad are just opening up – thanks to, for example, the international project Europavox, of which exchange programme Garbanotas became a part this summer.’ Membership in the Europavox network will give the group the opportunity to take part in six events similar to Loftas Fest (also a member of one of Europavox platforms) in Europe over the next year and a half.

Garbanotas goes back to the places abroad they’re already familiar with less frequently but they certainly already have fans in neighbouring countries, confirms the group’s manager: ‘Latvians came to the launch of the album and a group of like-minded people from Latvia has come to the Tilto namai festival organized by us for the second year running. That event, by the way, also brings in an audience of all hairstyles – that is to say, all those who listen to Garbanotas and members of its extended family. And those are Parranda Polar, Sheep Got Waxed, Kabloonak, and others. In this connection I remember the view expressed in the weekly Literatūra ir menas (with which I completely disagree) that Garbanotas has created a peculiar alternative music mafia network – that is to say, they play at each other’s concerts, they support one another and so block the way for new talents. Friendship and peace, the features of this musical family, can be heard not just in the sounds but in how they socialize and how they’re open to opportunities. 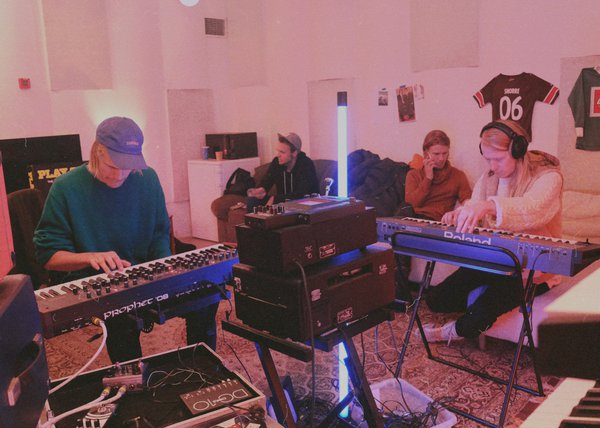 Garbanotas at their studio in Vilnius. Photo: Justė Urbonavičiūtė
‘If there’s time to stay on in a town after a concert, whether it’s at a local bar or over a long breakfast – the group always acquires new friends. Garbanotas likes to socialize, doesn’t shut off its audience, that’s important to them, so, as far as I can see looking on from the sidelines, a connection is made very frequently,’ Gabrielė said, sharing her impressions on their trips abroad where musical seeds are sown in the shape of the albums they sell.

‘Flowers are coming out of the loudspeakers’ is already a very old compliment paid to the music of Garbanotas. It doesn’t matter what language the songs sung by the group is in – Lithuanian, English or that of the birds. Flowers are an expression of universal beauty. Determined, unpretentious and sometimes stunning at the very moment when a bud becomes a blossom. It’s not very often that you can speak about a band in botanical terms.