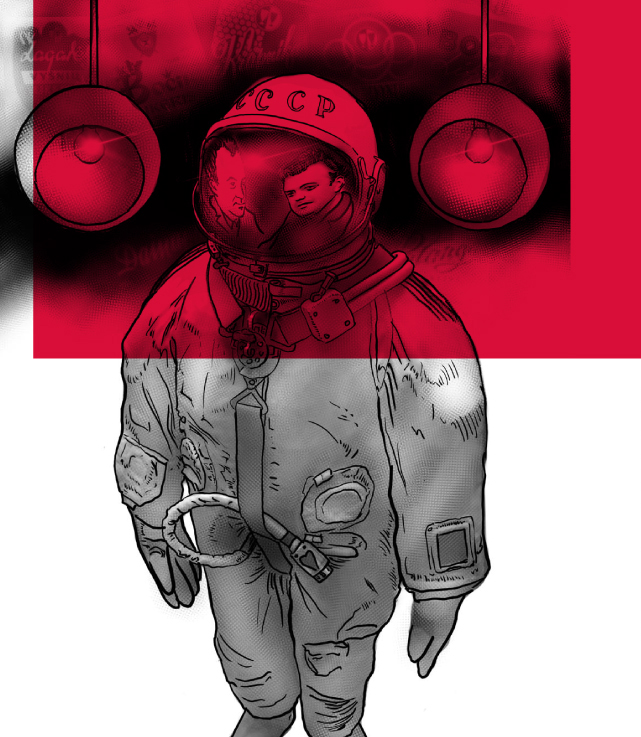 Illustration by Liudas Parulskis
During the Cold War and the Space Race, a supplementary social programme in accordance with the values of the Communist regime was implemented in the USSR. Gherman Titov, the Soviet cosmonaut who was the second human to orbit the Earth, visited Lithuania in the 1960s and included in his official itinerary a meeting with representatives of the Composers’ Union of the Lithuanian SSR. The post-modern essayist Herkus Kunčius, called a scandalous and provocative Lithuanian writer by critics of a sensitive nature, writes here about this historic episode.[1]

Since ancient times composers and cosmonauts have been linked by a strong friendship between. After the first successful flights of the space dogs Belka and Strelka, composers would wait impatiently for cosmonauts to return to Earth. They would not return empty handed. Some would secretly bring back cosmic dust, others – noises that up to that time had not yet been heard, while the composers, in order for their friends in Outer Space not to be so sad, would present them, before they went, with several garlands of songs so that the cosmonauts in their weightless state would have something to hum.

Meeting on Earth, the Soviet composers and cosmonauts would happily spend time together. While chatting informally, time would disappear, space would also hide somewhere, with the conversations ranging over a very diverse range of topics: is there life in Outer Space; how could a rational mind comprehend that; did they come across representatives of civilizations not from the Earth; will the end of world come and, of course, how does the Soviet Motherland look from Space?

The Soviet cosmonauts, inundated by questions, were happy to share their extra-terrestrial experiences and hid nothing from the composers. Courageous by nature and not afraid of the political consequences, they would always tell the truth and reveal secrets hidden from Soviet society. In this way the composers, unlike other engineers of the soul, would obtain knowledge of telekinesis, alchemy, numerology, telepathy, as well as other matters of an esoteric and spiritual nature, which they would be able to use later in their creative work and use to hypnotise the Soviet listener.

With the opening up of secret archives, today we can find out about some of the conversations from transcripts kept hidden over many years, recording the informal conversations of the composers, cosmonauts and the persons who accompanied them. 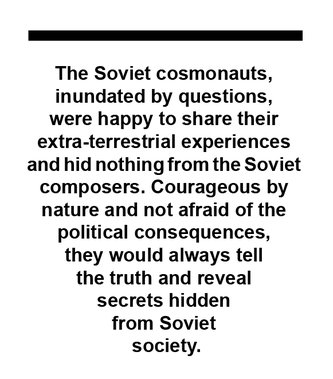 COMPOSER (pouring a generous portion of Dainava[2] to a Cosmonaut, some Palanga[3] to an Unidentified person, and only after that a symbolic amount of peppermint liqueur for himself). Say what you want, but it’s probably best on Earth?

UNINDENTIFIED PERSON (to a Cosmonaut). Do you take your party ticket with you when going into Space?

COSMONAUT (downing a glass of Dainava). Comrades... we have everything we need there.

COMPOSER (pouring out some Palanga). There’s no lack of anything in Space?

COSMONAUT (after quickly downing his drink). What?

COMPOSER (pouring out some more to drink). So where is it better for our people – here on Earth or in Outer Space?

COSMONAUT (finishing his glass of Palanga). Today, back again on Earth, I finally understood that there are five, no, three universes. They, alas, are empty. (The Composer, understanding what has to be done, is pouring everyone some Šaltrezas[4]. The Cosmonaut drinks it.) The form, if you look, is no different from emptiness, and the emptiness is not different from the form. What the form is is emptiness. What emptiness is is the form.

UNINDENTIFIED PERSON (before drinking some Šaltrezas). Do you mean to say that when you’re back on Earth, you can assign all of that to feelings, perceptions, inclinations and Soviet consciousness?

COSMONAUT (downing his glass of Dainava). Emptiness is everywhere. It’s marked. It neither shows itself nor does it disappear. It’s neither polluted nor pure, it neither increases in size nor decreases.

COMPOSER (filling a glass with Žagarės vyšnių[5]). That’s why perhaps in the emptiness of a universe there are no forms, no perceptions, no inclinations and no Soviet consciousness?

COSMONAUT (he delays drinking, mysteriously). When one gets there, there are no eyes, ears, noses, tongues or brains. There are no colours, sounds, smells, taste, no objects of touch or the brain. 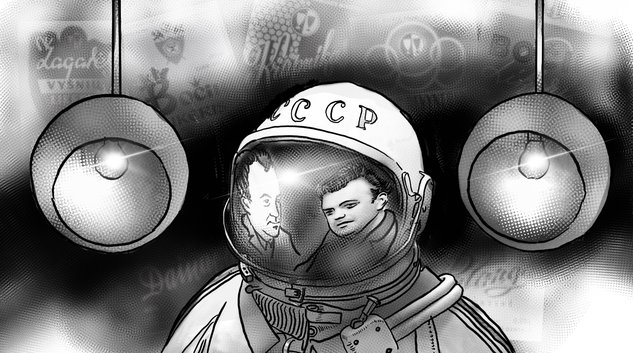 Illustration by Liudas Parulskis
COMPOSER (surprised). There are no eye sockets and nothing up to the limits of the conscious brain itself?

UNIDENTIFIED PERSON (horrified). There is no ignorance?

COSMONAUT (with a glance encouraging the Composer to pour out some as yet untouched Suktinis[6]). And so it is up to old age, death and its disappearance. (The Cosmonaut drinks several glasses of Suktinis by himself.)

COMPOSER (not daring to believe). There is no suffering, no source of suffering, no knowledge, no achievement and nothing that is achievable on Earth?

UNIDENTIFIED PERSON (stunned). Not even a party card?

COSMONAUT (like a prophet, he points to the empty glasses). The three universes free themselves of suffering and anxiety… (He drinks the Krupnikas[7] poured by the Composer.) Now the mind is free of any hindrances. And with no hindrances, there is no fear. There is nothing…

UNIDENTIFIED PERSON (whispers conspiratorially to the Composer). The Cosmonaut will soon be in nirvana…

UNIDENTIFIED PERSON (to the Composer). Composer, please be so kind as not to pour the Cosmonaut any more to drink.

COSMONAUT (rises from the table, solemnly). Sambodhi... Samyak... Anuttara... Know that the Prajna Paramita is our great transcendental mantra, the purest cosmic mantra, the all-surpassing mantra, the incomparable mantra of all universes, the eliminator of all suffering, like wisdom, like truth without error… (The Cosmonaut drinks from a bottle of Starka[9]. He gives the bottle to the Composer for him to also rinse his mouth.) Repeat, comrades, the Prajna Paramita mantra, repeat, comrades, the mantra: gate gate paragate parasamgate bodhi svaha...

COSMONAUT, COMPOSER and an UNIDENTIFIED PERSON (while rising high into Space):