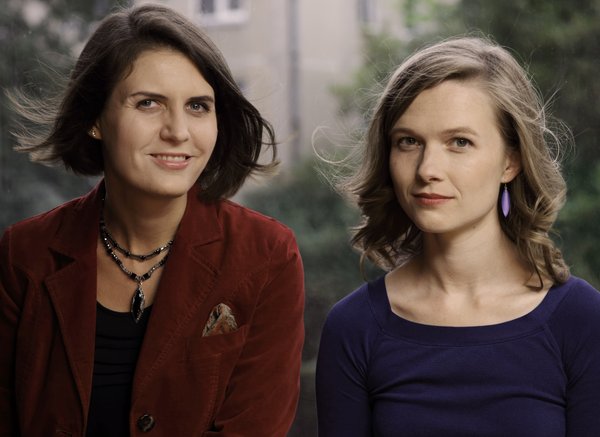 The composer Raminta Šerkšnytė and the conductor Mirga Gražinytė-Tyla. Photo: Modestas Ežerskis.
The young Lithuanian conductor Mirga Gražinytė-Tyla (b. 1986 in Vilnius), already a part of the world’s living classical music tradition, has taken on the role of a resolute strategist or cultural diplomat with the intention of strengthening the position of Lithuanian music abroad. ‘I very much look forward to the time when I can present the music of Osvaldas Balakauskas, Feliksas Bajoras, Onutė Narbutaitė, Algirdas Martinaitis, and Justė Janulytė in an international context (or expand upon what has already been done). That is a special privilege which is hard for a person from a large country to comprehend’, claims the conductor. Probably the strongest link she has at present is with the orchestral work of the composer Raminta Šerkšnytė, work which Mirga Gražinytė-Tyla has presented this year at three concerts in Detroit with the Detroit Symphony Orchestra, at the Lucerne Festival with the European Chamber Orchestra, at the Lincoln Centre in New York, conducting the Juilliard Orchestra at the opening of the concert season and at the Birmingham concert hall with the city’s symphony orchestra which she began to be in charge of as its music director from September this year.

Once on the podium, she becomes the sole leader of the flow of music, taking the whole orchestra with her. In the words of the San Diego Union-Tribune: ‘Mirga is no dictator on the podium. But her intentions are unmistakable. She leaves no question about what she wants and every move she makes is purpose driven. And that purpose is giving life to the music.’[1] That pulsating life which Mirga Gražinytė achieves is undoubtedly one of the factors leaving the audience in a state of euphoria after her conducting and making music critics to speak out in fiery metaphors, to quote, for example, the Los Angeles Times critic Mark Swed: ‘She didn’t so much begin these three pieces; she ignited them.’[2] After descriptions like this, one is even more fascinated by the fact that this seemingly strong and powerful Amazon reminds one more of a fairy who transmits all of her vital energy, suggestive gestures and creative mesmerising quality through light and graceful movements. 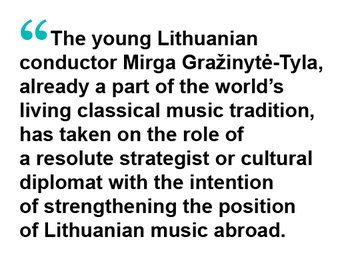 Garnering more and more international attention, Mirga Gražinytė has been active on the classical music scene abroad for more than a decade. Almost immediately after graduating from the National M. K. Čiurlionis School of Art, she went to study at the University of Music and Performing Arts in Graz. After completing her B.A. studies, she remained immersed in the German-Austrian tradition, going on to study conducting at the University of Music and Theatre “Felix Mendelssohn Bartholdy” Leipzig and the Music Conservatory in Zurich. The latter years have been for the conductor an unbroken chain of professional victories. The choir conducting competitions that she won during her student years provided a firm foundation. However, from 2011 Gražinytė’s career has been growing at an exponential rate. Her duties as Kapellmeister at the Theater Heidelberg and the Bern Opera, and then as music director of the Salzburg State Theatre were a springboard for her to reach new heights. And since September 2016 Gražinytė has been musical director of the City of Birmingham Symphony Orchestra, a position which, it is said, was offered to her after the very first rehearsal. She was appointed to these duties before her thirtieth birthday. For almost four decades the CBSO has been in the forefront of selecting young and dynamic talents to wield the baton.

Gražinytė is making a name for herself not just in Europe – America has also warmly welcomed her. She was a Gustavo Dudamel Fellow of the Los Angeles Philharmonic for the 2012–2013 season, named its assistant director in 2014, and associate director in 2015. It is not just these facts but also the response of music critics which speaks to the young conductor’s talent. For example, what is often emphasised is the charming aspect of Gražinytė’s manner – her vital energy, which has won over both the concertgoing public and the musicians: the latter, led confidently by the conductor, are inevitably inspired by her enthusiasm, which undoubtedly is also felt by audiences. This energy and enthusiasm have been described in the press as ‘a joyous natural musicality’ – and is not the heartfelt joy in her work, a part of her personality and welling up from inside of her, the key to her success? ‘Gražinytė-Tyla has a lively intelligence, a commanding technique and – most importantly – a joyous natural musicality that in the right conditions could more than fill the shoes of Nelsons, Oramo and Rattle. Any orchestra would be lucky to have her.’[3], affirms a reviewer for The Arts Desk. 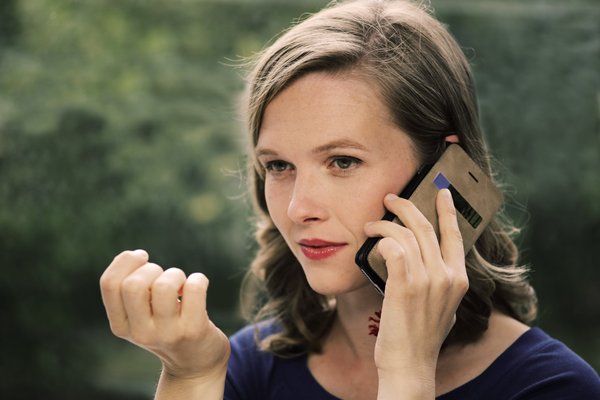 Mirga Gražinytė-Tyla. Photo: Modestas Ežerskis.
In truth, more than one critic has emphasised not just her energy but also her intellect and technique – even though capable of enviable bursts of energy, Gražinytė combines that with rationality; in her lively but precise gestures one finds a balance between emotion and reason. Basically, that is what The San Diego Union-Tribune critic is talking about: ‘But the most remarkable thing about, and let’s just call her Mirga, is not necessarily her energy; it’s her rare combination of excitement, focus, precision and intellect. Add to that her podium presence and the fluidity of her approach, and you have a rare talent.’[4] 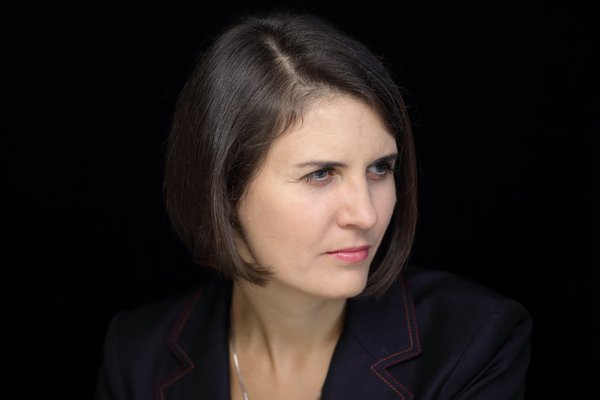 Raminta Šerkšnytė. Photo: Modestas Ežerskis.
Gražinytė’s name is not only making Lithuania better known: the conductor is an enthusiast for having music by her country’s composers performed; through her activities she disseminates information about their work and ‘airlifts’ it flying ‘above sea level’ to other lands. And these are not just one-off examples but, it would seem, an ever more consistent thread running through Gražinytė’s repertoire, strengthening her national identity as a performer and at the same time creating and confirming the image of a Lithuanian quality in the consciousness of the international community. What is that image? If we link the conductor herself – motivated, resolute, temperamental, intellectual, hard-working – to the Lithuanian orchestral music she conducts – modern, creative, individualistic and at the same time vital, spiritual, and natural – what is being formed is the promise of an exciting and dynamic future.

It is clear that the conductor is not indifferent to Lithuanian compositional music. Gražinytė is sincerely concerned that Lithuanian composers have dignified and favourable conditions in which to compose and disseminate their work. ‘I hope that our contemporary music and our youngest composers will get sufficient support for their work to become more widely known and thrive. All of us should be concerned about them while waiting for the fruits of their labour’, says the conductor. She has become yet another shining and inspirational example, showing that creative talent knows no state borders, and is herself one of those ‘fruits’, contributing to Lithuania’s cultural and symbolic wealth. Moreover, her attention to Lithuanian music has helped make Lithuanian composers better known throughout the world. 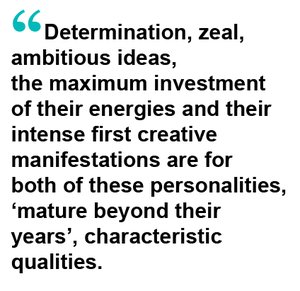 Asked about her intense relationship with the music of Raminta Šerkšnytė (b. 1975), the conductor emphasises the personal quality of that relationship: ‘My connection with Raminta Šerkšnytė’s music is very personal. Probably what fascinates me most is the poetic quality and the mystery of this composer and her work. The “Ramintacism”, the minor thirds. Her personal voice. This voice is also of the highest value in an international context.’ Almost five years of continuous cooperation link Gražinytė with this composer. The tandem of composer and conductor is one of the positive examples of how a focussed and consistent dissemination of Lithuanian music is being carried out on the international arena. Šerkšnytė is also happy with the mutually beneficial collaboration, highlighting the attributes of her music’s propagator which have led to her success: ‘From our very first meeting I have admired this conductor’s ability to interact and engage with people, her enthusiasm and awareness of what she wants to achieve. I am not surprised that she has achieved major success.’[5]

Determination, zeal, ambitious ideas, the maximum investment of their energies and their intense first creative manifestations are for both of these personalities, ‘mature beyond their years’, characteristic qualities. For example, the composer’s orchestral works De Profundis (1998) and Iceberg (2000) conducted by Gražinytė are Šerkšnytė’s graduating works for her Bachelor’s and Master’s degrees respectively. De Profundis, having become the author’s first creative manifesto, is still a firm part of the repertoire played in concert halls throughout the world and has been heard more than a 100 times, performed by more than 20 different orchestras. 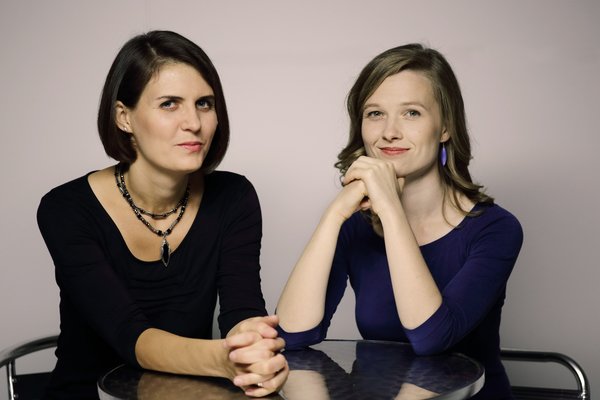 Photo: Modestas Ežerskis.
On Gražinytė’s list of favourites still to be performed, there are a good number of other Lithuanian composers of orchestral music. According to her, ‘all those who have expressed themselves in their personal voice – and there are many of them’ deserve to be presented on the international stage. These are the creators who have put down deep roots as present-day titans of Lithuanian music; very different, revealing the variety of contemporary Lithuanian music: the rational Balakauskas, the deeply folkloric Bajoras, the elegantly emotional Narbutaitė, the extravagant Martinaitis, the monolithic Janulytė… Gražinytė has also no doubts as to the ability of Bronius Kutavičius’ music to engage audiences (performances of the composer’s oratorios and his opera The Old Man of Bone on an Iron Hill are to be performed in 2017 in Salzburg): the conductor firmly believes that ‘Bronius Kutavičius, if he hadn’t used so much of the Lithuanian language in his compositions, would have stood on the same level as Arvo Pärt, very well-known throughout the world. On the other hand, he would not have been our Kutavičius if he had acted differently!’ She has also not forgotten those who have probably contributed the most to the formation of Lithuanian compositional traditions. According to Gražinytė, she would also like to perform music ‘of generations no longer with us: Eduardas Balsys, Julius Juzeliūnas, Juozas Gruodis, and, of course, Mikalojus Konstantinas Čiurlionis.’