Ernestas PARULSKIS | How to Listen to Music II 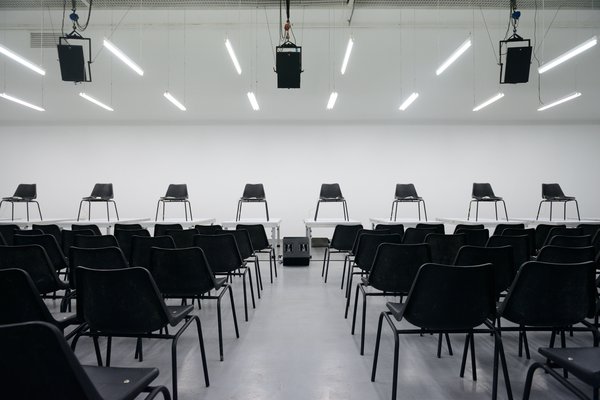 Photo: Martynas Aleksa
In an essay written a quarter of a century[1] ago I advised people who wished to read during a concert to sit in the balcony because of the better light and fewer people being there. I also suggested that people not read newspapers and magazines that rustle and give them away. It’s the balcony! They are newspapers! Wonderfully telling details of a former and disappeared reality. And evidence of the shallowness of a neophyte’s experience. Only someone for whom the Philharmonic Hall in Vilnius was the only place where music could be heard can have written that.

Today the advice to take a book to a concert and look for a comfortable spot in a corner of the great hall will not work – for several reasons. Firstly, new technology has changed habits. But no – habits haven’t changed. People, who once upon a time used to have a paperback detective novel in their briefcases just in case they found themselves unexpectedly having to kill time or temporarily prisoners in a boring environment, now have that novel on their smart phone or Kindle. On gadgets that emit light. Even if you set your screen to the lowest possible brightness level, it is still going to give you away, like a lighthouse built in the wrong location, signalling the fact that here sits a concertgoer who doesn’t respect other concertgoers, the performers and the music. Within at the most fifteen seconds the transgressor will cave into the pressure and stop reading the novel. 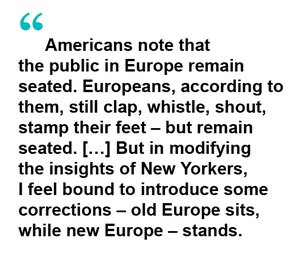 The second reason, preventing one from reading while listening to music, is the market: there are no longer any comfortable and empty corners in concert halls. This began in about 1996–1997 when new, young managers in the music business completely changed the behaviour of the concert-going public. Suddenly (over several years) hordes of people began to go to listen to contemporary music intended for professionals, connoisseurs and researchers. Of course, they began to invade halls that had – over the decades – built up a strong, symbolic capital and managed to monetize that capital with new content where the ten most popular compositions are performed by the six best-known orchestras and the twenty most famous performers. To find an empty corner in places like that to read in is impossible. It is also hard to do that at the most important contemporary music festivals (there aren’t many of those either: one location in a small but not poor country and one extra location in a rich one) – it is hard to even buy a ticket to get into such places on the same day. The only concerts where there is a guarantee of some free seats are those which are put on to mark important days in the Lithuanian calendar by the Ministry of Foreign Affairs in those countries where they have representation and performances by local ensembles in various strange venues. But it is not worth reading there since the tactic of listening to music in an environment like that takes on new and interesting opportunities.

It was sometime in 2008 at the end of some concert that a man stood up while clapping and then the whole hall joined in. At the time I thought this was a one-off. I couldn’t have been more wrong. Eight years later, Lithuanians at the slightest opportunity give standing ovations at the conclusion of every performance. Our concertgoers don’t care at all about what’s happening on the stage – the public jump up on their feet when pupils from the ballet department of the National M. K. Čiurlionis School of Art take a bow and when the curtain comes down on an ordinary repertory performance. For a long time, I could not understand where this enthusiasm had arrived from in our country until I did some searching on the internet. The results I got were categorical: the fashion started in America. Professionals over there began observing standing ovations over a decade ago and found its cause is pricing: with the steep increase in the price of tickets, the inexperienced public decided that in paying a lot of money they were always getting an exceptionally high quality product which they had to additionally show their appreciation for with ovations. In justifying applause of this kind by the desire of the spectators for self-hypnosis, Americans note that the public in Europe remain seated. Europeans, according to them, still clap, whistle, shout, stamp their feet – but remain seated. A tourist in commenting in a discussion about ovations shared her London experience. She went to a musical in London and could only get a seat in the front row. At the end of the show, she jumped up straight away and began clapping in the belief that everyone behind her was doing the same. She understood her mistake when someone pulled hard on her jumper forcing her to sit down – she was the only one standing in the stalls. Well, not quite – so was her friend. 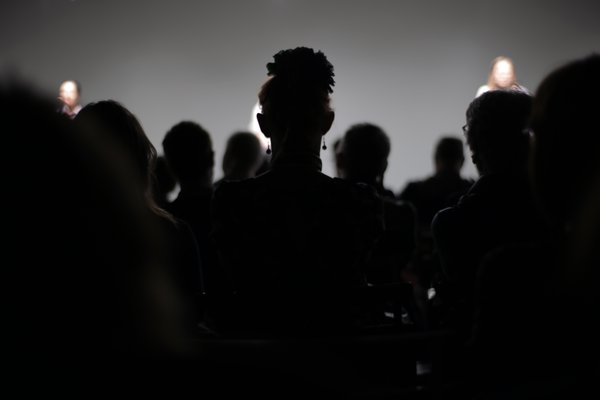 Photo: Rugilė Barzdžiukaitė.
But in modifying the insights of New Yorkers, I feel bound to introduce some corrections – old Europe sits, while new Europe – stands. Of course, the question may arise as to why ovations are an evil. Firstly, standing is not comfortable and it is difficult. Secondly, when standing, equality in height disappears and shorter concertgoers cannot see anything. Thirdly, there can be no adequate evaluation of the work being watched or listened to or of its performance. Since the ovations come from people who show respect in the ability of other people to sing and play instruments.

And it is for the real virtuosos of music listening to decode those concertgoers. Not all of them, of course – that would be too easy a task. The challenge is to deduce during the concert who will be first to jump up at the sound of the last chords. I cannot give universal advice but my experience shows that the initiators of ovations are the ones who look around the most, and out of those looking around – a little too dressed up, but without any eccentricity – there will be a couple with one of them wearing a grey, shiny metallic suit. In second place in frequency are slim bespectacled thirty-year olds of both sexes. By the way, during pauses between the compositions it is the former, the ones wearing grey suits, who most often clap. 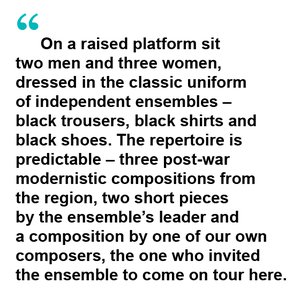 Things like that – clapping between pauses – are almost impossible to hear at concerts of one particular genre. In listening to live performances of contemporary music I have noticed a strange pattern: when I go to concerts at which lesser known chamber ensembles play the work (both new and retrospective) of not very well-known composers I can count thirty members of the public besides me, and, within the range of statistical error, sometimes less and sometimes more. The size of the town has no bearing – concerts of this genre attract thirty people both in Vilnius and London, as well in Białystok. The number of concerts on at the time makes no difference – if five contemporary music ensembles are performing on the same day in Berlin, thirty people will turn up at each of the concerts, and if there is only one concert – it will be the same number. It would seem that this is an excellent illustration of the economic theory of the ‘long tail’, but, after some reflection, I grasped the real reason for this phenomenon.

Looking at things in a simplistic way, composers are the only ones in the whole creative universe who need interpreters for their creative work and those interpreters in their turn are absolutely dependent upon composers. Even digital compositions, which it might seem computers could perform, are controlled – when the performance is for an audience – by performers with computers. This was grasped by musicians very early on and that is why composers, instrumentalists and vocalists join ensembles. A very small number of such formations become stars while the rest take various, infrequently wider, most often – narrower and more localised niches. When both composers and performers and their listeners celebrate their fortieth birthdays, their careers, experiences and curiosity become stabilised, forming the above-described demand represented by thirty members of the audience. Sometimes, when ensembles organise a festival or a genre-specific themed concert, the public is multiplied to an impressive audience of several hundred people. But most often their concerts take place in unexpected spaces, where it would be difficult to employ the above-described tactics of music listening – there are not a lot of people, everyone can be seen, no one claps during the pauses and, of course, there are no ovations. 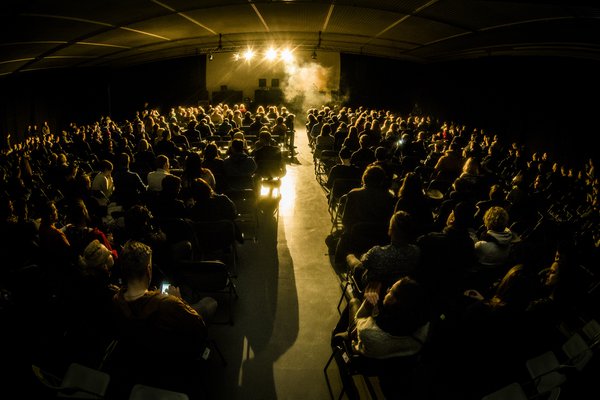 Photo: Dmitrij Matvejev
But even in such strict conditions there is a way out. I call it the ‘design prognosis test’. The rules are not complicated. The concertgoer, taking into account the music being played, the nationalities of the performers and the composers, as well at their permanent places of residence, their concert apparel, the subtleties of lighting and sound, has to assess their style priorities and design mentality and guess how the design of the CDs being sold after the concert will look. For the less experienced I give here an example of the analysis used.

Let us say that an ensemble which has given itself the name of Five Strings, perhaps because it’s a string quintet, is playing. They have come to play for us from the capital of a country on the periphery of the former Austro-Hungarian Empire – they are the recipients of a grant from a cultural mobility promotion programme. On the stage or, to be exact, on a raised platform sit two men and three women, dressed in the classic uniform of independent ensembles – black trousers, black shirts and black shoes. The distances between the musicians sitting against a black background are somewhat larger than normal. That is done for effect – the musicians are lit from above and the light delineates the five zones they sit in. The repertoire is predictable: three post-war modernist compositions from the region, two short pieces by the ensemble’s leader (and first violin) and a composition by one of our own composers, the one who invited the ensemble to come on tour here. All the evidence shows that the design of the records will be simple and I can state with confidence that on the table with the merchandising after the concert we will find a record on the cover of which a photograph will be used of the quintet’s members looking up at the lens of the photographer standing in the balcony. After a pause I get the answer that I’m right as regards the group photograph but the background used for the musicians will be changed to a fragment of a reconstructed industrial building. After the concert we rush to the table with the merchandising and I then understand that I haven’t passed the test. Where did I make my mistake? I didn’t notice that the performers’ black shoes are in fact black sneakers. And everyone knows that black sneakers are a demonstrative artefact of urban ideology.