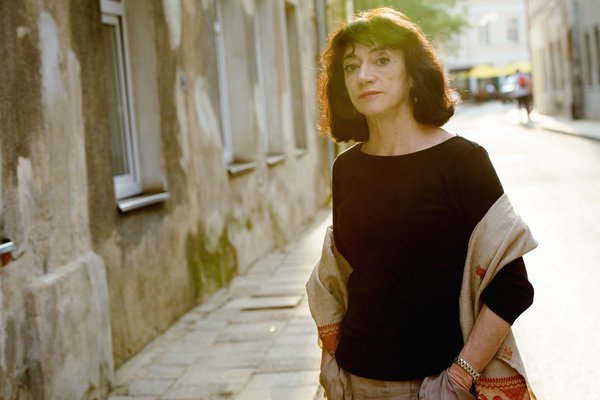 Photo: Martynas Aleksa.
Onutė Narbutaitė’s (b. 1956) music transcends time and place; resists any attempt at stylistic categorisation or pigeonholing; and triumphantly leaps the bounds of any demarcation of limits upon its emotional and intellectual compass.

Her magnificent oratorio from 1997, Centones meae urbi (A Patchwork for My City), illustrates this transcendence of time and place perfectly. So extraordinarily economical in its use of musical materials, spare in its textures to a point of asceticism, this music conjures up a vision of her beloved city of birth and of all of her life, Vilnius, that collapses the centuries into a single point of artistic vision, concentrated with needle-sharp accuracy. Her love of her city and country through all their vicissitudes of history and of destiny, punctuated by distantly heard fanfares, is something of which most of us in this restlessly mobile twenty-first century can be justifiably envious.

For few composers today have the good fortune to be so firmly rooted in one place. I recall with deep pleasure an afternoon when Onutė and her husband Rimantas shared their love of their city with me: visits to several of the astounding churches built by Italian architects of the Baroque, chief among them the wonder of the Church of Saints Peter and Paul, where a Mass was in progress in a church bursting to the walls; an hour or more spent deciphering inscriptions and simply sensing the still, strong presences in the intimate, soft surroundings of the Bernardine Cemetery; a gift to me over dinner of the wondrous book Il Barocco in Lituania, that I shall ever hold precious.

And the revelation of Centones meae urbi is that, in the local and personal is to be found the universal. Human experience, human understanding of the great issues of spirituality and of our place in history and in the cosmos, are most fully developed when they are most powerfully rooted. Eloquence through restraint. Universality through the specific. Out of the tree with deepest roots grows the canopy that protects and enfolds the greatest extent and greatest diversity of teeming life, which lives and flourishes thanks to its relished shade. 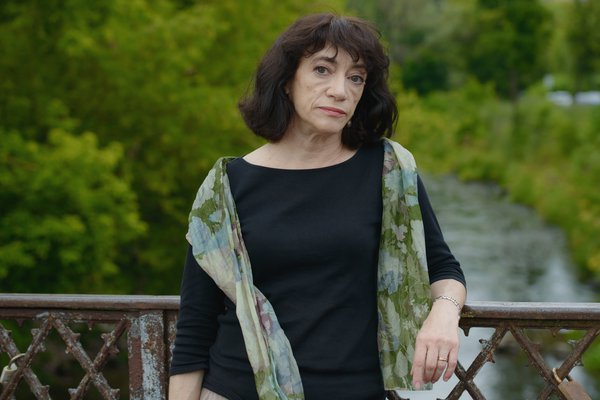 Photo: Martynas Aleksa.
We understand this, too, from Dante, who, though he travelled as far afield as Paris during his youthful years as a diplomat, spent his entire life essentially in two places: the Florence of his birth, and, following his exile, Ravenna and the Marche; and whose work encompasses the whole of time and of eternity. And we hear it in Bach, who almost certainly never travelled more than a couple of hundred miles from his place of birth; though the world came to him in the form of copied manuscript scores that ensured that, from his youngest days, he was growing up a composer at first more Italian than German.

Then there is Narbutaitė’s magisterial work Tres Dei Matris Symphoniae (Three Symphonies of the Mother of God, 2003). It would be hard to imagine a ‘religious’ work that lies further from any tradition of ‘liturgical’ music. For this is music of the cosmos; music that does not simply depict, but that inhabits the spiritual, a-temporal realm of the Mary of the Assumption (and it is upon the very day of the Assumption in August 2016 that I am writing my final draft of these words!); the Mary who sits at the right hand of her crucified and risen Son; the Mary who intercedes with infinite compassion rooted in her humanness that now lies beyond time.

This is music that breathes the spaces of Dante’s Paradiso, especially those of its twenty-third Canto, where

Indi rimaser lì nel mio cospetto
‘Regina coeli’ cantando sì dolce
Che mai da me non si partì ‘l diletto.
//
So they remained there within my hearing
Singing a ‘Regina coeli’ of such sweetness
That the beauty of it never left me.

And then there is Melodia, the second movement of Narbutaitė’s Second Symphony (2001), of which the composer says,

‘While working on the Melody in the Garden of Olives, I kept wondering whether it is still possible today to compose a melody which would not be an abstract one and would not turn to triviality. This appeared to be one of those more challenging tasks that I have ever undertaken.’ 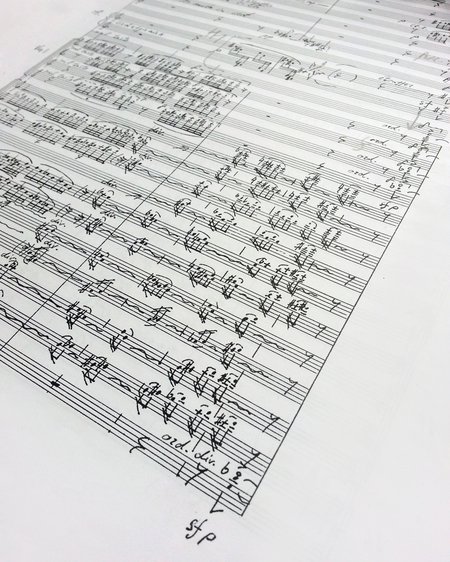 A fragment of the manuscript of 'La Barca' by Onutė Narbutaitė. Photo: Music Information Centre Lithuania.
I find her solutions to this challenge to be breathtaking in their simplicity, sophistication and eloquence. From the very first phrase, the music aspires upwards, heavenwards. An inner, hidden melody in the violas, almost an ostinato, circles upon itself (is this Dante’s ‘circulata melodia’?, perhaps), ever changing in aspect due to the constantly metamorphosing harmonic ‘blanket’ provided, first by the woodwinds, then by the woodwind and brooding brass. All other melodies are but counterpoints to this hidden melody… until, nearly three-quarters of the way through the piece, after almost eleven minutes, an emerging trumpet solo seems at first to be simply another, more elaborate counterpoint. Soon, it is left alone; and this solitary trumpet grows wings, soars ever higher to another realm. His flight disappears into inaudibility, and the true melody continues long after the piece, and the Symphony, have ended.

In the Second Lesson of his Poétique Musicale, delivered (in French) at Harvard in 1942, Igor Stravinsky said,

Onutė Narbutaitė – who speaks reluctantly, preferring to make her statements about music in music – has declared that she has wished to

‘keep myself aloof from the bustle of modern music making.’

Thus, her solutions to central questions that bedevil composers today – harmonic language; when to make use of tonality, when of dissonance; to refer or not to refer to earlier musics; – are eminently personal; totally unbeholden to fashion, trends or commercial pressures. She laments that ‘we live in an epoch deprived of its universal language.’ Her one model is that of Lutosławski, who, simply, ‘sought the truth.’

I marvel that any critic should ever have tried to term her music ‘neo-romantic’; for above all the ‘romantic’ vocabulary is determined by syntax, not by any simplistic answer to the implied question, ‘does this music sometimes reference quasi-tonal structures in its harmonic or melodic frame of reference?’ 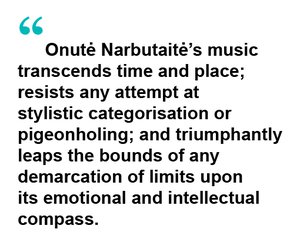 This is most perfectly illustrated by the work by which I first came to know Onutė Narbutaitė: her Fourth Symphony, krantas upė simfonija (river bank symphony), whose world premiere it was my privilege to conduct at the fiftieth anniversary Warsaw Autumn Festival in 2007. I did not choose this work; the programme was assigned to me by Tadeusz Wielecki, Artistic Director of the Warszawska Jesień, on the recommendation of Andrzej Chłopecki, a dear friend whom Onutė and I had in common for many years. I count myself fortunate indeed to have met this music, and this marvellous personality of music, at that time and due to this lucky chance. I had then such a powerful impression of a profound musical mind that I determined, despite the convincing radio broadcast recording that resulted from our work in Warsaw in 2007, to seek out the first possible opportunity to make a polished studio recording of krantas upė simfonija for compact disc. This came in Vilnius in October 2015, as a result of careful planning of special sessions organised by Music Information Centre Lithuania.

More than once, in rehearsal with the Lithuanian National Symphony Orchestra I exclaimed, ‘but this passage is such a powerful reminder of Sibelius!’

What I do not mean is that Onutė’s music in any sense sounds like Sibelius.

What I do mean is that there are processes of growth and mutation of the musical materials that make the listener feel the grinding of tectonic plates one against another; the rising of lava under immeasurable pressures from the bowels of the earth; the unimaginable voltages of an electric storm; the howling of winds that rise within hurricanes and tornadoes; the very destructive-creative energies of the earth itself, if not indeed of the cosmos.

Indeed, this music is often difficult to pre-hear from the page, since it evolves over such large spans. But in the orchestra, in both rehearsal and in concert hall, its logic and power are abundantly clear; overpowering, indeed. And herein lies the answer to that fundamental question of syntax, perhaps better termed, simply, Form. Onutė Narbutaitė’s evolution of a personal practice of musical form has reached a level of control and clarity of creative vision that are hard to call to mind in the practice of any other composer. 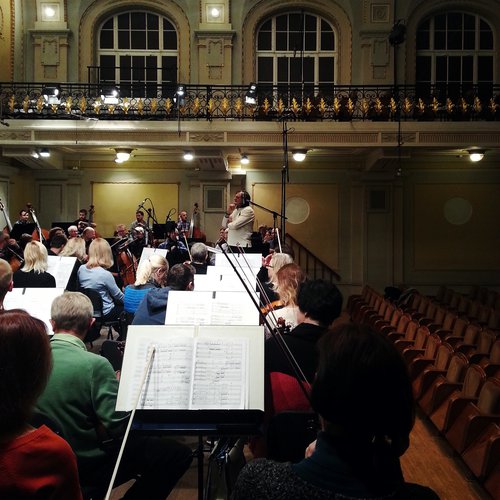 In such music, any surface detail is not necessarily thematic; it is part of the teeming inner life of this organism that recalls the very creation; mimics the mind of God, perhaps. As did Bach. As did Beethoven. As does the Art of Music, ipse dixit, when practised at this level.

And so to the last work that I wish to discuss within the span of this brief paper: the concert suite that I requested Mme Narbutaitė make from her opera Kornetas (Cornet, 2012), which had been premiered to great acclaim in 2014. The continuous music of this roughly twenty-five- minute Suite, in which the orchestra is joined by a mezzo-soprano (the Countess) and tenor (Christoph Cornet) who summarise the main moments of the opera, received its world premiere at the 2015 Gaida Festival under the title kein gestern, kein morgen (no yesterday, no tomorrow). This beautiful work, alongside krantas upė simfonija, will feature on the new compact disc to be released by Naxos in collaboration with Music Information Centre Lithuania; perhaps the perfect ‘expressive’ work – because more literal in its emotional landscape – to accompany the more metaphysical Symphony.

kein gestern, kein morgen is a microcosm of the opera as a whole. Much of the text is sung simultaneously in French and in Lithuanian by the mezzo-soprano and tenor: for example, it opens

recalling powerfully Rilke’s own Epitaph that he prepared for his tomb, a bush of climbing roses at its side, in Raron, Switzerland:

Not to forget the mediaeval,

Pas mes épines qui me protègent, dit la Rose;
c’est mon parfum.
//
It is not my thorns which protect me, says the Rose;
but my fragrance. 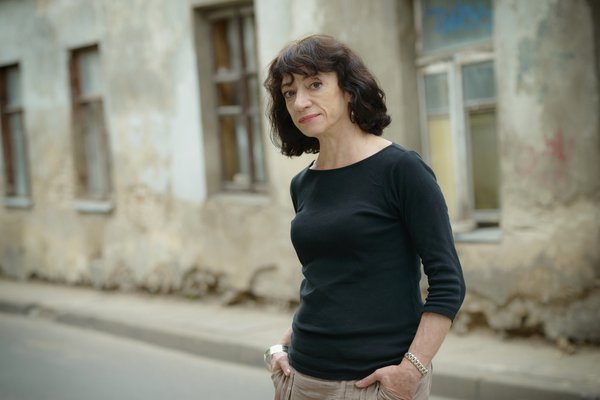 Photo: Martynas Aleksa.
Many moments of melting beauty ensue: for example, the baroque ornamentation of the solo cello accompanying the humming of the Countess, all based over a pedal D, with frequent semitone discords adding emotional complexity to the passage. The long long long crescendo of the Countess on a high F, ‘Oh…’, releasing its tension with ‘… l’amour.’  Cornet’s evocations of ‘la cité sur l’eau’; of ‘Nuits de Florence’; and ‘Ich hatte g’rad im Traum an dich gedacht’ (‘I even thought of you in my dreams’). Finally, circling repetitions of ‘Jokio vakar’ (‘No yesterday’). All superbly singable, wonderfully vocal and memorable, yet without an ounce of compromise of the integrity of Narbutaitė’s vast melodic gift and haunting personal language.

Richard Taruskin got it right: Onutė Narbutaitė is a great composer. My wish is that her music may travel the whole world, for the world is deprived today of a voice that is utterly honest: simultaneously rooted in where we came from and vividly of our own time; not a whit embarrassed to reference the music and culture of our shared past, nor to reflect the turmoil and travail of the twentieth, and now twenty-first centuries; not neo-anything, just simply a great soul that first thinks, first reflects, and then puts pen to paper in pursuit of communicating truths that can only be expressed, and only understood in tones.

The last words are for the composer herself. In 2003, Onutė Narbutaitė responded as follows in an interview for Turun Sanomat:

‘The value of a work has nothing to do with the degree of its complexity and is not determined by the innovation of its content; but before all else by the Soul that inhabits it – or not.’

And in Seattle, speaking at the Baltic Voices Festival in 2004, she said:

‘How life finds its way into music is an intangible and incalculable mystery.’