Austė NAKIENĖ | About Indrė and the Living Nature of Folk Tradition 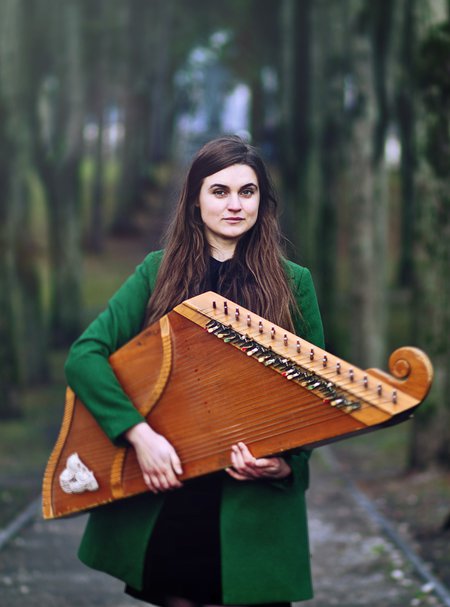 Indrė Jurgelevičiūtė. Photo: Ugnė Henriko.
Warm and resonant female vocals are a characteristic feature of Lithuanian folklore. The iconic older generation belters Veronika Povilionienė and Daiva Vyčinienė are, onstage, not just folk singers anymore – they are symbolic figures with almost mythical powers, the guardians of tradition. Their voices mesmerize the audience, for they are imbued with the experiences of their own and the women of the past. They capture both, lasting resentment and flickering joy. The dignified stage posture and unflustered temper pertaining to mature traditional singers serve as an inspiration for many younger chanters, including Indrė Jurgelevičiūtė. While listening to her one is presented with the steady flow of a song, a full-bodied voice and a kind of a gentle melancholy.

Nevertheless, traditional songs performed by Indrė sound quite unconventional. Unlike the older singers Indrė does not concentrate on the authenticity of a musical performance, preserving regional dialects or genuine melodic embellishments. Instead, she often employs only a fragment of a traditional melody, and sometimes combines a few different chants together, treating them as if they were sporadic ideas that recently came to mind and not as songs with a centuries-long history. Her performances of Lithuanian songs are less about her connection with the women of the days ‘of yore’; instead, they allow her to be herself, a woman whose own traditional past triggers and unleashes the imagination. The ethnographer Daiva Vaitkevičienė has pointed out that “While speaking a mother tongue, one involuntarily becomes a poet, for poetry is a sonic and semantic interplay, expressing the relationship between the separate components of the world. So is a song, for just like language, it is not simply an encoded form of communication, but also a vocal sound-game.”[1]

Indrė first heard traditional songs from her grandmother, later she joined a folklore ensemble at school. She is an eager learner and a constantly evolving performer. She studied the traditional instrument kanklės in music school, jazz vocals at the Lithuanian Academy of Music and Theatre, and world music at the Rotterdam Conservatory. Her singing is not limited to Lithuanian traditional vocal techniques and this is what distinguishes her from her predecessors. As a member of the multinational band Merope, she intertwines Lithuanian melodies with new compositions and electronic passages. During her engagement with MaLituanie where she played the kanklės, she fused together Lithuanian and Malian ethnic sounds. Today Indrė moves back and forth between Belgium and Lithuania and is working on expanding her vocal dexterity by learning classical Indian singing. 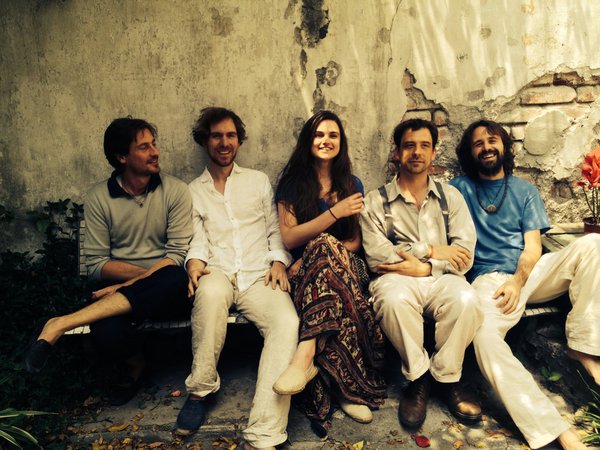 Merope. Photo: from the personal archive of the band.
Indrė values new experiences, social interactions and creative stimuli. Remembering her time with Merope, an international band based in Rotterdam, she recalls: “Every two months or so we would meet in some country for an improvised creative workshop. We would stay together for a week. We would write, rehearse, perform, record something, then separate, for we all had our own musical undertakings in our home countries. These meetings were a lot fun. We were all engaged in different projects and thus gathered new ideas and inspirations, so once reunited again our creative process would start afresh. Our first album was recorded in the mountains. We all stayed in one tent, away from the world and the everyday routine. After frequent tours to different countries we became like a family who shares musical as well as life experiences, lessons and adventures.”

The band members are: Jean-Christophe Bonnafous from France, Bert Cools from Belgium, Miguel Hiroshi from Spain, half German and half Brazilian Marcello Windolph and the Lithuanian chanteuse Indrė Jurgelevičiūtė. When asked about what they all have in common, Indrė answers, “I think we have similar spirit and energy. We like music that has warmth and calmness to it; we love nature and people. All of us value humility, sincerity and kindness, and we try to create a better world with our music. We are all inspired by nature; our second album is being dedicated to water. We want to encourage people to pay attention to the natural world. Having said that, we come from different backgrounds and thus we complement one another. Our music is like that, too. It is composed of different experiences and distinct folk elements – it has Lithuanian melodies, meditative Indian passages, flamenco rhythms, jazz improvisations and electronic bits.”

The first album by Merope titled 9 days was recorded in 2012 during one of the aforementioned creative workshops. The artists literally spent 9 days camping in the Sierra Nevada Mountains in Spain. The album features improvisations by the band members as well as some non-musical sounds coming from the nearby villages and the surrounding nature. A few traditional Lithuanian songs performed by Indrė were also included in the lineup (Rūta žalioj, Sodai sodai, leliumoj, Oi, kas girioj pamigo). Through these particular songs Indrė unfolds her soulful personality, and one can sense her relaxed and collected posture, while her emotions are being shared by the other band members. The feeling of camaraderie is sensible throughout the whole album, as is the connection with nature. The music unfolds unhurriedly, as if mimicking the spreading out of leaves and flowers, and life without anxiety or rush. 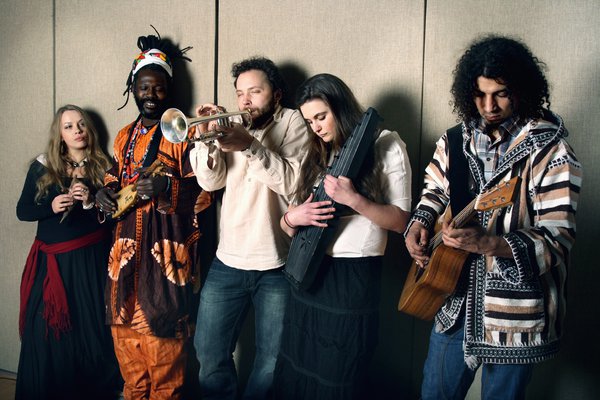 MaLituanie. Photo: Gera Muzika Gyvai.
Their latest album Amaranthine (2015) is a continuation of the first in terms of mood, soundscape and sonic colouration. The characteristic attribute here is the calm and even rhythms, akin to rippling water or some ancient scriptures. When these five artists come together, a free improvisation, active listening and subtle intervention into the musical ‘whole’ becomes their most organic way of functioning.

The performances of ethnic songs today are restrained from imitation and tend to employ creativity more often. The scholar of traditional Swedish chanting Ingrid Åkesson states that singing is no longer a merely orally transmitted subject; it involves individual decision-making: “Contemporary traditional singing is borrowing from many different genres, including jazz, classical and world music. The folk artists tend to have formal education and take interest in jazz, rock, early music and bard music. For many the exposure to these genres happens early on in life. Many performers combine traditional and current singing styles by imitating other artists and simultaneously crafting their own expressive language.”[2] This statement is perfectly appropriate in the context of the young Lithuanian singer Indrė.

Indrė Jurgelevičiūtė has recorded two albums with musicians from Africa. In an interview she shares that meeting Malian-born Sissoko was almost accidental: “Žilvinas Švarplys, the author of the project Gera muzika gyvai (Good Music Live) came up with the idea. After a successful spontaneous duet by Baba Sissoko and the multi-instrumentalist Saulius Petreikis, Žilvinas encouraged them to record an album together. A few more musicians joined them in a studio, including Laurita Peleniūtė, Viktoras Diawara and myself. It is funny – we did not know one another before this, so you may say music has united us. The album entitled MaLituanie was finished in 2013 and quickly spread around the globe.” 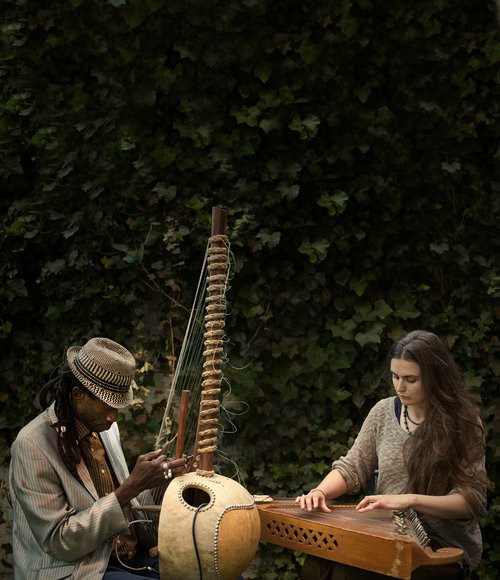 Solo Cissokho and Indrė Jurgelevičiūtė. Photo: Felipe Pipi.
While playing the kanklės and singing with the Malian musician, Indrė has truly embraced the idiosyncrasies of African music. In her duet with the Senegalese musician Solo Cissokho, she began exploring the similarities between Lithuanian and Senegalese folklore, which resulted in a truly unified sound of the mutually created music. The album Solo & Indrė was released in 2015 and received immediate acclaim, including first prize in the World Music Network Battle of the Bands competition. The balanced interaction of the Lithuanian kanklės and the Senegalese kora, polyrhythmic sound of strings in the background and a synthesis of melodies sung by both artists all result in a truly captivating album. It is quite apparent that working with the kora virtuoso was a great experience for Indrė, which she confesses to herself. “I believe life is meant for learning, and every style has something to offer. After playing with Solo Cissokho I find myself incorporating his rhythms into my own playing. Studying various styles and traditions, meeting representatives of different genres and music cultures is very rewarding and it encourages one to seek individual expression. I am currently involved in an alternative minimalist Belgian project called Book of Air that examines the notions of sound and time in relation to sound design, and I intend to apply these concepts in my own compositions.”

Indrė has made appearances in choral music as well. In 2014 she sung with the Vilnius city municipal choir Jauna muzika in a very successful programme Keliautojo užrašai (The Notes of a Traveller), where she performed as a soloist.

In the past, traditional music would only travel to new places when brought there by the wandering artists. In the 21st century, the transmission of music is no longer constricted. A recorded piece of music, like a kernel, may journey through the world and grow seedlings in a foreign soil. The internet allows us to explore all kinds of music. It appears that Indrė has planted little seeds of Lithuanian music in the most unexptected territories. All that is left to do is to nurture them so that they can germinate, grow and blossom.