MANY MUSICS. Linas Rimša: I Discover Myself in Diversity

It took almost twenty years for the multi-talented composer, performer and band leader Linas Rimša until his diverse activities in the field of ‘many musics’ – at least a tiny bit of them – were finally committed to disc in the form of two recent CD releases, Sutartinės Party and Old Faith, which appeared with a slight time gap in 2009.

Foto: Modestas Ežerskis
Being in constant demand at major jazz festivals in Lithuania since the beginning of the 2000s, Linas Rimša performed here and there with his different bands, playing keyboards and harmonica himself and presenting programs which consisted either solely of his own compositions or of jazz standards, unusually twisted in his arrangements. However, it didn’t take long when he became sought-after in the contemporary music events as well, for his fresh musical ideas and the ability to seamlessly fuse together most disparate styles and genres. The series of his appearances at the biggest contemporary music festival in Lithuania Gaida started in 2001 with Acid Paraphrases – acid jazz-flavoured reworkings of Lithuanian contemporary classics. This was followed next year by the more light-hearted Opera in da House whose title speaks for itself: standard operatic numbers soaked with jazz, dance and hiphop. Die Welt ist Traum(a), his third large-scale project for the Gaida Festival (2004), gathered together top-class Lithuanian and international classical and jazz performers, with the Dutch trumpet queen Saskia Laroo in the forefront. Based on the masterpieces of romantic music, it displays as many contrasting styles and moods as never before, from soothing ballads to free jazz frenzy, from gangsta rap to ecstatic world music anthems. Intimacy (created in 2007 for the Vilnius Festival, the most important classical music event in Lithuania) is a kind of intimate sequel to the former – a novel version of the genre of song cycle, for baritone, piano and glitchy ambient electronics – exploring timeless affinity of the past to the present in another ingenious and unexpected way.While still studying composition at the Lithuanian Academy of Music, Linas Rimša was making his name as a host and director of radio programmes on jazz and new music, as well as a frequent performer at local jazz clubs. When the political boundaries became history with the re-establishment of Lithuanian independence, he was among the first Lithuanian composers to seek further musical education and new musical influences abroad – from 1995 to 1996 he studied composition at the Royal Danish Academy of Music. His return to Lithuania was a decisive moment in his creative career because soon afterwards he became more and more involved in producing music that dug into a virgin soil of Lithuanian nu-jazz and world music scenes, alongside his more academic works for chamber ensembles and various electro-acoustic combinations. Equipped with loads of positive energy, an expertise in musical repertory and a dexterity of a resourceful arranger and melodist, he became a unique ally between the segregated worlds of academic music elite, jazz, pop and urban ghetto. He wrote music for contemporary art exhibitions, theatre and film productions (receiving the major Lithuanian film industry prize Silver Crane in 2009), produced pop music albums, and even came to write and arrange songs for Lithuanian entries to the Eurovision Song Contest. His long-term work as a teacher at the M. K. Čiurlionis School of Arts and the Lithuanian Academy of Music resulted in two important textbooks on jazz published for the first time in Lithuanian – The Fundamentals of Jazz Improvisation (author, 2001) and History of Jazz (editor and contributor, 2002).

Among a number of his other crossover acts of different sorts, there is notable group of works incorporating ethnic music from Lithuania and various corners of the globe. “As for working situation, by incrusting traditional Lithuanian music and processing it in my own way, I mix these authentic melodies with African ones, with Turkish rhythms, with electronics and whatever... For me, it’s always fascinating and even ecstatic to find some similarities and hear that some elements match together. Then you realise that you did not create those similarites – they simply exist. Thus by integrating Lithuanian folk music into other styles I experience emotions that are simply human, caused by the things which touch us all. These things can be traced in all other musics and people of the world when you communicate with them. This diversity of culture, the ability to find a common language with very different traditions, invigorates and inspires me. I discover myself in this diversity,” the composer says.

The landmark in his earlier efforts in the vast latitudes of ethnic/world music was a grandiose two-hour long World Music Show (2002) that involved chamber orchestra, choir and jazz musicians from Lithuania, along with a wide range of ethnic performers, from Turkish drummers to Lappish singer. The next year saw the debut of Sutartinės Party – one of his most internationally successful projects, created together with his long-time friend and collaborator Linas Paulauskis. Sutartinės is a unique form of Lithuanian folk music – ancient multivoiced songs and instrumental tunes, with polytonal counterpoints, unusual sounds of parallel seconds, syncopated rhythms, ritual dancing and trance-inducing atmosphere through endless repetitions. Therefore, it could probably go well with different varieties of today’s electronic dance music?.. (And the very word “sutartinės” comes from “sutarti” – to match, to agree, to be in harmony.) Testing out this compatibility was a request from the Berlin contemporary music festival MaerzMusik and an initial idea behind the Sutartinės Party group, which toured several European countries since their debut at MaerzMusik in 2003.

Linas Rimša’s latest world music project, Old Faith (2009), was again something of a surprise – this time he was inspired by traditional chants of the Russian Old Believers. “I was deeply moved by chants and poetic texts of the Old Believers tradition, overwhelming with their spontaneity and naivety. It seems that people created these chants in the immediate presence of God, talking with Him and overpowered by astonishment, fear and trembling...” Created in a collaboration with the Vilnius Russian folklore group Arinushka for the Pokrovskiye Kolokola multicultural festival in Vilnius, Old Faith addresses the audience with everlasting questions of faith, love, life and death. 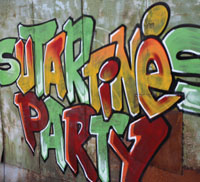 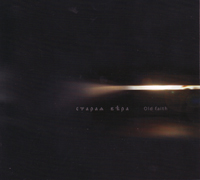