Arturas Bumšteinas is a composer belonging to the younger generation, a sound artist and an active member of the visual arts scene. Recently he has become quite visible in all of these spheres. His solo exhibition titled Demo can be seen in the Antje Wachs gallery in Berlin till mid-April, his laptop quartet 20,21 is invited to do an hour-long performance at the 60th Holland Festival, which will take place in June. This interview is intended to allow the reader to have a closer look at Arturas’ artistic strategies and creative principles as formulated by the artist himself.

- You are known for your numerous collaborative projects, such as the Open Mixer event series and the online publishing platform http://www.mixthemixthemix.com/. You have also taken part in many international collaborative projects. The laptop quartet 20/21, established by you, has made a successful and intriguing debut in the electronic music scene. What is your definition of collaboration?

- On some occasion I have paraphrased the motto of CAC TV (Contemporary Art Centre TV): “Each collaboration is a pilot one, each is the last one.” I understand piloting as synonimous to experimentation, and experiment as synonimous to an attempt – an attempt to formulate your own vocabulary that you will be able to use later in forming more complex creative structures. In a collaboration, any action that you make can infl uence its further progress, as well as its end. However, this is not as important as the experience that a pilot gains after the plane crash. Sometimes it is precisely the catastrophe that starts everything (e. g. in the case of Joseph Beuys).

- It appears that the very different stylistics of electronic, electroacoustic and instrumental music are almost equally important to you. One of your earliest works, Antiradical Opera (as well as several more recent ones – This Uniform, Boards of Imagination, Second Sequentina), demonstrates noticeable influences of classical minimalism. How important is the re-actualization of these musical cultures and styles in the process of searching for your own distinctive voice?

- I would say that Antiradical Opera is a catalogue of such re-actualization attempts, although it does not mean that it is a mash of different styles, and I would also avoid the term eclecticism here. It is important that this work consists of several parts that were recorded between the years 2001 and 2005, thus the whole work resembles a stylistic chronicle. In the process of searching for one’s original style, the influences are re-actualised unconsciously, gradually distinguishing between what is and what is not a part of one’s identity. If one is reactualizing these influences consciously, then this process starts resembling DJ’ing (think of Paul D. Miller’s works). The other works that you mentioned are actually classified as minimalist incorrectly. There is a difference between repetition as the signifier and the same repetition as the signified. The illusion of minimalism can also be created from what Sol Lewitt expressed with his phrase “The most important is the most obvious”. This obviousness surfaces when a certain aspect of form is made dominant and subordinates all other aspects. In theory this may resemble minimalism, but is not equivalent to the latter, especially to classical minimalism. 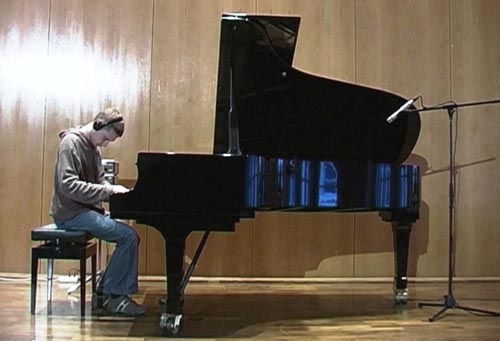 - The neo-conceptualist trend, increasingly dominant in the visual arts, gradually becomes the trademark of your artistic identity. Conceptual links between visual and musical elements are important in your work Bumšteinas Plays Baldessari Sings Lewitt, the performances of the 20/21 quartet, reinterpreting the graphic scores of the XX century classics through the language of electronic music. In the work Klavierkonzert you have interpreted the soundtrack of Joseph Beuys’ performance Die Schottische Symphonie. What are the motives behind the deconstruction and reflection of both the visual and the musical languages in your works?

- The only motive is the desire for a direct contact with the primary material. Sometimes I think of myself as a ‘human filter’, that is probably the most accurate description of my artistic strategy (however, there are no universal filters that can deal with any kind of substance).

The two works you’ve just mentioned, Bumšteinas Plays Baldessari Sings Lewitt and Klavierkonzert, are the results of taking similar materials from the relatively visual art context and transferring it to the relatively musical context. This transfer can be compared to the relationship between an impression and the memory of that impression. What I hear through my headphones is the space of my personal impressions, and the sounds that my piano simultaneously produces are the materialization of these momentary impressions, transcending my personal territory and becoming a part of the hall’s acoustic interior.

In the case of the laptop quartet’s performances, most rehearsals take place with each member of the quartet preparing an individual acoustic interpretation of the graphic material, which is then coordinated with other interpretations, making the filtered material highly multilayered and the final result virtually unpredictable.

Other types of filtration techniques include the “human torch” and the “human transistor” one. In the first case, the artist, blending the various musical and visual infl uences, virtually inflammates and inhales the primary material at hand, never really concentrating on one type of material. In the second case, the artist resembles a receiver tuned to a single aesthetic ‘frequency’ and transmitting the received waves as music that has a transcendental quality (consider one of today’s most interesting composers Rytis Mažulis).

- You are an academically trained composer. This is anything but an obligatory condition or even a dominant trend in the electronic music scene. The attempt to fi nd an individual creative manner may require struggling with some clichés of the formal education, as some artists have confessed. What is your relationship with that?

- All types of education, be it academic, anarchistic, intuitive and so on, are equally important. Even more important is the right timing for it. I think that ‘erasing’ the knowledge that was acquired in the most appropriate time equals suicide for an artist. This annihilates the extremely important strata that are laid down during the artist’s very first ‘dates’ with art. I acknowledge that all of my visual and sound works are particularly connected with an impression I had when I was thirteen. Back then I visited the CAC exhibition Fluxus in Germany 1964-1994 and saw art and recognized it as art for the fi rst time. Later, for about a year, I was exchanging letters with one of the Fluxus’ founders, prominent interdisciplinary art theorist Dick Higgins, who introduced the term intermedia to the contemporary art discourse. It’s a paradox, but I believe that intermedia would become my ideal creative mode even if I would attempt to resist it. I simply cannot divide myself into two unrelated personalities – that of an artist and that of a composer.

- An inevitable question: what are your future plans and anticipated projects?

- My solo exhibition titled Demo can still be seen in the Antje Wachs gallery in Berlin till mid-April, while another exhibition is scheduled for the coming autumn in Sweden. The laptop quartet is invited to do an hour-long performance at the 60th Holland Festival, which will take place in June. The performance will take place in one of the Muziekgebouw halls. The quartet’s further plans include the release of a DVD, which is prepared by the publishing department of the Turning Sounds festival. I also plan to take part in several experimental music festivals in Lithuania, Poland, USA and Finland. During this year’s Jauna Muzika festival, I will present my new work titled Weightshift. It will feature the sound of four synthesizers with keys pressed down by metal bars. The total weight of these bars will add up to 5.5 kilograms, which is equal to the weight of Wagner’s The Ring of the Nibelung. The resulting sound will be augmented by real-time sampling technology. In the domain of acoustic music, I’m working on my graduation work a symphony and writing two works for the Elole piano trio (Germany) and the NyME chamber ensemble (USA).