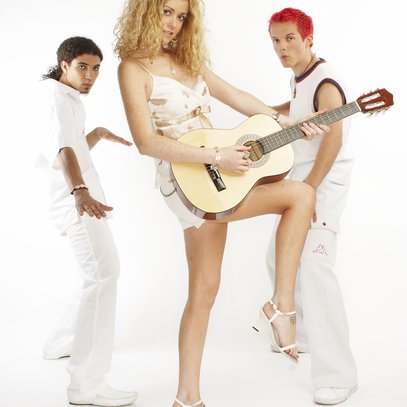 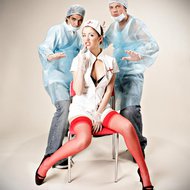 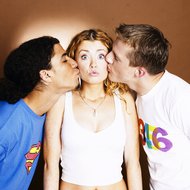 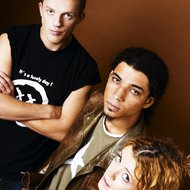 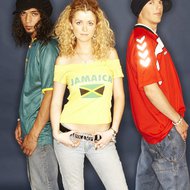 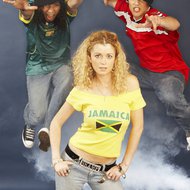 As cosmopolitan as one can get in Lithuania, SKAMP is a "pop-meets-funk-meets-r'n'b-meets-rap" trio featuring an Irish singer Erica Jennings, an African Lithuanian producer Viktoras Diawara and a Lithuanian rapper Vilius Alesius. Since hitting the spot with their innovative cover of Gershwin's Summertime in 1998, Skamp has become one of the most respected Lithuanian band with strong ambitions for an international career. 2004 saw the release of Reach, an album recorded in Dublin and London with well-known producer Jez Coad (famous for his work with Simple Minds etc.) Having won several gongs at ‘Just Plain Folks’ award ceremony in Hollywood, made Lithuania proud with their brilliant performance in Eurovision Song Contest 2001 and played warm-up gigs for the likes of Macy Gray and Wheatus, Skamp receive a wildly positive reception all over the place, whether playing a jazz festival or pop event. With 5 studio albums and 2 remix compilation under the belt, Skamp show no signs of slowing down – 2007 saw the release of their first live CD/DVD Live & Deadly. And MTV's nomination for the ‘Best Baltic Act’ award (both in 2006 and 2007) is definitely an icing on the cake of this gang's successful career.

Deadly - Thinking About You

X
Deadly - Thinking About You

SKAMP are a perfect example of the quality music that is storming out of the new EU countries. Producer Vee Diawara, singer / lyricist Erica Jennings &  rapper Vilius Alesius teamed up to bring us finely crafted, thoughtful lyrics and catchy melodies.

A delicious cocktail blending well together, Vilius grew up in Lithuania; Erica studied singing and dance in her hometown of Dublin and Vee was raised in Mali by artistic parents. Though most of their lyrics are in English, the trio have released tracks mixing in French, German, Lithuanian, Russian & Bambara.

SKAMP burst onto the Lithuanian music scene in May 1998 with a hip-hop cover version of George Gershwin's Summertime mixing the summer classic with  french and lithuanian rap. The song shot straight to the top of the charts proving that their blend of cultural and musical styles worked. Much success, many hits, late-nights, tours and fans followed. Since then, the group have gone on to release 6 albums, (they' ve sold over 80,000 units) and they’ve set up their own record company (Tabami Records). SKAMP are today one of the most respected live bands in the Baltics having won a long list of music awards along the way. They have also supported acts such as: The Black Eyed Peas, Macy Gray, Reamonn, Robert Plant, Wheatus, The Bomfunk MC’s  and many more.

Since 2003 Skamp have started working with several established  producers from the UK  & the US (Oliver Leiber  & Dave Gamson, Jez Coad, Stuart Brown, Jon Kingsley Hall and George Stewart). Thanks to those collaborations SKAMP’S fifth studio album “Reach”, made in London & Wales, is a solid pop rock creation. The album has some great hit tracks like “Split the atom (Na Na Na)” and “Calling after me”.

Their latest album “Deadly” has been recorded in Mali & Lithuania fulfilling an old dream to mix African musical elements with the typical SKAMP sound. Many people say SKAMP are to be the next “big thing” to emerge from the new EU countries.

Whilst recording they’ve been playing a few concerts in Erica’s birthplace Ireland. Here’s what the Irish press have said:

“... right from the first song the crowd are with them. And within one song I my Irish friend are with them too. They're fresh, they're lively, they have umph. Most importantly they really enjoy themselves...Believe me. I've been Skamp’d”
Sunday Independent (02 / 05 / 2004)

“A kind of cross between The Fugees, Faithless and the Chilli Peppers, with a strong pop sensibility and metallic edge”
Hotpress Magazine (11/02/2004)

“She’s enjoyed a string of chart-topping singles, plays to packed houses and consistently outsells Britney Spears and Madonna… that’s because the 23 year old is the head-turning lead singer of SKAMP who are massive in the former soviet states… ”
Ireland on Sunday (15 / 02 / 2004)

- Many festival gigs as Headliners throughout the Baltics with an audience attendance reaching over 25.000. Many of these events were televised live.
- Their own out-door gigs had audiences of up to 10,000.
- Eurovision Song Contest 2001 - 30.000 (Parken Stadium - Copenhagen) / over 150 million via TV
- Numerous TV appearances in the Baltics such as Prime Time programmes, Award ceremonies, live televised concerts, morning shows etc.
- SKAMP “Unplugged” 2001
- Erica Jennings “Coming Home for Christmas” concert televised on Christmas Eve and New Years 2002