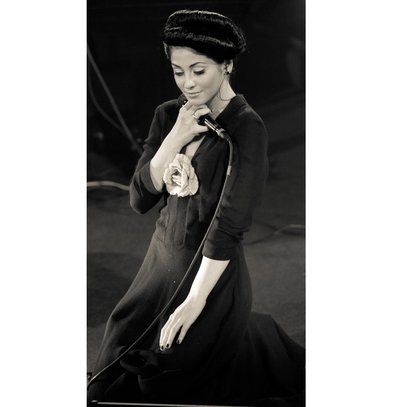 By far the most well-known Georgian currently living in Lithuania, Shorena Janiashvili was already active in the entertainment industry in her homeland before she moved to Vilnius in 2008. Her talent and passion for the stage were quickly noticed by Lithuanian TV producers. Shorena took part in several TV competitions, winning the Lithuanian version of Dancing with the Stars. She soon moved on to deeper musical adventures. In 2012, Shorena's debut album Mano širdies muzika (Music Of My Heart) was released. This ambitious project was well received by both audiences and music business professionals, leading to shows in Lithuanian concert venues and at foreign festivals (including MIDEM and WOMEX). New arrangements of traditional Georgian songs formed the basis of this record. Both gentle and passionate, with subtle touches of world and jazz music, the repertoire was chosen by Shorena herself and recorded with a group of well-known Lithuanian jazz musicians, including the talented pianist Dmitrijus Golovanovas (who was also in charge of musical arrangements). 'Performed by us, these songs definitely sound different. We play them as we feel them – both me and the musicians. Each of us contributed something, there was a lot of improvisation going on. I consider this album to be an original work,' Shorena explained regarding how the musicians worked together. After a series of successful gigs, she spent a lot of time in her homeland, coming back to Lithuania with a bag of old Georgian records (that she found by digging around in crates at flea markets) and expanding her repertoire even more. Another set of concerts, held in 2014, featured new arrangements and some changes in sound, with an added emphasis on folklore elements and an even more passionate, fiery vocal delivery.