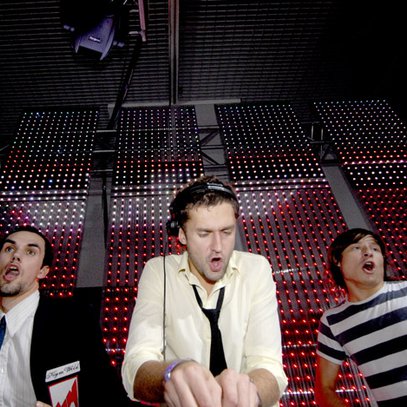 Manfredas, Kym Wild and Miss America, the three freaks comprising the Metal on Metal team, are dirty, provocative and rebellious – in short, possessing all the must-have qualities of controversial electro-rock / new wave / italo disco stars. Initially rocking the dancefloors of trendy Lithuanian clubs only with their eclectic hard-rocking DJ mixes, in 2007 Metal on Metal recorded their first track with a telling title No Front Teeth. The pumping and blaring track, perfectly conforming to the trio’s proclaimed ideology of “riot music to dance to”, has proved a hit with both the local audience and some foreign electrodisco stars. The next step was remixing tracks by heavyweight international stars like Bloc Party and Datarock, while Lithuanian clubs still host their electrified bacchanals.

This is how it happened: three dirty music junkies met at the now deceased legendary Vilnius electro club Stereo45 and, after hours of drunken talk, decided to play some records together.

After a few months the sense to it all started to emerge: "riot music to dance to". In the summer of 2004 they made their official debut as Nesakyk Mamai! DJs (eng. Don't Tell Ya Mom), and since then they made quite a few things to be proud of.

The three DJs almost always end their sets when forced by security, scream like being stabbed, get naked and dance while playing endlessly, because, in their own words, it's the soundtrack of their lives.

It paid off more then needed: after playing together for only one year, NM! were given an Awkward DJ Team Of The Year title in the influential ORE portal's survey. They also played with such big shots as Gus Gus, Zombie Nation, Andrew Weatherall, Carl Craig, Westbam, etc. etc.

After bragging for years about how good they are, they finally shut up in autumn 2006 and produced their first real tune titled No Front Teeth, which, to their amazement, was greeted with handclaps and shout-outs.

Mixing all the ingredients of music genres that don't mix and being very offensive with stereo systems, NM! are the first from the Baltic electro scene to try to break it to the wider ears in the world. And maybe that's why they drink so much milk & work out for 20 hrs a day - to be in good shape when the bookings fly in.