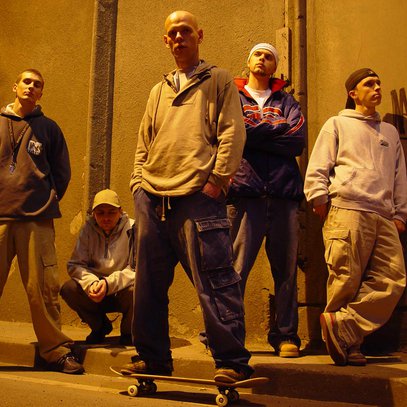 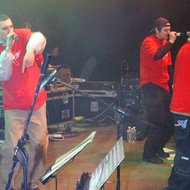 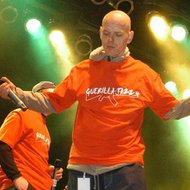 G&G Sindikatas is the flagship of the Lithuanian hip-hop community. Provocative, innovative and instantly influential, the band has been around for almost decade and a half, making it from dark basements to filled stadium shows. Consisting of 3 MC's (Svaras, Pushaz and Kastetas), three-times Lithuanian DMC champion DJ Mamania and producer Donciavas (who produces instrumentals for most of the Lithuanian hip-hop artists), G&G Sindikatas have released 4 official albums and 1 underground EP to date. The total sales of these records are quite impressive for a country of three millions. G&G Sindikatas’ intelligent rhymes, infused with social activist stances, explore the hardest and the realest. There are no bling-bling fakes in their music, and it grabs you by the throat without compromise, stimulating true unity. This attitude convinces not only the underground folks: in the popular music awards hosted by Radiocentras, one of Lithuania’s major radio stations, G&G Sindikatas were titled the best urban music act of 2008.

G&G Sindikatas have been a part of the Lithuanian hip-hop scene for 11 years already. In the very beginning, the band consisted of 2 MC's (Svaras & Giga) laying rhymes down on the music produced by Exem, the well-known Lithuanian electronic music project. The band gave occasional live and radio performances. A collaboration track with the punk band "Turboreanimacija" even managed to reach No. 1 in the charts of a then-popular independent radio station.

Svaras was in search of a DJ to provide scratching tricks during live performances. Soon he got to know DJ Mamania, who from that point on became permanently associated with the group. It wasn’t long before the first official full-length by G&G Sindikatas was ready for release. Titled “Tavo sielos vagiz” (Your Soul’s Thief), it was released by the independent label Guru Records and appeared in the stores right before Christmas 1999. The 500 units that were made sold out quickly.

One and a half year later, G&G was signed by Bomba, a Lithuanian major label. In June 2001, "Gatves lyga" (The Street League), the group’s second album, was released. It took a mere month before it went gold, selling 10 000 copies. At that point, MC Pushaz joined the forces and started performing together with G&G. In one year, G&G Sindikatas became a five-piece band.

In the same year, G&G won the Best Debut nominations in two Lithuanian music awards (Radiocentras and Bravo). Right after that came their third album, "Betono Sakmės" (Stories of Concrete), taking less than a month to go gold. In October 2002, G&G started its first Lithuanian tour, giving 20 concerts in various cities and towns.

2002 was the year when G&G Sindikatas started participating in more diverse and genre-crossing collaborations. Famous Lithuanian composer Linas Rimša invited G&G to take part in two of his projects: Opera in da House and Guerilla Jazz.lt, in which famous Lithuanian jazz musicians took part as well. The imaginative fusion of jazz and hip-hop led the Guerilla Jazz.lt project to be included in the line-up of the international jazz festival Kaunas Jazz 2003.

At the moment, G&G Sindikatas are working on a new album. A DVD featuring best live performances of G&G is released, while Mamania and Svaras, joined by DJ Mantini, continue producing their regular Gatvės Lyga radio shows that were recently brought back to life.