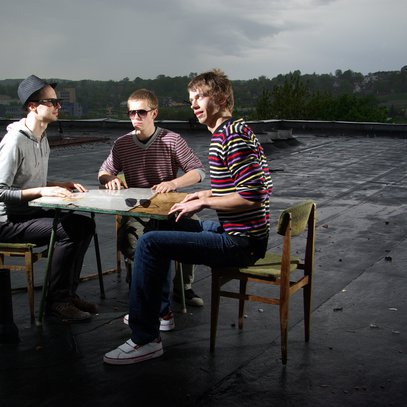 ‘We just play the kind of music that gives us pleasure. Simple as that’. That's the way Freaks On Floor describe their style. Influenced by both funk and indie rock, this trio of young musicians formed during the summer of 2007. Eight months later, it smashed the competitors during Eurorock contest – a victory which gave Freaks On Floor a chance to take part in seminars and play gigs in England, France and Germany. Building a solid profile on live circuit, the band took part in Lithuania's (then) biggest rock festival Be2gether and toured with TWNKL – a side project of popular band InCulto. Hard work paid off – first months of 2009 brought the band an influential Pravda award (Newcomers of the Year). 2010 saw the release of well-received debut album Freaky Wonder. A sophomore album Hello Girls! Dropped in late 2011, earning praise and accolades – including Best Rock Act prize at Lithuanian music awards M.A.M.A. (won by Freaks On Floor two years in a row) and . A hiatus of sorts saw lead singer Justinas Jarutis dabbling in side projects (including Lipstick For Men formed with Snorre Bergerud of Rasabasa fame).  However, Freaks On Floor reconvened in the studio in 2014 and the band's third album is definitely on the cards.  ‘We just don't belong to one genre or another. Anything goes – we aim for the best party music possible’, the band claims. On the evidence of Freaks' growing fanbase, these guys must be doing something right.

Symphony About A Good Man