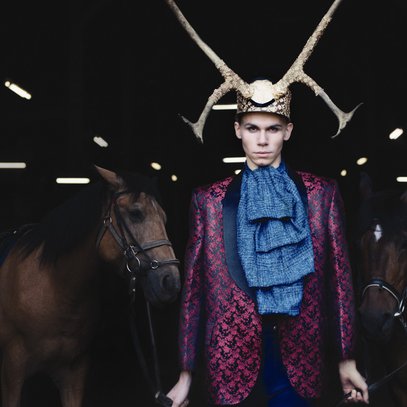 Beissoul is already a pretty well-known name for quite a few Lithuanians who love their electronic pop with a twist. A couple of years back, Beissoul (the name means “bass soul”, the way it is phonetically transcribed into Lithuanian) left the audience of a popular TV show stunned – there were immediately discussions about his vocal delivery. “Close your eyes and you'll think what you hear is a soulful black singer” was a comment one music critic made. “Not a trick or demanding vocal exercise, that's just what my voice is”, Beissoul (who has Ukrainian roots) stated numerous times. However, unusual voice is just a part of his appeal. Having studied pantomime, Beissoul delivers impressive dance moves on stage (and manages not to miss a note while doing so), loves to wear interesting clothes and headgear for his concerts and photo shoots (“It's better to be absolutely ridiculous than absolutely boring” is the kind of stuff he likes to post on Facebook) and makes sure his tracks are accompanied by suitably haunting videos. In other words, this is not your typical manufactured pop fare. It actually even works in less conventional event spaces – like a church in Vilnius, where Beissoul and co held their own show with massive success. Together with his long-term partner in crime, electronic wizard Einius, Beissoul released the duo's debut album Laikas Paikas (Stupid Time is a loose translation) in March 2014 – it was launched at Tallinn Music Week festival as opposed to the duo's home turf which is another proof of these musicians' unorthodox thinking. Ranging from energetic to melancholic and plain weird, the duo's tracks have already attracted a lot of attention on the internet, went up radio charts, got them booked for gigs in England, Georgia, Ukraine, brought support slots for the likes of When Saints Go Machine.