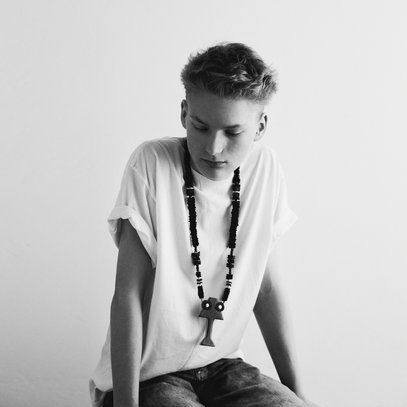 „I create my music in quite unusual way. The lyrics often do not have clear coherence, thematical threads abruptly come to a halt and make way for something totally different. It takes several listens to understand the lyrics or put them into context. That's why ba. is something that's easy to memorize, yet difficult to understand“. That's how Benas Aleksandravičius, a pale-faced 18-year-old mastermind of ba. (it's his initials, obviously) describes his work. Singing exclusively in Lithuanian, he emerged as if out of nowhere in the beginning of 2013 – and started posting videos that quickly went viral, beating the biggest Lithuanian pop stars at the game of clicks. People took notice – ba. quickly became a much talked-about musician yet remains a bit enigmatic: “I'd rather let the music speak for itself than try to gain publicity by discussing my personality”. Raktas (The Key) EP, released in summer of 2013, introduced a band whose passion for melodic indie rock is enhanced by electronic sounds – in a highly satisfying manner. ba. quickly earned a reputation of talented live performer with self confidence that's not usually associated with people who still need their parents' permission to go on tour.  2014 brought new levels of success – with second EP Namai (Home), well-received performance at M.A.M.A. (Lithuanian music awards ceremony), main prize at Lithuanian music videos competition Klipvid (for the video Sugebėt pasikeist) and weekly Red Rose Radio show where Benas now spins his favourite indie tunes on Lithuania's hippest radio station LRT Opus. The hype, it seems, is fully deserved – he's truly a talent to keep an eye on.