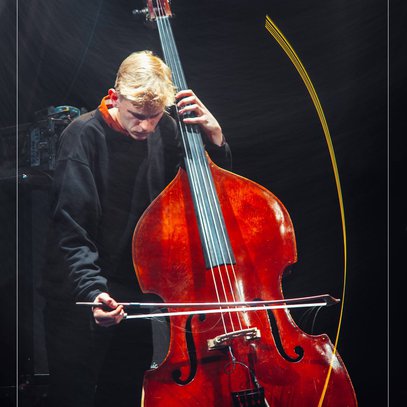 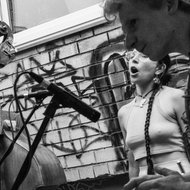 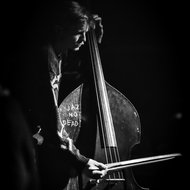 Young double-bassists sometimes dream of playing like Charles Mingus, Ray Brown or Barry Guy immediately after entering the jazz scene. Aurelijus Užameckis (b. 1995) has so far resisted the temptation to see himself as a fully accomplished artist and is keen to work outside the comfort zone by exploring the paths he considers novel. After finishing the music school, he has relentlessly made attempts to cross the boundaries of classical tradition through his interest in improvisation and jazz, which has helped him to discover his own attitudes to music. Eager to avoid standard concepts in every genre, he also aims at inventing his distinct methods in composition, primarily through particular attention to the dialogue between the sound and his inner self. For him, that all-important dialogue emerges primarily through delving into acoustic and emotional qualities. Quite similarly to Luke Stewart, the Washington-based multi-instrumentalist and experimenter, Užameckis adheres to the kind of philosophy in music that underlines inventiveness on the stage and in the recording studio rather than strict adherence to the initial score.

Born into a family of musicians, Aurelijus Užameckis almost had no other option than taking violin lessons in his native Kaunas since a tender age. The violin did not stick, though, posing a dilemma of whether to try a different instrument or to abandon music altogether. At the age of fifteen, he opted for double-bass.

This soon proved an entirely different story and, while still a student of the Juozas Naujalis Music School, he started playing solo with different orchestras and has won prizes at several domestic and international competitions. On the other hand, he realised he needed to find a space for his individual ideas, partly through deviation from the classical training in music. Despite the experience he had gained, Užameckis even considered quitting music – again, as he felt the boundaries of “classicalism” were even causing him psychological problems. Soon, however, he met Arnas Mikalkėnas, a renowned figure in Lithuanian jazz and improvised music, and the acquaintance proved crucial for Užameckis whose artistic potential has since flourished within the space of improvisation and jazz. Moreover, he started jazz studies in Vilnius and later travelled to Copenhagen where he received a degree in music performance and composition.

His artistic career has since developed between Denmark and Lithuania. An active participant of musical projects in both countries and beyond, he now considers himself a member of the wider European scene of avant-garde music. He has played with a number of bands and ensembles, such as Džiazlaif, Say It As It Is, The Young Immigrants, Some of Us of You, and SCI Music. He has shared stage with saxophonists Lotte Anker, Liudas Mockūnas, Luka Zabric and Marcus Wärnheim; guitarists Juozas Milašius and Hein Westgaard; trumpetist Erik Kimestad; pianist Margaux Oswald; drummers Kresten Osgood and Ivar Asheim; and flutist Flavia Huarachi.

A supervisor of the independent label, CRRNT Records, and a concert manager active both in Lithuania and Denmark, he also has taken part in collaborative projects involving cinema, theatre, and performance art.

The year 2021 saw the release of his debut solo album recorded inside the Bronshøj Vandtårn, the abandoned 34-metre-tall concrete water tower in Copenhagen. For many listeners, the recording turns into a riddle as they keep wondering, whether the instrument they hear is actually a double-bass. Through innovative compositional techniques and subtle relationship with the unconventional space, Užameckis has produced what may be termed a remarkable sonic experience of the drone/ambient aesthetics. The album has underlined his creative potential through artistic sensitivity and the aspiration to broaden the acoustic boundaries of his instrument.

An innovative and curious musician, Užameckis also demonstrates remarkable technical skills. He considers acoustic sound the key area of his interest in music. His compositions, however, often become more striking than even the soundscapes built with the help of electronics and state-of-the-art effects, primarily due to his clever use of the extended playing techniques and the involvement of readymade objects in his music-making. Sometimes his pieces resemble a hurricane, while on other occasions they turn into a delicate play of sounds in which the subtle dialogue between the strings and the bow eventually leaves the listener submerged in the sea of serenity.