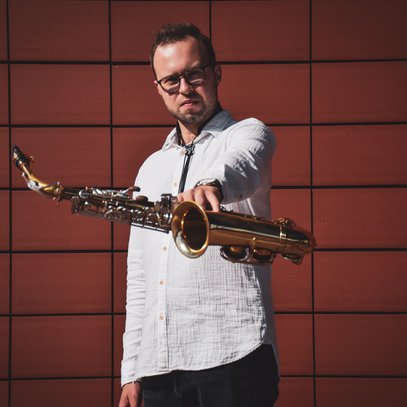 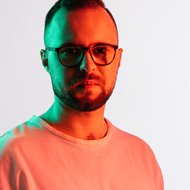 For the saxophonist Karolis Šarkus, the early experiences in classical music have eventually led him into the world of jazz. His in-depth knowledge of the vocabulary of traditional jazz goes side by side with his obvious love and respect for this type of music, yet simple imitation – however perfect – of the canonical soundsets forged many decades ago is not exactly the goal he wants to pursue. On the contrary, he willingly experiments with the sound of his saxophone by employing both acoustic and electronic methods and adopting the influences pertinent to other genres. Šarkus plays a well-balanced type of fusion jazz full of colourful melodic lines and passion. It mixes up the funky groove, the energy of rock music, the contemplative features of Scandinavian jazz and the delicate echoes of its Lithuanian counterpart, as well as the Lithuanian folk tradition.

Traditional is the simplest word to describe Karolis Šarkus’s introduction to music. Born into the family of musicians, he entered in 2004 the Balys Dvarionas Music School in Vilnius where he studied classical saxophone for almost ten years, his teacher being Albinas Guželis. After 2012, when Vytautas Labutis, one of the nation’s most celebrated jazz saxophonists, joined the school, Šarkus started attending his classes and found himself delving into jazz. When it came to choosing between classical music and jazz, Šarkus opted for the latter and went to the Netherlands to study jazz saxophone at the Conservatoire of Amsterdam (2016–2020) with Jasper Blom, Simon Rigter, Albert Beltman, and Marc Scholten. He also travelled to the United States to spend a semester (2019–2020) at the Boyer College of Music and Dance, his tutors being Dick Oatts, Norman David, Bruce Barth, and Terell Stafford. Currently he continues his Master’s at the Conservatoire of Amsterdam.

A keen participant of various musical projects in Lithuania and beyond, Šarkus, together with another young Lithuanian saxophonist, Donatas Petreikis, has set the Collaborative Jazz Septet, the band dedicated to traditional jazz. He is also the leader of the Karolis Šarkus Quintet and has worked with several other ensembles, such as Brave Noises, the Enea Besana Band, and the Kotryna Juodzevičiūtė Collective. His stage partners include pianist Stefano Bollani, saxophonists Stefano di Battista and David Linx, as well as the Son Swagga band and Amstel Bigband.

His debut album, Palette of Feelings, was released in 2021 and showcases his interest in modern jazz. Šarkus recorded it together with his friends, the students of the Conservatoire of Amsterdam. In terms of stylistic influences, the album owes to a number of types of music, from funk and rock to the Scandinavian-style jazz. On the other hand, it displays Šarkus’s inclination toward melody and harmony in composition.

In 2014 he received a grant to study at the world-famous Berklee College of Music in Boston, while in 2021 he won a prize at Premio Internazionale Massimo Urbani, Italy’s top competition for solo performers in jazz. Already well acquainted with traditional jazz, Šarkus lists Robert Glasper, Christian Scott, Theo Croker, Chick Corea, Herbie Hancock, Snarky Puppy, Chris Dave and other greats among his most powerful influences.

So far, Šarkus has been successful in striking a fine balance between the retro jazz with its classical set of sounds, and the whirlpools of free jazz that so often consume young musicians in Lithuania. He seeks for the means that help him add new qualities, such as non-conventional instrumentations, to the legacy of traditional and fusion jazz. On the other hand, he wants to bring more Lithuanian feel into the global treasury of jazz music.