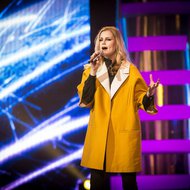 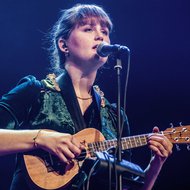 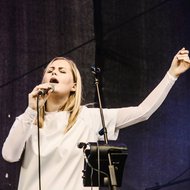 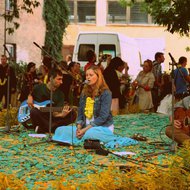 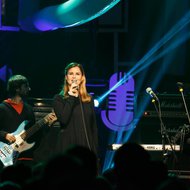 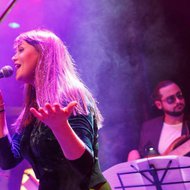 The voice is usually a decisive attribute for a singer, but the artistic uniqueness of Vytautė Pupšytė would be revealed, without doubt, even if she did not have that clear, strong and colorful innate instrument of hers; for, her song never begins with a vocal line, it begins with a message, an idea. In a way she is a ‘jazz bard’ who speaks lush and multistylistic languages of jazz and non-jazz, and pays much attention to poetry, which is the most important component of her songs and always comes first. Deprive her of her voice and she will recite and whisper in the billows of gripping music and will be no less convincing or amazing.

For Vytautė Pupšytė (b. 1987) singing was not something she could stay away from, even if she wanted to. Born into the family of musicians she spent much of her childhood in the coulisses of the Klaipėda State Music Theatre. It was where the dream of becoming an opera singer was born and in 1994 in pursuit of her goal she joined the choral conducting class at Eduardas Balsys Gymnasium of Arts where she studied with Zita Kariniauskienė. Soon however her efforts to master the art of classical singing were hindered by an unexpected obstacle – an encounter with the recordings of Ella Fitzgerald. They unearthed a different, parallel vocal universe. Initial infatuation grew into love and commitment and in the years between 2006 and 2012 Vytautė took up studies at the Jazz Department of Lithuanian Academy of Music and Theatre, where she studied Jazz Voice (B.A.) as well as Pedagogy and Performing Arts (M.A.) with Dmitrij Golovanov.

From the beginning Vytautė successfully combined her studies with a performing career; since 2007 her name was being featured in the programs of clubs and festivals. Her first stage appearances were with the Ella Fitzgerald Tunes, a project by Andrej Polevikov that made it to the jazz festival in Bornholm, Denmark, and her own initiative Tribute to Nina Simone, that enjoyed popularity for many years.

There is no jazz singer in the world that could deny the legacy and greatness of Ella Fitzgerald and Nina Simone, the two prima donnas of different epochs. The first woman inspires to nurture the voice, to never spare energy, showcase emotions and seek virtuosity. The second teaches to sing sensibly and that every song is a small (and sometimes an immense) drama, and that living through it is much more important than the sweetness and beauty of the tune. Vytautė Pupšytė has wholeheartedly absorbed these lessons and in the projects paying homage to these divas she captured the essence of both.

Nevertheless, despite her fondness of the traditional jazz repertoire that she so skillfully performed, it never became her leading trademark. Original compositions turned out to be her true calling. The setlist of her first band Jing’a’ling was entirely made of original music. It was novel, bold and not exactly conforming to the jazz aesthetic. In 2010 the band won the Tamsta Music Club competition Garažas, and soon after played at the Vilnius Mama Jazz and Kaunas Jazz festivals, followed by the tour to Russia, Latvia and France.

In 2011 she took another important trip to Denmark. Together with a trumpeter Mindaugas Vadoklis she joined a Danish band Lada de Lux and got a little taste of the international collaboration. During her last year of studies Pupšytė experimented with yet another music genre – a vocal jazz ensemble. Despite being formed for academic purposes, an all-girl band Singaz left the classroom to participate at the Vilnius Jazz Young Power. They won the Grand Prix and a special prize for Vytautė Pupšytė’s original composition Human Language, all of which was followed by the triumphant performance at the Birštonas Jazz Festival. In 2014 Singaz collected yet another trophy – a second prize at the Riga Jazz Stage Contest.

Currently Vytautė Pupšytė is justifiably referred to as one of the most interesting Lithuanian singers-songwriters. She is concurrently involved in a couple of intriguing projects. Soul Moustache is a nationally recognized family duet with Vytis Smolskas, heard on LRT Opus Radio and making TV appearances. The band Nimai created with Laimonas Jančas and Paulius Adomėnas please the listeners with exotic melodies, Sanskrit texts, as well as Indian modes and instruments. Another experimental project called Leobard Grey had a successful premiere at the Birštonas Jazz Festival prior to falling apart due to the tragic death of one of the members, Tomas Dobrovolskis. It is only appropriate to put a comma here in an anticipation of all Vytautė’s imminent ‘song-deeds’ and future discographies.