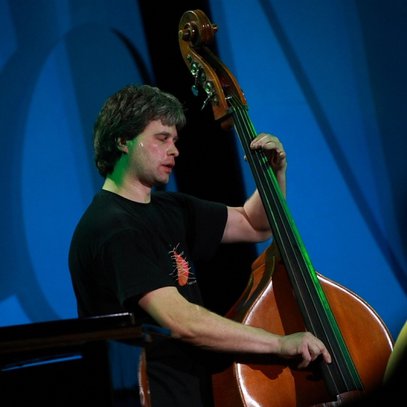 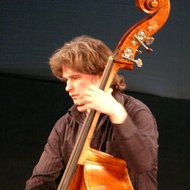 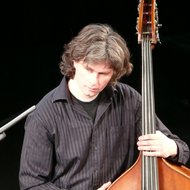 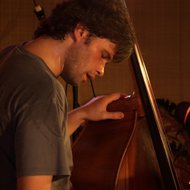 An influential figure among Lithuanian jazz musicians, double bassist Vytis Nivinskas demonstrates mature musical thinking, rich and expressive sound, vivid and active articulation, flexible and tuneful melodic lines. He developed an interest in music rather late. Fascinated with jazz he traded studies of philosophy at Vilnius University for double bass. Emerging on jazz stage in 1994, the bassist has not take long to acquire a solid experience as he played with leading Lithuanian jazz musicians, participated in numerous jazz, rock, classical and contemporary music projects. Vytis Nivinskas is a creative personality who has initiated such exclusive projects as “Coltrane Impressions” (2000, his debut as band leader) and an international group “Baltic Asteroids” where he played during his studies in the USA and revealed himself as a composer. Recently he is performing with the groups “Saga” and “Riot”, composing and teaching.

A Wife, a Goddess

X
A Wife, a Goddess

Born and raised in Vilnius, he developed an interest in music rather late, at the age of 14 when he began playing guitar. Fascinated with jazz he traded studies of philosophy at Vilnius University for double bass. He studied music at Vilnius Conservatory, Lithuanian Academy of Music, Carl Nielsen Academy of Music in Denmark and received his master's degree from DePaul University in Chicago.

Emerging on jazz stage in 1994, the bassist has not taken long to acquire a solid experience as he played with the bands led by Vladimir Chekasin, Oleg Molokoyedov, Artūras Anusauskas, with saxophonist Jan Maksimowicz and others. He has participated in numerous jazz, rock, classical and contemporary music projects. At the 2000 Vilnius Jazz Festival he made a debut as a leader with his project "Coltrane Impressions".

In 2001 he left for the USA to study. In 2003 in Chicago he co-founded, together with saxophonist Rimvydas Paulikas, an international trio, Baltic Asteroids, which soon evolved into a quintet (with drummer Brahm Fetterman, saxophonist Paul Hartsaw and trumpeter Tobias Kaemmerer). The group played only original compositions and Vytis Nivinskas revealed himself as a composer. The Baltic Asteroids played in Chicago, New York, Washington and other American cities. They have also been featured in the Lithuanian Vilnius and Birštonas jazz festivals. Nivinskas has also performed with the Trapeze Unit, Outside In Trio (with Nob Stowe and Dan Bales), Baked Beans (leader Jim Donovan), Matt Russell Band and others. He has collaborated with the famous Chicago avant-garde musicians Bill Brimfield, Jim Baker and William Perry (Healing Force). After completing his studies, he moved to New York where he played with Lawrence 'Butch' Morris, Kenny Wollesen, Toshi Makihara and Dalius Naujokaitis.

Since 2005 Vytis Nivinskas is on the faculties of Vilnius College and Lithuanian Academy of Music and Theatre.