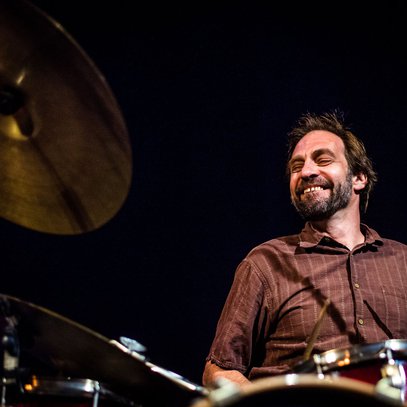 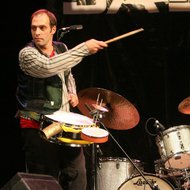 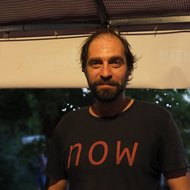 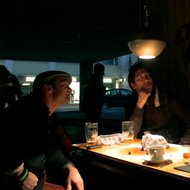 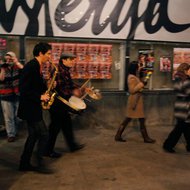 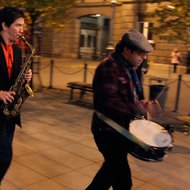 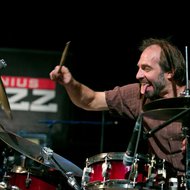 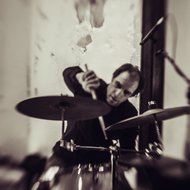 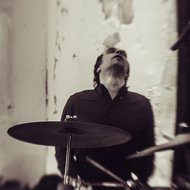 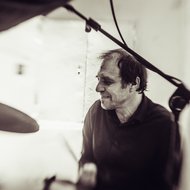 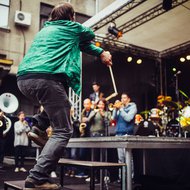 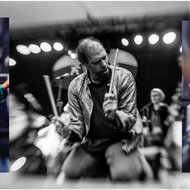 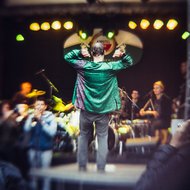 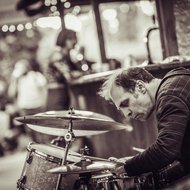 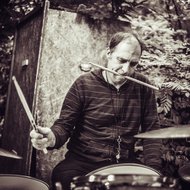 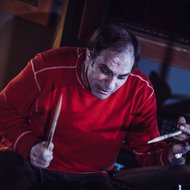 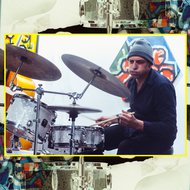 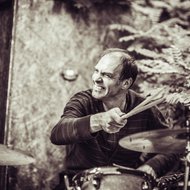 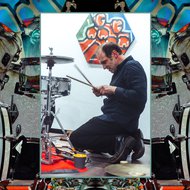 Dalius Naujo is a genius percussionist who has lately moved into conducting and composing. He is not normal! He is totally pocessed by his art, nothing else matters to him! The muses of music have made him lose his mind, he is moving ahead unpredictably and dangerously, as all poets do.“ – Jonas Mekas (jonasmekas.com)

A pilgrim of the avant-garde experimental music and free jazz scene ,currently based in New York, Dalius Naujokaitis-Naujo started his musical career in Lithuania and regularly returns for various projects. He is a free musician playing free music, devoid of musical clichés and stylistic boundaries, disregarding traditional means of sound production and customary creative forms. This creator and performer, distinguished by his extraordinary expressiveness, finds music everywhere, from the sounds of nature to the hum of cities. And in his hands very diverse objects – dishes, handrails, saws – turn into musical instruments. Bursting with vital energy, Naujokaitis values spontaneous music making very highly, participating with great passion in various performances, including many initiated by him.

Dalius Naujokaitis was born in Vilnius. Because first drumming lessons given by his older brother Audrius he began to take an interest in drums at an early age, and later he studied in Vladimir Chekasins band class and in 1987  graduated from the Vilnius Conservatoire in Arvydas Vainius’ percussion class.

In 1995 Naujokaitis moved to New York and, after giving a series of solo performances at the Anthology Film Archives, he joined the city’s growing ranks of creative improvisers. In cooperation with other artists he founded the band Free Music on Second Street in the Anthology Film Archives (Eugenijus Varkalis, Julius Ziz, Audrius Naujokaitis). He also had a close creative relationship with the Lithuanian-American poet, film maker Jonas Mekas. Naujokaitis’ music can be heard in Mekas’s films “Happy Birthday To John Lennon”, “On My Way To Fujijama I Saw” and “This Side Of Paradise”.

Sutartinės, a genre of traditional Lithuanian polyphonic music, occupies a special place in Naujokaitis’s work. This genre forms the basis of the music "Untyte", a band he founded together with the New York based artist Sandra Koponen in 2008. In 2012, Naujokaitis together with Kenny Wollesen and Jonathon Haffner initiated the ongoing “Rasa Rasa” project, culminating in the recording of “Wollesen, Haffner, & Naujo: Rasa, Rasa”, which was released in 2014 by John Zorn’s legendary Tzadik label in its Spectrum series. Recorded with other creators of new improvisational music and with traditional performers from Lithuania, the album consists of ancient Lithuanian sutartinės embellished with touches of modern music.

2010-2013 With Kenny Wollesen, Jonathon Haffner, Sean Francis Conway and a number of talented young Lithuanian artists, he held a series of weekly concerts in Vilnius and Kaunas as part of the “Ministry of Fluxus” public art project.

Naujokaitis is also active in the film and theatre scene. In 1995 Together with Ken Jacobs created the film-music project “Lumiere/Naujokaitis/Jacobs “Nervous System Concerts” and collaborated with the contemporary dance groups “Limbic Six” and “Tiny Mythic Theatre”. He has directed two films; “The Door” (2011) and “Notes for ‘The Conducting Machine’” (2012). Both of these films were designed as scores for his musical composition “The Conducting Machine” (which was performed with the participation of Dalius’s mother, who played the knitting machine). In 2015 he and New York artist  Aidas Bareikis formed sound and performance band Reflux .

In 2016, 2017 Together with Laima Griciute and Raimondas Pranka he made a program and organized International Peronas Jazz Festival In Vilnius.

Uzupis is a band with Kenny Wollesen on vibraphone, Will Shore on electric vibraphone and Dalius Naujo on drums, electric drums & vocals. The band was formed in New York City in 2014 at one of song-writer Jesse Harris’ infamous house parties in Soho. Uzupis has since performed in many of New York’s best underground clubs: Nublu, Manhanttan Inn, The Stone, and Trans-Pecos, Bar Lunnatico and they were featured at the 2017 Peronas Jazz Festival in Vilnius.

Recently, Uzupis was honored to perform at the birthday party of highly influential filmmaker Jonas Mekas at the Agnes B. performance space in NYC. The 95 year old Mekas is a huge inspiration to the band and sometimes sings with the group.

Before forming Uzupis, Kenny, Will & Dalius had played for many years together, honing their musical skills in a variety of bands, including the avant-garde marching bands Himalayas and Stone Clouds, the performance happenings of Wollesonic Labs’ “Sonic Massages” and many of Butch Morris’ ensembles, where they learned the art of “Conduction” from the master himself.

The sound of Uzupis is unique and fertile and other-worldly, yet at the same time accessible, earthy and fresh. Much like the the band’s namesake: the city/state of Uzupis in Vilnius, Lithuiania.https://uzupis.bandcamp.com/

In the winter of 2020 by the invitation from Kazuhiro Kamio (Japan) he participated in Mid summer video music festival.

In January 2020 he organized three days Keep Singing music event in memoriam of Jonas Mekas, where many music groups from Lithuania took place including friends from NY Kenny Wollesen and Jonathon Haffner.

In 2019 he had a residency at Mama studios in Vilnius and made 3 nights performances with various Lithuanian musicians. The recorded album of this residency  is coming out in 2021 spring.

Album "Juozas Milasius/Dalius Naujokaitis/Tomas Kutavicius and Lithuanian young composers orchestra recorded in Willisau jazz festival in 1993" is coming out in fall of 2020 - No business records: https://nobusinessrecords.bandcamp.com/album/live-at-willisau-1993