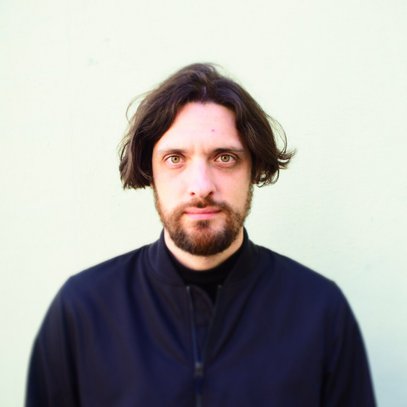 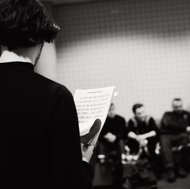 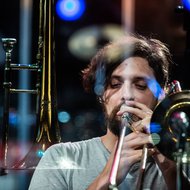 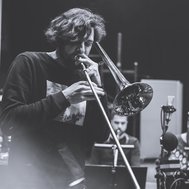 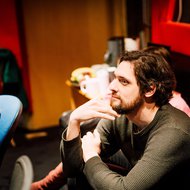 Jievaras Jasinskis, along with Skirmantas Sasnauskas, could well be called the most famous trombonist of the Lithuanian jazz scene. As a highschool student, he started playing with funk / acid jazz band Bekešo Vilkai. A talented musician, he soon began to play in many of the country’s most cutting-edge stage ensembles. Despite spending many years performing classical music, Jasinskis successfully entered the jazz scene, formed many great ensembles, participated in a number of recordings and became one of the most prominent musicians in the genre, with a clear preference for fusion jazz and masterful compositions for large-scale ensembles. Jasinskis has produced a colossal amount of work as an arranger. The number of his arranged pieces is no longer counted in the hundreds, but in the thousands. His talented hand has touched the performances of Ten Walls, Andrius Mamontovas, Linas Adomaitis and many other musicians accompanied by orchestras. His story is one of how a small cog turned into one of the most important cogs in the country’s musical machine, without which the mechanism would start to jam.

Jievaras Jasinskis (b. 1989) – trombonist, arranger and composer. He began to study the secrets of sheet music at the Balys Dvarionas Music School. From 2008–2012, he studied at the Lithuanian Academy of Music and Theatre, majoring in trombone. He later withdrew from his studies for several years, but returned to the academy in 2018 to continue his studies with a master’s in composition.

The band Bekešo Vilkai, which he formed together with friends in his mid-teens, became Jasinskis’ springboard into the world of music. The funk / acid jazz band, which has been around for a decade, has not released a single album, but has managed to earn the sympathies of local audiences and become a bright spot in the country’s musical life. Jasinskis was the main composer for Bekešo Vilkai.

The talented trombonist soon caught the attention of other bands as well. Over the course of his career, Jasinskis has played with Inculto and performed in the Eurovision Song Contest with them in 2010. He also played with Saulės Kliošas, Skamp, G&G Sindikatas and some of the other most prominent bands in the country. Jasinskis, armed with his trombone, can be seen lending a hand to many Lithuanian music groups.

Although Jasinskis was born in Vilnius, Kėdainiai town played an important role in his creative path. It was there that, in 2014, he made his debut with his band Reinless at the Broma Jazz Festival. The ensemble, bouncing between funk, soul, jazz and rock, entered the Lithuanian jazz scene like a whirlwind and managed to release two particularly well-received albums Sus Signal (2017) and 434 (2020). It was with the emergence of Reinless that Jasinskis’ rise to become a leader of jazz ensembles really began.

The connections with Kėdainiai do not end there. In the following years at the Broma Jazz Festival, Jasinskis also made his debut with the big band Lithuanian JJazz Ensemble and the monumental project Greener Grass, which combined classical, jazz and pop styles. In a sense, Kėdainiai revealed his talents as a composer who can write for large-scale ensembles and who does not shy away from crossing the borders of traditional jazz sounds. Perhaps not coincidentally, this talented musician and composer became the chief conductor and artistic director of the Kaunas Big Band in 2018.

As a jazz trombonist Jasinskis is also gradually becoming known outside Lithuania. In 2018, he participated in the international project Euroradio Jazz Orchestra where he performed solo improvisations and the first trombone parts. In 2020, he was invited to contribute to the recording session of Identities, an LP by one of the most famous Baltic big bands, the Latvian Radio Big Band.

Jasinskis demonstrates impressive workmanship in the field of arranging. He has contributed to the work of many other musicians and has helped them to create the kind of music that sends shivers down your spine. He has arranged and orchestrated over 1.500 songs for various orchestras and bands, including concert programs with Andrius Mamontovas, Ten Walls, Linas Adomaitis, Ieva Narkutė, Lilas and Innomine, G&G Sindikatas and others. Jasinskis also arranged two musicals by Kipras Mašanauskas (Barbora Radvilaitė and Mindaugas Karalius (Mindaugas the King)), Merūnas Vitulskis’ album Music for Lithuania and many works for various musical television projects.

Jasinskis works​ as a composer not only in the collectives he has formed, but also in much broader contexts. In 2016, he composed the score for the silent film Barbora Radvilaitė (dir. Josef Lejtes), which was shown as part of the audiovisual project Istorinis Kadras. He also wrote the musical drama Karalienės Mirtis (Death of the Queen) (2016, with Dorotėja Būdaitė), the musical fairy tale Džiazolendas (Jazzland) (2018, performed by Kaunas Big Band and actor Andrius Žiurauskas), a five-part work for a chamber orchestra Dedikacija Česlovui Milošui (Dedication to Czesław Miłosz) (2018), a composition for trombone and piano No One’s Suit (2018, this work was his obligatory submission for the Juozas Pakalnis International Competition of Wind and Percussion Instrumentalists) and was one of the co-authors of the sacred cycle Jazz Mass (2018). Jasinskis’ work for the symphony orchestra Change won second place and a special prize for the best Lithuanian composition in the international competition Future Symphony. In 2022 he was awarded the prize of the Vilnius Jazz festival for the merits to Lithuanian jazz.

In an interview, Jasinskis has said that he would like to try sitting in the producer’s chair in his free time. However, all his time remains dedicated to trombone, composition, and arranging, so music production stays on the sidelines. Nevertheless, the ideas born in his head are the products of a rich imagination and will surely continue to shake the established traditions of jazz.