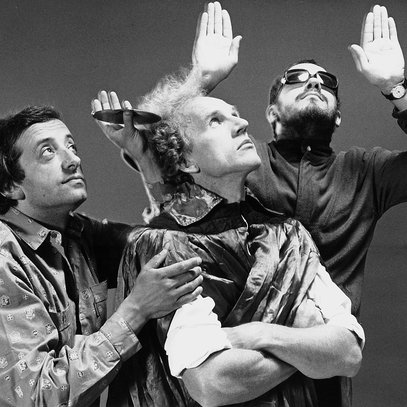 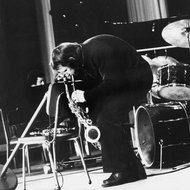 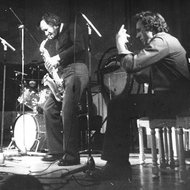 Vyacheslav Ganelin, Vladimir Tarasov and Vladimir Chekasin are the three pillars of Lithuanian jazz. The whimsy of fate brought all three Russian-born musicians to Lithuania, where they united, in 1971, to form a trio which has earned the international acclaim for Lithuanian jazz. One cannot overestimate their impact on the following generations of Lithuanian jazz musicians; their brave stylistic interplays, large-scale suites, theatrical extravagance, irony and self-irony became trademarks of the whole Lithuanian jazz school.

The GTCh Trio (Vyacheslav Ganelin, Vladimir Tarasov, Vladimir Chekasin; active in 1971-87) has earned the international acclaim for Lithuanian jazz, was the driving force in the evolution of this genre in Lithuania, and has laid the foundations for the Vilnius jazz school.

The origins of the group can be traced back to 1969 when Ganelin and Tarasov together started working on the program Opus a 2 which was premiered in Gorky and Donetsk jazz festivals in 1970. The saxophone player from Sverdlovsk Vladimir Chekasin joined the duo in 1971. Since then the Trio has been presenting a new large program each year, affirming their ambition for groundbreaking artistic explorations. The first programs - Consilium, Postludium, Ad libitum, Ex libris - made a strong impression on jazz aficionados and were ardently discussed among critics and audiences.

In 1974 the Trio was one of the first jazz groups in the former Soviet Union to be granted the residence at the State Philharmonic Society, becoming the Contemporary Chamber Music Ensemble of the Lithuanian State Philharmonic Society. This offered the Trio more possibilities to participate in festivals in Soviet Union and abroad. The musicians from Lithuania were allowed (among a very few Soviet jazz groups) to tour in Eastern and Western Europe, later in Cuba, India and the USA; their recordings were released by Polish, German, Swiss, American and British companies.

The Trio's first program developed especially for studio recording, Con anima, was recorded in Vilnius Recording Studio in 1976. In the same year, Trio participated in Jazz Jamboree festival in Poland with the program Poco a poco, receiving the highest acclaim from critics and audiences alike. Polish press wrote: "The performance of the Soviet jazz trio was the biggest surprise. It proved that we have been waiting for this trio's performance for several years not in vain. The Contemporary Chamber Music Ensemble of the Lithuanian State Philharmonic Society is one of the most fascinating groups in Europe. They play intuitive music, free jazz, grounded in traditions." (Express Wieczorny, 1976.11.03)

A blend of different styles and musical cultures, new forms, multi-instrumentalism, disclaiming the dichotomy of soloist and accompanist - all such features made the Trio's music close to early free jazz and the Art Ensemble of Chicago, it was also often compared to the compositions of Anthony Braxton.

In a conversation with the jazz critic Aleksey Batashev, Ganelin said: "We listen to all kinds of music. Event the simplest polka tune could lend a needed rhythm pattern and sound. We can not do without classical music, traditional jazz, not to speak about modern jazz and other up-to-date issues of music world." (Jazz Forum, 1973 No.5)

The programs of the Trio Album for Young People, Catalogue, Home Music Making testify to their fascination with theatrical expression and visual effects which should heighten the impact of performed music. "The model of the classical theatre is of great importance to us. Sometimes our work could be called psychological instrumental theatre." (Jazz Forum, 1973 No.5)

"Our music is polyphonic in that each of us approaches a musical idea individually. You feel when it is time to keep quiet, and when to enter. In a conversation partners feel each other. If one of us discovers an interesting idea the other two follow," said Ganelin. (Nemunas, 1978 No.8)

The second program recorded in Vilnius Recording Studio, Concerto grosso, has caused uproar in the management of Melodia company in Moscow - defying any avant-garde manifestations, the authorities were shocked by such radical musical concept. All divisions of Melodia were ordered to carefully watch the ideological and artistic aspects of recorded music. This recording was released only after three years.

At the late 70s and early 80s the Trio has toured intensively, receiving international acclaim. The German jazz critic Joachim Berendt claimed that the Trio plays "the most organised and the most professional free jazz, I have had chance to hear in many years." (Down Beat, 1980)

The Trio's work could be compared to contemporary art both in expression and general aesthetic principles. Their music is a unique artistic discovery, stemming from the musicians' versatile background, erudition, originality and mastership.

In 2017, the members of the Trio were awarded the Lithuanian National Arts and Culture Prize, the highest artistic distinction in Lithuania.