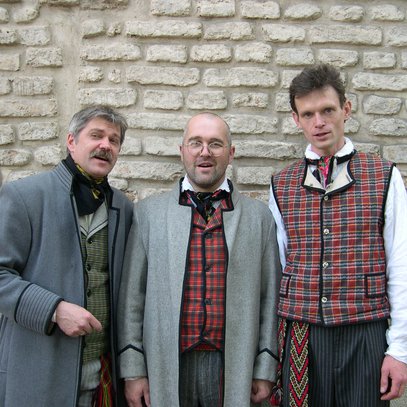 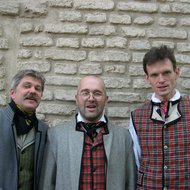 Founded in 1989 by Rytis Ambrazevičius, Intakas was quite a large band. Its constantly expanding repertoire consisted of about 300 songs and several dozens of instrumental compositions. At the beginning the band mainly performed songs collected by its members on field trips, but also songs documented in the archives and publications. The heritage of the “King of Songs” Jonas Jakubauskas from the village of Žagariai (Seinai rural district), with about 200 songs from his repertoire notated by Ambrazevičius, made a great impact on the band’s sound and style. Today’s Intakas has been reduced to a male trio (Rytis Ambrazevičius, Giedrius Šmuilaitis and Vytenis Umbrasas). Its repertoire consists of hay harvest, military-historical and other “men’s” songs performed in the traditional Lithuanian folk singing manner. However, the original Intakas continues to exist as a club – its members gather to celebrate the calendar holidays and on other occasions. The Intakas members bring their kids to the recently founded “School for Munchkins”. The leader of the band, ethnomusicologist, music psychologist and acoustician, Prof. Dr. Rytis Ambrazevičius, is a lecturer at Kaunas University of Technology and the Lithuanian Academy of Music and Theatre.