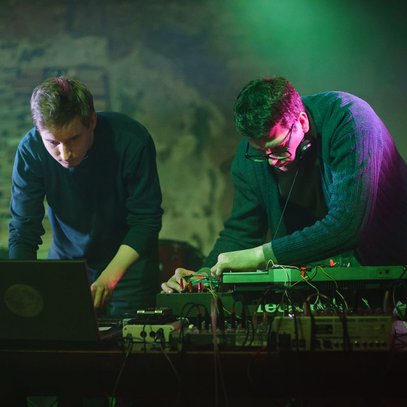 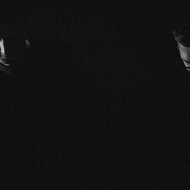 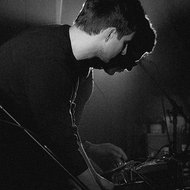 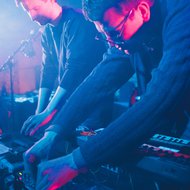 A grammatical reflex may urge you to add a dot above the last letter (the Lithuanian word tiesė means a straight line in English), yet the name of this duo is exactly what it appears here, that is without the dot. The name is apparently related to a geometrical term and is meant to ‘tease’ with its intentionally wrong spelling. The same principle can be traced in the duo’s music. Antanas Dombrovskij and Vilius Šiaulys, also known for their individual projects, show considerable bravery in employing playfulness to give the sounds they produce a shade of irony. In a semiotic sense, a straight line as a term leads to associations with prolonged chords, yet in this case that’s not entirely true. Solid massifs of abrasive noise-like sound are intersected by glitch-style convulsions or tempered by a thawing drone and ambient mass. Defragmented and unrecognizable samples of music fall apart into certain splinters in a process the levers of which are operated by improvisation. The feeling you get, however, is that of all the transformations being carefully watched over and modestly controlled. That kind of combination leads listeners into an adventurous sound experience where a solid character is in proportionate balance with the sly blink of an elemental force.

It wasn’t before 2009 that the common features began to emerge between Antanas Dombrovskij and Vilius Šiaulys as far as their sound work is concerned. The duo initially gave a number of live performances which were well received and gave a boost to their creative exercises. They first appeared on stage in 2009 during an eclectic happening called Kliedesiai (Derangements) and organised by Agharta, the organisation which positions itself  ‘on the edge between music and noise’. The duo’s debut offered the audience a treat of unexpected experience. They continued live performances including these at the opening of the Insait music club in Kaunas (2010) run by Armantas Gečiauskas, and festivals such as Summer Noise Vilnius, and Vilnius Noise Week as well as Level B events hosted by the Contemporary Arts Centre in Vilnius.

The first several shows revealed definite creative traits of each member of the duo: Šiaulys’ massive structures in cooperation with sound passages generated by Dombrovskij who employs the circuit-bending method. The latter concept defines the intentional redesign of electronic instruments to make them produce sounds as if because of a ‘technological error’. Dombrovskij, who has frequently used the technique in his solo shows, maintains that an ‘incorrect’ connection is capable of producing surprise discoveries in sound. The same is apparent in the music by Tiese as its structure always leaves some space for improvisation and the unexpected.

Although long considered as a purely live project, the duo disproved the label by releasing in 2013 their debut recording Ant širdies (On Heart) in the form of a cassette published by Terror. It includes six compositions that bring forward all the aforementioned acoustic features of Tiese which in this release, though, appear plunged into a fairly viscous facture.

This was followed by more live performances at festivals and other gatherings, including Speigas (Black Frost) in Vilnius. Anyone recently listening Tiese’s music would probably feel the convergence of two individual attitudes towards the aesthetic of sound. The result is the duo’s specific sonority that bends to sharpness and sometimes incorporates rhythmic elements. Nevertheless, even abrupt turns in sound seem to be under effective control.