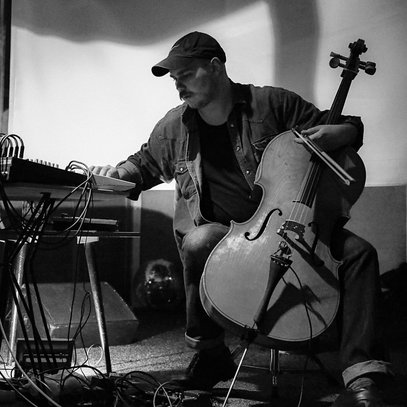 Patris’ performances are improvisations that combine the sound of classical instruments like the cello, field recordings and digital sounds. Subtle melodies and sounds are combined  multi-layered soundscapes that could be compared to impressionism. But the music made by Židelevičius started mutating recently – the organic cello-based ambience he was creating for around 10 years is sometimes being replaced by experimental electronic music. Analog and digital devices are used to create rhythms and abstract synth lines that bury the music in a pulsating chaos of warming noise. Sonata ianileve is an ambient/drone/glitch approach to the classical sonata using cello and field recordings from 2018-2019. The piece follows the standard musical structure of the 18th century sonata; the organisation of materials are presented in an exposition, elaborated and contrasted in development and then resolved in a recapitulation.

Patris found the interest in music in an early childhood. When Patris heard the Bach vinyl playing at home, he was so impressed by the cello, that he started taking cello classes and competing in the musical contests being just 5 or 6 years old. Later, Patris experimented together with Arnas Anskaitis, who was creating electronic sounds and introduced Patris to “Ableton”. That’s when artist’s cello ambient sound was born. At the beginning it was just primitive recordings at home. Later on he got an offer to join Alina Orlova’s band and was performing in various cities like Kaunas, Vilnius, Klaipėda, Saint Petersburg, Jekaterinburg, Moscow, Lyon, Paris and Kirkenes. Meanwhile, Patris also performed solo in various festivals, unusual places in Kaunas. Eventually, he got his first rhythmic machine “Roland TR-626”. This is how Patris started adding abstarct rythms with lots of delay and reverb to the ambient performances. Patris’ current musical style can be called experimental acid techno.