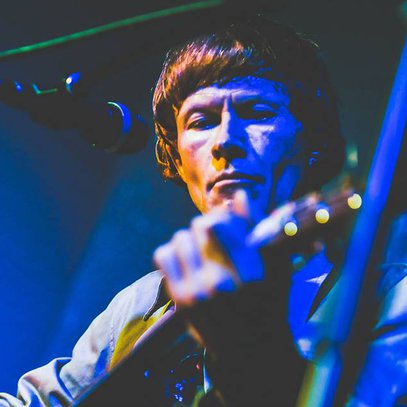 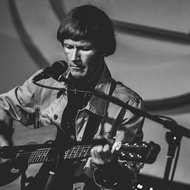 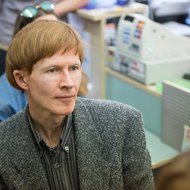 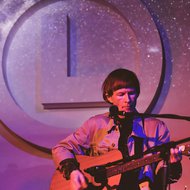 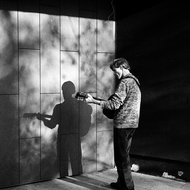 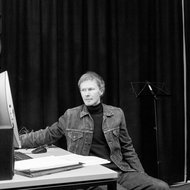 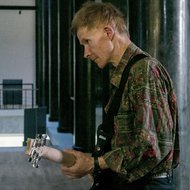 Lukas Devita’s music reaches for the same boundless spaces that engage him as an author. They accommodate gusts of warm hippie worldview from the fifties and sixties, folk and blues inspired guitar chords, and psychedelic aesthetic which unfolds in scintillating colours and flutters in all the sounds Devita produces. Take a step beyond them and you might find yourself in the space of perpetual presentiment of spiritual experiences, cosmic mysteries and transcendental journey. Although with unforeseeable irregularity, Devita takes part in chamber events and has recently favoured more intimate performances. Usually they are dominated by guitar music that carries certain features of the old blues/acid rock or psych folk coloured by ephemeral vocals and supplemented with atmospheric sounds. Devita is one of very few or perhaps the only one creator of psychedelic music in Lithuania. His soundscapes may be rather varied yet the sense of float and drift transfuses all of his music. It is no fallacy to say that his works occasionally feature the aesthetic of ambient and space music. Devita has not tried to reject the influence of any of these styles yet he sees his ultimate goal in music as that of  ‘carrying listeners over oceans’.

Lukas Devita - Everyone Is A Child (V-2 Mix)

Lukas Devita (born Vytautas Vilimas) took his first steps in music as member of Dinda Polimantika, a band that, according to different sources, was established between 1985 and 1988. The group stayed together until 1992 being the first in Lithuania to proclaim its commitment to psychedelic rock. The band has not released a single record yet searching the Internet might yield an opportunity to hear several of its tracks evidently influenced by blues. As the group dissolved, Devita embraced a solo career the activity curve of which started ascending in 1998, after his first performance at Vytautas Magnus University in Kaunas which hosted concerts of experimental music organised by its aficionado, Raimundas Eimontas.

Apart from music, Devita is a prolific publicist interested in a broad range of topics, from history of music and culture (e. g. the birth of punk music in Lithuania) to supernatural and paranormal phenomena. His literary science fiction is worth mention too, such as Iki ir po sapno (Before and After the Dream), a short story listed among the best pieces of Lithuanian fantasy literature in 1997. His sets of literary interest do sometimes echo in his music too its ‘themes’ pendulating from ufology and interpretations of anomalous experiences to spiritual practices and philosophical categories assessing our world. His stylistic features diffuse over different genres, from sung poetry to acoustic avant-garde. His sound, however, always carries a common denominator that can be described as spacious and atmospheric.

His series of live performances were followed by Astralia, the recordings he made 1998 in a cafeteria of Vytautas Magnus University. Much later, in 2006, they were remixed and released as CD-Rs by Dream Records, a virtually unknown label that was most likely Devita’s home studio. The recording features experimental psychedelic music dominated by floating synthesised passages, meditative spirit and somewhat ambient soundscapes. In terms of sound aesthetic, it correlates with the ‘cosmic’ music of the nineties and occasionally features chords characteristic of krautrock (the aforementioned Raimundas Eimontas took part in the remastering of the recording).

One year later, in 2007, Devita released his second home-made album, Library Tapes, the title being an allusion to the several years he spent working at the National Library of Lithuania. Stylistically the recording is somewhat reminiscent of Astralia, yet its soundset is slightly coarser and tinged with lo-fi / psych. That’s mostly due to the fact that Devita used a distinctive instrument to record that particular album, the Soviet-made Polivoks synthesiser the specific sound of which calls for the use of the ‘cryptomusic’ epithet. In 2008, his principal sources of inspiration almost unchanged, Devita recorded Space Duty, an album that reveals a strong emphasis on cosmic ideas and employs signals produced by bodies inside the Solar system captured by the NASA Mission Control Centre.

Meanwhile, Devita continued his literary work and published a number of articles alongside his first book, Garso gėlės (Flowers of Sound, 2012). The latter represents ‘a kaleidoscope of hippie music and free studies in arts’, according to the author. And here is a quote from an annotation by the publisher: ‘The book describes early psychedelic rock music in America and Britain, the hippie movement and their reflections in subsequent cultural development’.

Culturological research has never hampered Devita’s musical aspirations. In 2013 he recorded an audio cassette, a split which also features compositions by Sleepyard, a duo of brothers from Norway. The cassette was released by Agharta Tapes founded by a multifarious activist of ‘bizarre’ music, Armantas Gečiauskas. The recording is to some extent retrospective as long as Devita’s music is concerned as it witnesses the various forms of sound he had explored. In addition to that, Oliver Kersbergen, the founder of Sleepyard, remixed and provided a creative extension to several of Devita’s compositions from his Library Tapes. They eventually appeared in Kersbergen’s album Wall of Confusion the shortened version of which was included in the split cassette.

In the end of 2017 Devita revived "Intuityvios muzikos studija” (“Studio of intuitive music”) music space in National library of Lithuania. During the event he met an artist Avidja and created ambient music project avidja/devita.

Since October of 2018, Devita has been hosting a radio show in LRT “Classics” program called “Sound flowers”, in which he introduces music as well as has conversations on various topics.