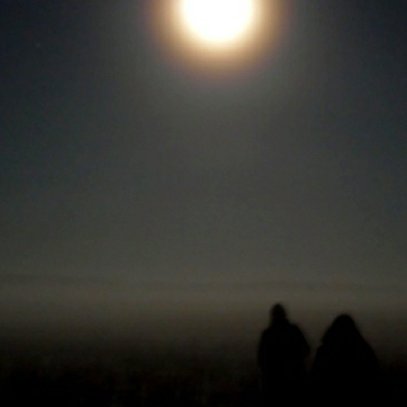 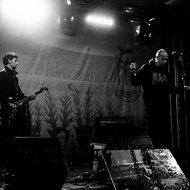 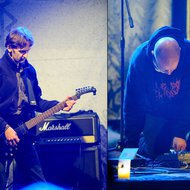 The duo Budrūs (The Alert) comprises two individuals well known among those familiar with the Lithuanian underground music. The blacksmith of soundscapes is Laurynas Jukonis who has been nurturing his personal project, Girnų Giesmės (Chants of Quern), for the last several years. Leonardas Marozas sows gravel of words across landscapes that never sleep; he is responsible for promoting noise and other music styles of comparable coarseness in Lithuania. The duo weaves its sounds into weird apocalyptic visions by sharpening drone chords with all-embracing rumble of guitars. Rising above that flow is a forceful voice that reads visionary lyrics or blows them up with unrestrained cries. The texts themselves are stimulated by individual rituals, substances or particular physical conditions. Some have tried to describe the duo’s music as that influenced by post-black metal and power electronics. The sonoric end result, however, is much too difficult to classify as it represents a flow of ambient and industrial sounds unrestricted by clichés which, together with the vocal and emerging streams of sharpened sounds, immerse listeners into a bizarre condition of restless dream.

When is it most likely that you descend into an unusual state of mind when your body is already immersed in sleep while your eyes are still observing things around you? The time is probably just before dawn, when the night still lingers within your senses and a greyish morning amasses over the horizon. That’s at least how they see it, the two composers whose music erases boundaries between dreams and visible reality. The project, according to them, was born ‘quite unexpectedly’ in 2008 inspired by wanderings at the Lithuanian seaside its creative germ taking root in the stories about sand-buried villages in the Curonian Spit, including the village of Agila whose name appears in the title of one of the duo’s compositions. In the spring of 2008, when the concept finally took shape, the band embarked on its first creative exercises. A large part of its soundset has been created by bulky guitar chords transformed into slow-motion drone / ambient current with the help of different effects. In strive for authenticity most vocal parts have been recorded in fields and forests rather than in a studio.

The band did not seem to want to perform live and, as if in an attempt to assert its existence, released its first home-made album Devyniems rytams auštant (While Nine Mornings Dawn). Predictably enough, it comprises nine compositions some of which feature saxophone parts by Monika Valkūnaitė. It did not take long before the recording spread throughout Lithuania while Leonardas Marozas made sure it crossed national borders. The album has been received positively and became a sought-for item in the world of underground music. This did not change though the duo’s principle of saying nothing about themselves in public. They may well have seemed dormant for the next several years, yet eventually it became clear the silence was a veil behind which new compositions were slowly coming into being and negotiations with the Finnish label Freak Animal were nearing fruition. As a result, their second album, Canine Visions IX, was released in April 2013 to demonstrate the duo’s attempts to broaden greyish horizons of dawn. It took one more year until the band agreed, rather unexpectedly, to perform live for the first time ever at the festival of alternative music Mėnuo Juodaragis (Black-horned Moon). The duo remains in the state of ‘silence’ for now but their silence might just mask the new sounds being born.