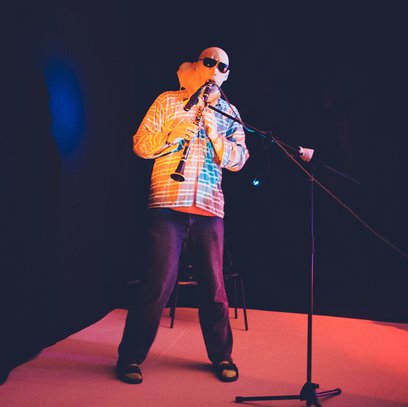 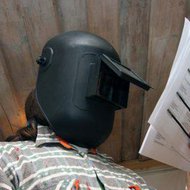 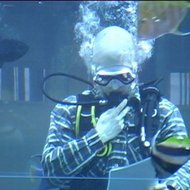 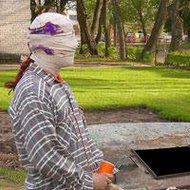 In the early 90s, Ramūnas Jaras was a leader of the early Lithuanian early experimental and avant-garde scene. He is responsible for the ground-breaking Lithuanian art-rock / avant-garde project “Echidna Aukštyn” (later also known as “Endiche.Vis.Sat”), avant-garde / post-folk music festival “Sumirimas” (later known as “Didelis pasaulis!”) and never ending stream of performances, music projects and collaborations. He is provocative, innovative and engaging. R. Jaras’ success formula involves satire and humour, atonal sound experiments and ritualistic instrumental melodies. Currently he performs solo or with a band of guest artists. A typical appearance of R. Jaras in concerts and performance art events is a mask on his face and a checked shirt.

Ramūnas Jaras is a performance artist, musician, writer, journalist and radio host. His manifold talent has revealed in all those spheres. For more than 20 years of his activities, Jaras has been seen and heard in all kinds of media – press, radio and television.

Ramūnas Jaras creates rock, indie pop, experimental and academic music and performs it in the concerts or makes recordings with the guest musicians. In order to make it clear for the listeners what kind of music they would be listen to, Jaras names his rock and indie pop music projects “Echidna Aukštyn” and the experimental ones “Endiche Vis.Sat”. He doesn’t have any specific name for his academic music (which is commonly neo-classical). He has been performing with “Echidna Aukštyn” style since 1990, and with “Endiche Vis.Sat” since 1996. Both “Echidna aukštyn” ir “Endiche Vis.Sat” were also the names of Jaras’ bands till 2001.

He worked in “Titanika” radio station as a presenter of classical music and as an editor of the art programme “Menopolis”. In 1992 he created a programme "Absurdo naktipiečiai". In 1994 he started to host “Tangomanija” show in “Litpoliinter” TV and in the radio station “Tau” had his own talk show. From 1996 till 2002 he worked in “Pūkas” radio station as a director and presenter. In 1996 he created a conception “Endiche Vis.Sat” which is devoted only for avantg-arde, whereas the music of “Echidna Aukštyn” became “more understandable”. This year he also organized the avant-garde festival “Didelis Pasaulis!” (formerly known as “Sumirimas”).

His literary works were published in the magazine “Jaunimo gretos” and the newspaper “Respublika”. In 2002 he graduated from the Lithuanian Academy of Music and Theatre and obtained the Master’s degree from there. In 2008 R. Jaras published a collection of stories “Dzen Dzen” (“Kitos knygos” publishing house).

Facing constant rotation of the members of his bands, he changed the names of the bands into the names which refer to his different styles. “Endishe Vis.Sat” is a musical conception (band of the guest members) created by Ramūnas Jaras in 1996 performing live and in the recording studio, playing experimental (noise, ambient-industrial, new age and meditative) music.

R. Jaras is more often seen in the performance art events, than in usual concerts. He prefers choosing unusual sites for his performances, such as the marine aquarium in the shopping centre, the bridge in the city centre, or the church in small village.