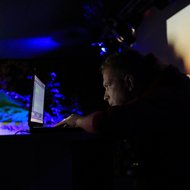 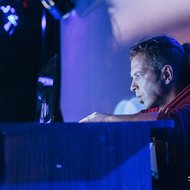 GyS’ (Gytis Skudžinskas’) threefold music career began with a no-longer-active electro-accoustic/avant-garde duo with Darius Gerulaitis called Ensemble SP (ŠaliKApalikau). The other two of his musical directions include various collaborations with other artists and his solo project Sable Mouvant that draws its listeners into the restless depths of drone and ambient. His earlier works encompassed noisier soundscapes and were often hued with the overtones of avant-garde. Gradually his sound got more relaxed, while the repetitive passages were being juxtaposed with the suspended ‘tone-objects’ and charged with a somewhat cold, anemic space. Nevertheless, electro-acoustic aesthetic still serves as the benchmark from which unfolds an infinite vastness of sounds, at times trembling with fever, and other times dominated by an endless echo of a chilly hall. Slightly more tangible sonorities coexist here as well; one may encounter low, pulsating frequencies and fragments of speech. All the above invites the listener into the premises of an acoustic ‘agnosia’, where one can feel the discomfort of unawareness and establish distance between the sound and its worldly (or otherworldly) source.

The sound layers generated by GyS latently point towards the other realms the artist is active in. Given his background in photography and other media, one may expect a visual narrative being weaved into his music. It impossible to be sure of its presence – one may only speculate. What is certain, however, is that music that raises speculations is equally capable of triggering images in a listener’s mind, which may bring us back to thinking about the likelihood of the visual narrative in GyS’ works. Perhaps ‘cinematography for ears’ is the most accurate description of his music.

The experimental avant-garde duo ŠaliKApalikau (with Darius Gerulaitis) was an outlet for Gytis Skudžinskas’ early sound explorations. The project was started in 1995 in Šiauliai and at the time was considered to be a novel phenomenon even within the ‘unconventional’ music scene. Their live shows borrowed from the performance art and often resembled a ritual. Nevertheless, the most important goal of their music was, in an avant-garde fashion, to deconstruct perception and transform associations into opportunities, or as the authors put it – ‘it was a perpetual preparation for a change’. Their soundscape encompassed the colors and sonorities of the industrial, electroacoustic and drone genres. Next to some small-scale events, the duet had performed at the legendary Kaunas festival Sumirimas organized by the avant-garde advocate Jaras Ramūnas, as well as at one of the earlier Mėnuo Juodaragis events. The recordings of the time include a split cassette with Laurynas Jukonis and his project Girnų Giesmės, a split album with the Latvian experimentalists King Lear’s Convulsions  (the 7-inch vinyl was released in Austria), as well as a CD-R entitled Calligraphy released by a small Italian label. The duo quietly changed its name to Ensemble SP and under a new name published three more records in collaboration with other artists and publishers.

Despite seldom live performances, GyS worked on a few interesting joint initiatives. Collaboration with the sound artist Gintas K entailed using each other’s work as a basis for new compositions. Due to force majeure circumstances the album was only half-finished and it features only Gintas K’s interpretations of GyS’ sound work, which nevertheless qualifies the record for a ‘partnership’ status. The other joint project was with Donatas Bielkauskas/d.n.s., a musician from the Lithuanian coast. It was where they recorded an austerely formatted CD of experimental ambient music. In 2004 the two artists, joined by Valdemaras Manomaitis, self-released the so-called Skalbėjų muzika (Music of Laundrymen) – which essentially is a documentation of the sound installation and performance that took place at a sea container in Klaipėda.

Sable Mouvant personifies Gytis Skudžinskas’ latest musical undertaking, which favors sustained sonorities and melancholic soundscapes. The technical description calls for terms such as drone and ambient, but the aforementioned ability of his music to evoke various associations is equally strong here, as it is anywhere else. The publishing house Autarkeia has released two Sable Mouvant records so far, a 7-inch vinyl and a CD. Today Gytis Skudžinskas continues his study of sound and actively collaborates with different artists. His latest joint initiative took place in 2015, when together with Gintas K he put on a sound performance at the Titanikas exhibition hall at the Vilnius Academy of Arts.