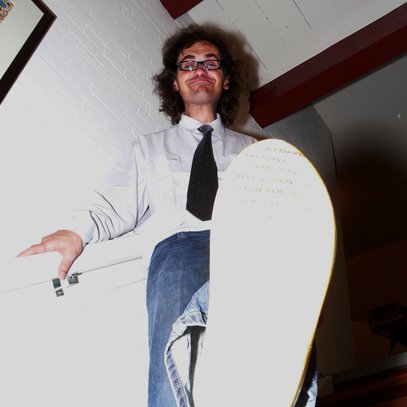 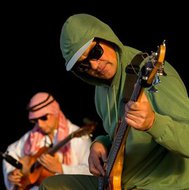 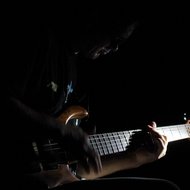 Raimundas Eimontas is one of the main figures of the early experimental music and non-institutional avant-garde movement in Lithuania, also the center-line of N!N!N! – the free improvisation and industrial noise group. His creative work, full of exploration and improvisation, stays far from confines and tries to break away from the frame of genre or paradigm of the sound, lets the music develop intuitively, without any intended structure, letting to unfold itself as a kind of meditation form. His multiple oeuvre gripe among experimental, psychedelic, electronic, improvisation, jazz, rock and other alternatives, and it always can be seen as an expedition of sound.
Ilona Klimaitytė

Raimundas Eimontas is a miscellaneous artist and multiinstrumentalist, balancing among experimental, electro, improvisational music, jazz, rock and other alternatives and also creating music in different genres: from his own compositions to theatre music, also music for movies and documentary. He is active in Lithuanian music culture too: worked as a carillon player in Kaunas, hosted radio and TV programs, worked as an organiser of different events, music journalist, gave lectures.
In 1990 together with a soloist Skaidra Jančaitė and viola player Arūnas Ambrazevičius he established a consort that included performances, Ab Antiquo, that in the year 1993 has changed into an improvisational music group RAA. Since the members fluctuated, the name has changed too, so for most experimental music listeners it is better known as the legendary avant-garde improvisation, industrial and noise group N!N!N!, that held performances in such Lithuania’s festivals like Jauna Muzika, Muzikinis Vyksmas, Akustinės Spalvos, Sumirimas, Didysis Pasaulis. In 2013 together with jazz musicians Marijus Butkevičius and Arnas Mikalkėnas he established free jazz group called MIG (Musical Inovations Group), and in 2014 together with the singer Eglė Gerasimovaitė started working in an improvisational music group LT, and a rock project OneManRock.
Different collaborations and his own creative work never stop at one particular genre or music tendency, and that is not coincidental, because of the paradigm of his oeuvre – to deny the paradigm. The objective of the artist is to create music, which is close to the Baltic culture and harmony, rejecting the institution that is typical to the West tradition. It is the music that connects past and present, particular moment, in which the creator and the listener are close to each other – that is the only way to really feel the music. So Eimontas focuses on the live music execution or theater performances, but not on the release of the records.
Raimundas Eimontas is one of the most active creators in Kaunas since 1988 when he graduated from Juozas Gruodis conservatory. Then he started playing the carillon, which he studied in The Netherlands Carillon Institute Dordrecht (2005–2006). He has arranged a lot of carillon and contemporary music concerts till 2001, held ten movements, performances and exhibitions, including opening events of Kaunas Jazz, performances in  Germany, Denmark, France, The Netherlands, England, Latvia, Finland, in 1994 he released Carillon-Impro cassette. Composer’s carillon experiments and connections with different instruments and media forms captured one famous Duch carillion player and composer Boudewijn Zwart’s attention. In 2006 together they released a CD called Chime’s Change.
Wide range of instruments and music genres motivate Eimontas to share his knowledge, so he spends a lot of time analysing the experimental and avant-garde music in public since 1990. His music programs have been broadcast in radiophone Vilniaus Varpas, in Kaunas’ radio stations Titanika and Kauno Fonas. The chosen format not only enabled to create informational-music programs, but also to elaborate the concerts, improvisations, in other words – to develop radio art. In 2002 he embodied a similar idea at the AR TV, where he hosted a show Poligonas, oriented to contemporary art, which assumed a TV art form. Eimontas has always raised notability of the experimental and avant-garde music through media. He colaborated with such newspapers as Kauno Diena, Laikinoji Sostinė, Nemunas, Dienovidis, Muzikos Barai, Tango.
Since 1997 he organized different events in favourable places of Kaunas artists (Mykolas Žilinskas’ Art Galery, Workshop of the artists of Šančiai, galleries of the Kauno Langas, dance theatre Aura, memorial of the Ninth Fort, VDU café Laviltė), working as a producer, sound director, scenographer, etc. Since 2003 together with the lawyer S. Dambrauskas he started multimedia art events named E-xpansija, since 2004 started to arrange the avant-garde music, poetry, films and performances cycle A Hard Day’s Night, since 2006 started to arrange an annual one-day festival AlfaBosas.
Title/Year