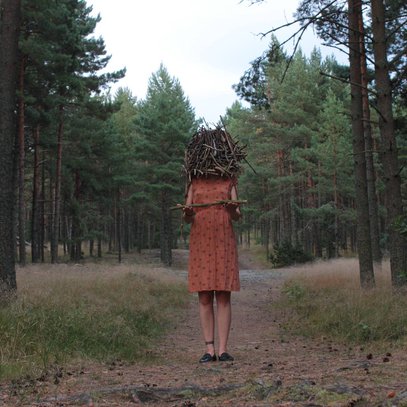 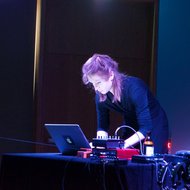 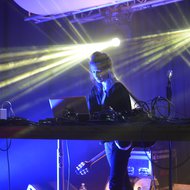 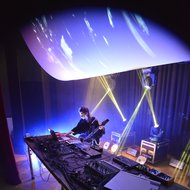 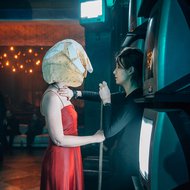 Daina Dieva is a performance artist, musician, sound designer, curator, translator, filmmaker and a screenwriter. She’s fluent in six languages, so in her music she often explores various forms of communication and tackles a wide array of topics that vary from notions of individual or collective identity, through to destruction, the balance of power and the limits of the human body. Her performances resemble a journey, a ritual of private transformation. In her music, Daina Dieva creates reverberating, atmospheric soundscapes, emerging not only out of electronic media but from acoustic sources too. She samples vocals and uses the recordings of the surrounding world, which she later incorporates into a deep drone sound aesthetic and creates sound blocks of dreamlike dark ambient and post-folk.

X
The Silent One

After graduating from the Vilnius University with a degree in Lithuanian and Italian Studies, Daina Pupkevičiūtė (a.k.a. Daina Dieva) continued her academic career at the Higher Musical Specialization School in Saluzzo, Italy, where she studied audio and video engineering. Later she interned at a film production company in Marseille, France, and worked as a sound engineer and a video producer in Turin, Italy. The above experiences had a significant impact on her creative language. In her music, performances or video art Daina Dieva makes use of versatile media and expressive tools.

Despite her many talents, she is primarily a composer and a performing artist.  She creates sound for art installations and other performance art pieces. Alone or in collaboration with other artists she often makes appearance at various Lithuanian alternative music festivals, such as Mėnuo Juodaragis, Centras, Speigas, Šerkšnas, Tundra and Kupolės, as well as different small-scale events. Her creative voice is unique for its gentle, yet simultaneously colossal sound. She combines clear and light timbres of voice, flute, kanklės (traditional Lithuanian chordophone) or guitar with a heftier drone effects. This music produces a multi-layered, cinematic ambience, whose thematic material is reminiscent of the archaic images of sutartinės (ancient Lithuanian polyphonic chants).
Curiously enough, her first live appearances took place not in Kaunas where she grew up and actively participated in various alternative music projects, but in Sardinia (Italy), where she joined forces with a local artist Svart1. In 2011 through 2012 she worked with Project Lapot, whose debut cassette Igneous Corrosion was released by a Finish label Obscurex. The band performed in Vilnius, Kaunas and Helsinki. Between the concerts in Italy and Finland, she often performed in Germany, Latvia, Estonia and Lithuania. In 2012 through 2014 Daina Dieva toured in Poland and Germany, where she performed alongside other Lithuanian electronic music authors, such as Oorchach, Bruzgynai, Aram Anam, Obšrr and Skeldos.
Daina Dieva has released 3 albums – Nakčia (2009), Incubi-Succubi (2009) and Leaving The Garden (2011). Soon she will announce the release of her fourth album, which she recorded with industrial ambient music author, Project Skeldos, with whom she had been touring frequently, including visits to Germany, Italy, Latvia, Estonia and Finland.
Daina Dieva is one of the most active performance artists in Lithuania. She presented her works at the Metamorphosis Land Art Festival and VilniusART fair in Vilnius, Simbolis performance art festival in Plungė, contemporary art days Kosminė Odisėja 2014 at the Vilnius Academy of Arts, and many other venues and occasions. She regularly represents Lithuania abroad. She appeared at the IPA Istanbul Platform for Young Performance Artists (June 2014), at the Month of Performance Art at the Berlin festival (May 2014), and the Bristol Biennial (September, 2014). Daina Dieva is one of the founders of CREATurE Live Art festival in Kaunas, and for 3 consecutive years she has been bringing some of the best European performance artists to Kaunas.
Her performances often involve blood, water, dirt, fire, wood, wicker, yarn and other materials that represent connection between the forces of nature and the human body. The existential topics she tackles deal with the human nature, the loss and the ways of coping, the closeness and detachment between oneself and the surroundings. It is reflected in the titles of each performance (Therapy I-IX, Nature-Morte, Bestiarium etc). Even though her performances tend to be interactive, they are primarily a form of personal therapy. Each performance centers on a human being (the artist) who invites the audience for a dialogue, and yet, in the process, undergoes a metamorphosis herself.
Title/Year