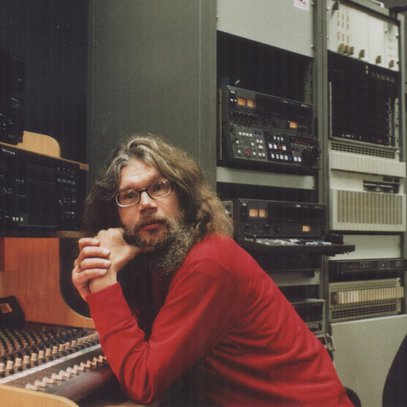 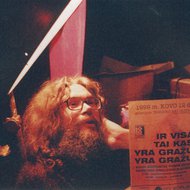 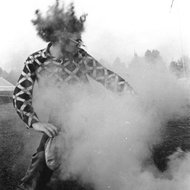 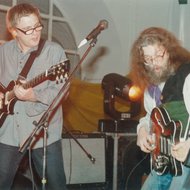 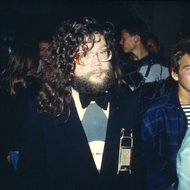 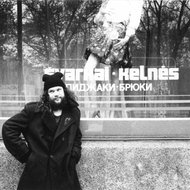 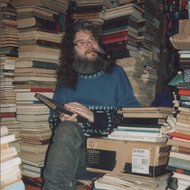 Most people associate Baras and his public persona with a wild hairdo and the nonconformist lifestyle. Artūras “Baras” Barysas’ (1954-2005) creative career began with his experimental films that were questioning social norms using irony, but it wasn’t long until he established himself as a prominent performer of ‘weird’ music. In 1987, together with the like-minded individuals, he started a band Ir Visa Tai Kas Yra Gražu Yra Gražu (And Everything That Is Beautiful, Is Beautiful), that undertook an aesthetic journey through a somewhat punk-rockish verdures until it formed a mature musical entity, whose soundscape, aside from the underpinning and overarching avant-garde, was spiced up with flavors borrowed from world, ethno, jazz, rock music and other genres. Its music was always full of theatricality and the performance art played an important role during live shows. It was Baras whose self-expression resembled the latter the most: on stage he would yield up to ecstatic madness, make spontaneous choices, and exhibit utter ignorance of the conventional music structures. It was the spontaneity and the music unconstrained within the stylistic margins that became the I.V.T.K.Y.G.Y.G.’s ‘visiting card’.  But as Baras would see it, it should be rolled up, stuffed with Prima tobacco and smoked through the nose.

The eccentric Artūras Barysas (1954-2005) drew people’s attention right away, both on the street and on stage. Underneath the public layers there hid spontaneous creativity and culturally peculiar behavior. During the Soviet era, during the times of information vacuum, it was expressed with a borderline illegal melomania and the ‘distribution’ of antique books. Moreover, his collection of unfamiliar, startling and shocking records, in a way, played a didactic role.

In the 70s Barysas was an active filmmaker. Up until 1988 he was a director, but also an actor, a cutter and a sound engineer of his own movies. The shifting political climate gradually ‘legalized’ the experimental, avant-garde and other unorthodox video narratives. The more favorable conditions resulted in multiple emerging independent film artists, but the new opportunities, paradoxically, have left the artist discontent. Vaguely quoting Barysas, the challenge of doing something new was gone, and the abundance of opportunities resulted in younger artists becoming increasingly dumb. Staying loyal to film, he never expressed fondness for video cameras and soon left the world of cinematography altogether.

In 1987, when the streets of Vilnius were filled with punkish freedom and rebellion against the stagnant Soviet reality, Barysas and his dear friend, painter Artūras Šlipavičius decided to start an avant-garde music band ‘that would have no parallels in the whole of Lithuania’. At first their works resembled a free jazz/art punk frenzy, while their music didn’t fit within any particular stylistic boundaries. Artūras Barysas, the author of illogical, surrealistic and Dadaistic texts, wasn’t so much of a singer, but rather a ‘roarer.’ That same year they had their first public, one can even say – chamber performance in Skuodas. In 1989 the band played in the capital city at the Day of Physicists Festival. That was when Barysas came up with the name Ir Visa Tai Kas Yra Gražu Yra Gražu (And Everything That Is Beautiful, Is Beautiful), which beat the alternative option: Užmušk Savo Artimą, Nes Ateis Tavo Tolimas Ir Užmuš Tave (Kill The Close One, Before The Distant One Arrives And Kills You First). The band’s membership was completed with a drummer Vaclovas Nevčesauskas, the guitarist Edis Butkus, while bass player Gediminas Simniškis took over the rhythm section.

Between the years of 1981 and 1991 I.V.T.K.Y.G.Y.G. released its first records – cassettes published by the Berlin-based Marabu Radio. Three years later Lithuanian label Bomba Reords re-released the recordings, which, by the way, were amongst its first ten published works. The album did not have an official title, but listeners often referred to it simply as the yellow cassette. The cassette contained the hits, most of which are known to these days. Peculiar and impudent vocal timbre of Baras became one of the most recognizable features of the band and his concert-time manners became an inseparable part of the ‘show.’

In 1996 the band performed one of its most important shows at the Sumirimas Festival in Kaunas and played a grand gig at the Town Hall Square in Vilnius. That same year their first CD Linkėjimai Falkenhanui (Greetings to Falkenhann) was released and presented the material that seemed a little unusual for rock music. Compositionally it featured a relaxed, uninhibited and at times even meditative sound-flow, interlaced (this time more thoroughly) with the vocal vowels of Barysas. In 1998 I.V.T.K.Y.G.Y.G was invited to perform in Poland at the Muzyka w Krajobrazie (Music in Landscape) Festival in Inowłódz. The performance featured, quite likely for the first time in history, amplified washing machines.

In 2001, at the Ragana Festival, Artūras Barysas was cutting the cardboard pipes into pieces and throwing them into the audience. That same year, in November, the band celebrated its thirteenth birthday and played a concert at the St. Ignotas Church before it was reconcecrated, thus the place was filled with a bohemian vibe. The pensive beginning was followed by a more abrasive sound that included different laundry gadgets again. Towards the end the atmosphere got frantic and the event culminated in Barysas cutting up his guitar. The audience claimed this reminded them of the cryptic American band The Residents.

Baras remained a prominent figure on the streets of the Old Town of Vilnius. He flirted dangerously with the eccentric looks, kept continuosly shaking up the established norms by performing, once in a while, with I.V.T.K.Y.G.Y.G. or simply by attending ‘weird’ music events.