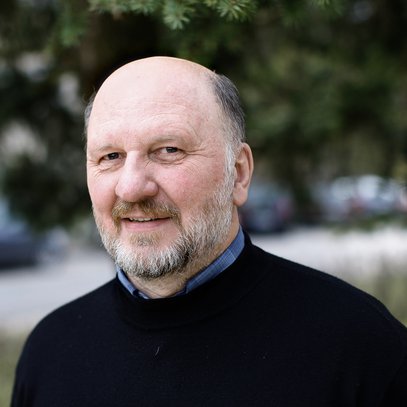 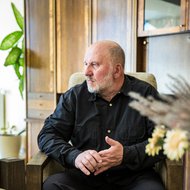 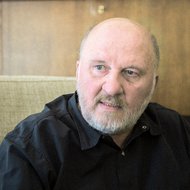 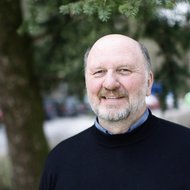 “Already at school I was the most devoted Beatlemaniac”, admits the composer, choirmaster, performer and music teacher Laimis Vilkončius. It is a kind of confession of love for the genres of non-academic or, how the composer himself calls it, “swinging” music, opening multiple directions of his creative career. Vilkončius works across different musical fields, creating compositions for choirs, pop singers and orchestras, music for children, theatre and cinema. And yet, the most representative form of the musician’s long-term activity is the song: quite many works of this genre composed by Vilkončius belong to the treasury of the most beautiful Lithuanian songs. His studies of choral conducting brought him close to choral music, and his works composed for choirs are full of memorable tunes and rich textures, as well as occasional jazzy motives. Having created a great many pieces of vocal music with lyrics by the most prominent Lithuanian poets, Vilkončius devotes special attention to the close links between text and music. During the creative process the artist does not force himself to the search for originality – for him, the most important thing is finding the means of expression that would empower the emotional impact of music.

Laimis Vilkončius (b. 1950) looks at the art of music from several different perspectives: he is not only a composer, but also a choirmaster, singer, teacher, and cultural manager. His first acquaintance with music took place at the Vilnius 1st Music School, in which the artist learned to play the piano, and while attending the Ąžuoliukas choir, he first got a sense of choral singing. It is not surprising that in 1968, Vilkončius entered the Lithuanian State Conservatory (today, the Lithuanian Academy of Music and Theatre), the choral conducting class of Konradas Kaveckas. Having finished these studies in 1973, he continued to study composition under Prof. Eduardas Balsys until 1976.

An important page in the long years of Vilkončius’ work in the field of culture is his organizational, teaching and performing activity. In 1969, he formed a vocal band of students of the Lithuanian State Conservatory, which later morphed into the vocal quartet Minuet – the band was active until 1981. The composer wrote his first pop music compositions in 1971–1973, while playing in the vocal-instrumental band led by G. Afanasyev, and later, by himself. Working as the chief conductor of the Vilnius Artists’ Palace from 1981 to 1985, together with the pianist Tomas Leiburas, Vilkončius formed a pop band of professional performers, and toured with this band both in Lithuania and abroad. Later in his career, he held several leading positions. From 1986, he worked as the Artistic Director of the Pop Music Department of the Lithuanian State Philharmonic Society. When the department was restructured into an independent concert organization, he remained to work as its head until 1992. Leadership skills came in handy when the composer worked as an executive secretary of the Lithuanian Composers’ Union and the director of the Arts Department of the Ministry of Culture and the Vilnius Conservatory. In addition to other activities, for three decades Vilkončius has been working as a teacher, mainly of arts/culture management. From 2004 to 2008, he was the dean of the Arts Faculty of the Vilnius College, and from 2009 to 2010, he worked as the head of the Arts Management Department of the Lithuanian Academy of Music and Theatre. Since 2016, he has been teaching at Mykolas Romeris University.

While talking about the basic influences on his work, Vilkončius mentions his affinity to the music of The Beatles, which started back in his school days and made a huge impact on his musical thinking. In general, the composer’s relation to music was influenced by the interaction of his academic studies, his predilection for the genres of “swinging” music, as well as his work as a sound engineer at the Lithuanian National Radio, which determined his open approach to very diverse works of music. Somewhat later, when he began to take interest in musicals, one of the most outstanding pioneers of this genre, Andrew Lloyd Weber, became a source of inspiration to Vilkončius.

Vocal music occupy the largest part in the composer’s biography. There is hardly anyone in Lithuania who would not be familiar with such songs by Vilkončius as „Ar išsaugosi mano meilę“ (Will You Cherish My Love), „Laivas“ (Ship), „Dar ne kartą“ (Many Times to Come), „Senos mašinėlės“ (Old Little Cars), and there is hardly a song festival in which his compositions would not be performed. His songs are characterized by catchy melodies and certain repetitive structures, both in vocal and accompanying instrumental parts. While looking for a synergy of music and text, the composer does not avoid putting the vocal and instrumental parts into a kind of opposition (this can be heard in his cycle for the baritone and bass guitar Clarity). The harmony of his choral music is not complicated, but is not devoid of dissonances and jazzy chord changes. Vilkončius’ choral music has rich and illustrative textures; sometimes the soundscape there is even somewhat theatrical, quite clearly representing the textual contents. According to the performers, Vilkončius’ style is easily recognizable, but the composer himself asserts that he is not looking for any special means of expression or techniques – in composing, he is primarily concerned about empathy and the search for emotional suggestion.

A separate field of the composer’s attention is music for children. He disagrees with the trend to compose music for children as if they were impelled to imitate the “emblematic” features of adults and to follow the established clichés. Having great appreciation for the poet Sigitas Geda’s ability to talk to children, Vilkončius composed quite many works for children with his lyrics. The composer sees children as little philosophers who are able to reason even about the basic issues of human existence, life and death in their peculiar language (it is also reflected in his opera for children „Paukštė“ (Bird)). Thus, while composing music for children, Vilkončius never attempts to use primitive, supposedly more easily accessible features of the musical idiom.

In addition to the above-mentioned opera for children Bird, other stage works by Vilkončius are quite well known. Among them are the ballet Peter Pan (2005) and the rock opera Eglė after the poet Sigitas Geda’s libretto. In this stage work, both fields of music – academic and non-academic – are organically connected, which also excellently reflects the composer’s refusal to divide music into fields. “I’ve never tried to find any value differences between classical and swinging music. There are both masterpieces and inferior works in both genres. It’s just reasonable to try your hand in any genre when you have a knack for it”, asserts the composer.