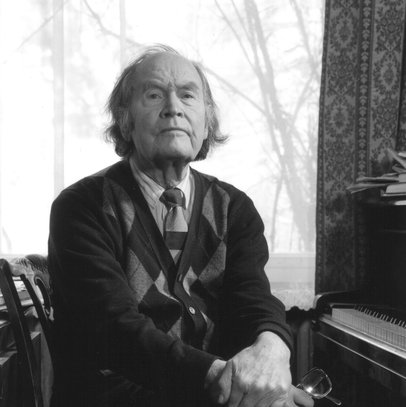 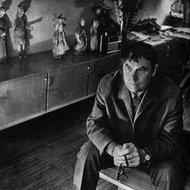 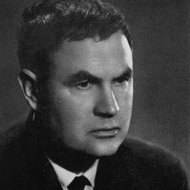 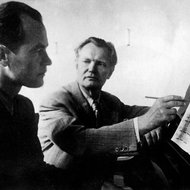 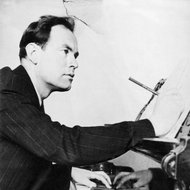 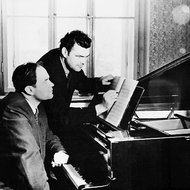 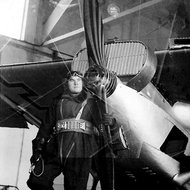 Like Bártok, Hindemith or Messiaen, whose music Julius Juzeliūnas (1916-2001) regarded as examples for his own work the composer developed his own composition system. Intense intellectual work and a change in political situation influenced his move from national romanticism to modernism in early 1960s. Like a true structuralist Juzeliūnas plunged into studies of Lithuanian folk music looking for typical melodic patterns, basic tones, their regular repetitions and relationships. On this basis he created his system of harmony, modal in character, which was set out in his doctorate On the Structure of the Chord, and consistently implemented in his creative work. Julius Juzeliūnas for many years was one of the leading composition teachers and his intellectual approach to the composition process has influenced generations of composers.

Julius Juzeliūnas (1916-2001) - one of Lithuania's most illustrious composers, a music teacher, a musicologist and activist in public affairs.

In 1944-1948 he studied at the Kaunas Conservatoire (Prof. Juozas Gruodis' composition class), in 1949-1952 continued his studies at the Leningrad (St. Petersburg) Conservatoire (Prof. Vladimir Voloshinov's composition class). Since taking over the composition class at the Lithuanian Academy of Music in 1952, he has trained over 40 composers. In 1972 he defended his doctoral thesis "On the Structure of the Chord" at the Leningrad Conservatoire. In 1979 he was awarded a Professorship. Between 1972-1987 he made various trips to study non-European musical cultures - Nigeria 1972, Burma 1975, Tunisia 1980, Congo 1982, Mauritius 1987. In 1988 Juzeliūnas became actively involved in the 'Sąjūdis' movement being a founder member and, later, a parliamentary member of this group. He served as Chairman of the Commission to investigate Stalinist crimes. In 1991 he was awarded the Lithuanian National Prize.

Juzeliūnas' creative skill and mesmerising artistry has won him international recognition. His ballet "On the Seashore" has been staged not only in the Lithuanian State Opera and Ballet Theatre, but also in Riga, Tallinn and Lvov. His symphonic and chamber pieces were performed in many Eastern and Western countries including Germany, Belgium, Denmark, Holland, Finland, Sweden, Italy and the USA.

The enormous volume of Juzeliūnas' compositions has at its centre monumental, large-scale works. Close attention to construction and links with folklore music, and especially with monodic songs and polyphonic sutartines, are all defining characteristics of his work.

Until 1960 Juzeliūnas wrote neo-romantic music with tuneful melodies, uncomplicated harmonies based on ancient modes. Subsequently, his works show a determined turn to a nationalistic modernism and more complex polyphonic technique which was the result of a more linear approach, typical of neo-classicism. Rejecting the direct use of folk melodies, he rather took their characteristic tones and built both horizontally and vertically on them. Juzeliūnas' technique of what he calls "cellular intonation", involves the systematic use of the chromatic scale, has elements of the dodecaphony, but is, nevertheless, modal in character. The composer has set out his harmonic system in his work "On the Structure of the Chord" which was the basis of his doctorate habilitation in humanities work.

Echoes of Juzeliūnas' research into the music of Africa and Asia can be detected in such works as "African Sketches", the string quartet "Raga a quattro" and in the wind quintet "Ragamalika".

Integrity of Man and Music. In memoriam Julius Juzeliūnas