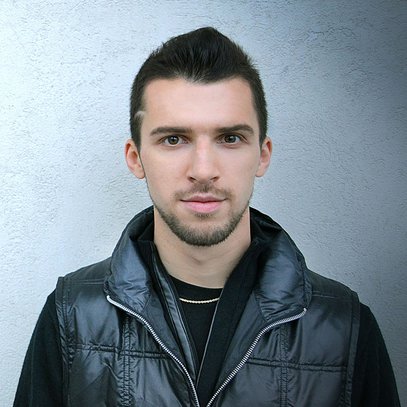 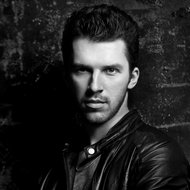 The music of Gediminas Gelgotas is fervently cruising the territories belonging to the lively microcosms of the European contemporary art scene and is beginning to permeate the North American expanses. His complex artistic language is based on a refined audio-visual aesthetic that is flavored with sometimes sharp, and sometimes gentle hints of (post)minimalism, and contains a universally relevant subject matter, integrated into the titles of his works (Everyday More, Never Ignore the Cosmic Ocean, What’s Unrobotizable). This syncretic mold of motion, human voice and imagery tends to unfurl in spaces that can be a little unusual in the context of contemporary music (according to the established notions), and is represented by Gelgotas’ own New Ideas Chamber Orchestra that professionally delivers and nurtures this form of art. In his 2009 personal letter to Gelgotas, Terry Riley wrote: “I like that beauty seems to be his guiding principle. It is what people are hungry for – music that has an element of peace. Gelgotas has a very unique and compelling compositional voice.”

X
To the Skies

In an attempt to become thoroughly acquainted with the art of music, Gediminas Gelgotas (b. 1986) explored and studied its various forms. From 1993 to 2005 he studied piano, trumpet and composition at the National M. K. Čiurlionis School of Art. In 2011 he graduated from the Lithuanian Academy of Music and Theatre, where he studied composition with Vytautas Barkauskas and orchestral conducting with Gintaras Rinkevičius. Later he continued his academic pursuits at the Hochschule für Musik und Theater Hamburg, where he studied composition with Peter Michael Hamel (2009–2010). Perhaps it was this ‘curiosity,’ or better, a strive to master all facets of music, combined with a long search for an individual voice that contributed to his broad and all-encompassing approach to music. On the other hand, it might have been his character that expressed tendencies towards artistic syntheses. Even his role in an act of musical ‘becoming’ is syncretic – he is simultaneously the composer, the conductor, and often, one of the performers.

In order to put his creative vision into action, Gediminas Gelgotas turned to an effective model widely employed by the American minimalist composers and in 2006 he established his own ensemble – the New Ideas Chamber Orchestra (NICO). Over the past 8 years the membership of the NICO changed frequently until it finally obtained its present-day format, composed of six young string players. NICO presented Gelgotas’ music in the European and American concert spaces, such as the Institute of Contemporary Arts in London and the platform for contemporary art 21er Haus in Vienna. His work Never Ignore the Cosmic Ocean was premiered in Berlin Konzerthaus with the Baltic Youth Philharmonic conducted by Kristjan Järvi in 2012, and soon after get started to migrate throughout European festivals: Young Euro Classics (Germany, 2012), Schleswig–Holstein (Germany 2013), Verbier (Switzerland, 2014), Beethoven’s and others. This event turned out to be a reference point for international career of Gelgotas.

In 2010 the composer signed a contract with an independent publisher of the contemporary classical music Peermusic Classical (Germany–USA), which publishes and distributes his scores.

Gelgotas’ musical language to some degree and intensity belongs to the category of (post)minimalism, and exhibits all characteristic, yet not necessarily coexisting, traits of (post)minimalist music. The composer believes in a ‘work of music as process’ principle. Perhaps it explains the continuity of form, as well as the absence of plot (and climax), slow harmonic rhythms and constant-endless repetitiveness in his works. That ubiquitous rhythmic drive, together with an economical use of musical material are essential elements to his compositional language.

In retrospect, it becomes evident that the themes of nature manifested in the general mood and prevailing lyricism that distinguished his creative output in the past, is now being replaced with subjects of global civilisation. It is followed by the frequent appearance of broken melodic segments, short, pointy sections, occasional rigid ‘roboticisms’ (in rhythm, melody and musical temper), as well as by the employment of somewhat aggressive, unconventional string techniques. Nevertheless, that sensuous nucleus, like leverage, remains intact.

Gediminas Gelgotas’ courageous musical ‘events,’ sometimes denominated as ‘contemporary rock wearing the dress of academic music,’ represent a syncretic form of minimalist art and are comprised of minimal choreography, lighting, scenographic and visual effects, and performing artists. Everything matters here: attire, hairdo, make-up, eye-contact, facial expression, body positioning, motion, as well as conduct generally attributed to a more conventional musician. Combined with music, these elements resemble a little theater, a show. And yet, the performances of Gelgotas and NICO neither attempt to fall under the genre of academic music, nor seek the label of a pop spectacle. They find themselves a better fit in that stretch called the ‘in-between.’